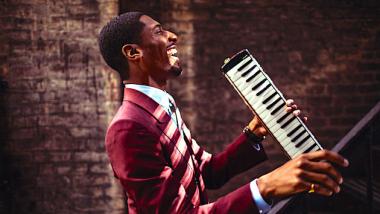 Jon Batiste, At Home in Every Genre

“When it comes to loving me, don’t stop,” Batiste croons on the new track. A simple, three-note piano theme drones soothingly, inevitably underscoring the strings that soar above, swan-like. “Don’t stop dreaming, don’t stop believing / ’Cause you know that our time is coming up,” Batiste sings, allowing his voice to rise to full throttle.

Batiste, who is also the leader of Stay Human, the house band of The Late Show with Stephen Colbert, draws inspiration from Jean-Michel Basquiat’s graphic artwork of the same title. Basquiat’s bright yellow painting emblazoned with bold text and street art images depicts and ultimately indicts the art and film industries’ two-faced exploitation and celebration of black artists and actors.

In an interview, Batiste speaks about the evolution on his album of Basquiat’s messages, the process of recording Hollywood Africans, and his past and future roles in the world of music across multiple genres, generations, and geographies.

Let’s start with the Cal Performances appearance you’ll be making Sept. 23 at the Greek Theatre with Wynton Marsalis and his Jazz at Lincoln Center Orchestra. It’s a tribute to Ellington, but are there other items on the program?

We’re going to do a range of the classics from the jazz idiom. We don’t have the setlist yet, but John Lewis’s music is something we always pull from. There’ll be a moment for something from my CD. We may even be able to create a new arrangement [of a song from the album] with the orchestra involved.

Are there specific ways playing with Marsalis challenges you?

I was about 18-years-old, the first time I played with the orchestra. So at this point, I wouldn’t say it challenges me. It feels familial. It’s a privilege to play with musicians who are excellent with the craft, while also feeling accepted. It’s like a good tennis match, like Serena and Venus Williams. There’s an excitement and it’s comfortable. When you’re comfortable, it pushes you to another whole stratosphere.

Recording Hollywood Africans was a push also, wasn’t it?

That’s right. We recorded the majority of the album in a studio that was once a church. It had high ceilings, a sprawling space that the piano sat in the middle of. It was pitch dark. We couldn’t see each other; we felt each other. It was intuitive. We played every song as if it were a performance. Maybe two takes, tops, of everything that’s on the record.

We read Zora Neale Hurston’s “High John de Conquer” to start the recording session. Then it was me channeling those words and the ancestors. The superpowers of blues and jazz music were a wealth of energy I could channel into the piano.

And writing the song, “Don’t Stop”?

Writing it, I wanted to make a statement to clarify. Is this the same message Basquiat was saying? It’s in line with what he was saying, but it’s the evolution of what he was saying. I’m saying we have to soak up the day. It’s almost a metaphor for soaking up the light and energy of love. That’s the only way we’ll give it out to other people.

My message [with the whole album], it’s almost the progression. It’s a nod to him and his message, but it’s also the evolution of what we are. It adds what we’ve become in the world and a statement of the divine blessing we’ve been given; music and creativity and the spiritual calling to bring people together. With whatever segregation or marginalization that’s going on, the goal is to bring people together.

The idea is people across the world seeing each other as the same more than as different. I’m making the statement not to say black artists are really marginalized or better even, it’s that we’re here to bring joy and life. It’s something we really need. I’m proud to be a light-bearer. The album’s a retrospective of what we’ve been through, but it’s an optimistic message and less of an indictment. It’s healing.

You’ve slowed the tempo of your restatement of Louis Armstrong’s “What a Wonderful World” (written by George David Weiss, George Douglas). Did that open up new colors or allow for a particular perspective on the work?

I wanted to create a meditation. The drone you hear in Eastern music [and music from other non-Western cultures] creates focus by playing one note over and over. I employed it in my left hand, playing the same note for the entire song so you zero in on the lyrics. That’s something I never felt was emphasized in Louis Armstrong’s wonderful version. I was bringing it into the 21st century and bringing it to our times. People need to slow down. In New York, you look around, everyone’s anxious or downtrodden. I wanted it to be something that in four minutes, you can sit and listen and get your peace of mind back. It’s a bubble of water and clouds and trees and lights. It’s a pure place. At our best, we’re connected to that. The song carried that already, but I wanted to get deeper into that sentiment. It’s almost a guide for people if they get into a rough place. Put the track on, close your eyes, find your peace.

“Kenner Boogie” is the first track and has special significance going back to your childhood, as does “Chopinesque.” Please tell us about those two pieces.

“Kenner Boogie” I wanted to put on the record because it’s the sound of the great boogie-woogie pianists. It’s a sound you never hear. It was an homage to my hometown. It just feels like home on many levels. The root of what I love to do is rhythm and blues and rock and roll. It’s innate for me, R&B blended with rock, that style is just home to me. It’s like the drum is in my left hand; the right hand wailing like Fats Domino. You know, he sang what was once called rock and roll. It’s my most comfortable, pure place. I put it first, right off the bat, so you can hear me.

“Chopinesque,” classical filtered through the blues, is another style innate to me. Taking the themes and melodies that you hear that were written long before jazz music; they have the blues in them. I’ve always had a knack for hearing the blues inflections in those classical pieces.

Did that so-called knack come from your cyclical explorations of Bach, an early influence you’ve mentioned?

For me, there’s an endless source of inspiration and composition in Bach. His Goldberg Variations for sure, for playing the piano and technique. Listening to his St Matthew Passion pushes me to high challenges. There’s so much depth in his work. There’s a level you can get to — a richness as a composer that you can keep pushing for.

The [Bach] Two-Part Inventions are something I first learned to play. Every time I return to one of those, there’s invention. It’s a hobby I’ve used for Late Show. Melodically, rhythmically, compositionally, it’s just two voices that are playing at the same time; in call and response or together. And yet, there’s so much implied. You can imagine an endless number of variations. You can give the right hand to a cello, the left to piano, or the low and high parts to a trumpet and a bass [respectively].

Before Bach, you were listening to video games.

Yeah, funny enough, I’ve learned a lot of about composition from my youth as a gamer. Playing video games, there was Yoko Shimomura, who worked for the gaming companies Capcom and Square. She did the music for Street Fighter II and is known for her Kingdom Hearts soundtrack.

When you play games, you’re sitting there for hours. As a kid, you’re receptive, absorbed in the music. Then later, at Juilliard, composing for jazz band, I realized a lot of the music I had absorbed was from her music. Of course, I was a student of the music of Aretha Franklin, Duke Ellington, Mingus [and others], but also of the Japanese soundtracks from these composers no one has ever heard of unless they researched it. The cultural blend of sounds is what I’m all about.

Considering young people and cognizant that traditional music education, especially in disadvantaged, underserved communities, is in constant jeopardy, what thoughts do you have?

Exposure is always going to be the best remedy for keeping the music alive. I don’t fear the music or arts will go anywhere. It will flourish more if we open it more to young people. My band, going on the road and in every city, we go to a school. [We do] not ask for money, but we expose them to a point of entry.

Your work as creative director of the National Jazz Museum in Harlem shares that entry point feature also. What initiatives receive the most enthusiastic response from visitors?

I really love how the community [of visitors] is multigenerational and representative of Harlem. There are people who’ve lived there since they were born; people who’ve moved there recently. [American jazz pianist and composer] Randy Weston, who recently passed away, played our first event. He made connections all the way back to Thelonious Monk. Then there are the young people recently, where we created a jazz video game out of thin air. We sat together and did all the coding and had a pilot at the end of the week. This was all done with 13-to-15-year-olds. We’ve done a TED Talk-like series mixed with performance to explain things about jazz. Lenny Kravitz was at one of those.

A point of entry doesn’t have to be a specialized program. That’s the true blessing of being on The Late Show: It’s music going into their living rooms. Whether they hear a 10-second bit I play on the Bach Inventions or a jazz tune, they write letters to me asking, “I like that music, where can I find it?”

With touring, new album promotion, running the museum, doing Colbert, and more, what would you like to tackle next and how do you replenish your energy?

I just had a great vacation. I went to a farm, shut down my social media access. Now, it’s developing work that’s deeper. Like the St Matthew Passion I mentioned at the beginning. We’ve come full circle. It’s [creating] work that’s rich in human emotion and capturing the experience of what life is all about. It’s not answering [life’s] questions but posing them in ways that are poetic and profound. Whether that’s in a symphony, a musical, a dance, drama, or even a collaboration with technology or fashion, I look forward to making bold and bigger statements on different platforms.