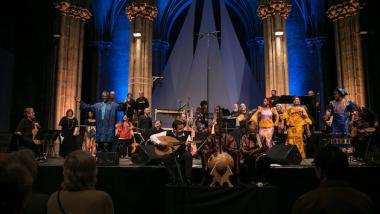 Jordi Savall and Ensembles Explore “The Routes of Slavery”

It’s Jordi Savall’s world, at least when he’s in town, and we just live in it, or wish we could. With each of his new recordings and/or stage productions, he’s offered new ways of listening to the world, often taking us to other places and other times, including the early music of his own native Catalonia and the rest of Europe, as well as the Near and Middle East. He’s conceived his latest project, “The Routes of Slavery,” as a showpiece for recent collaborations with African and Middle and Latin American musicians, as well as for his trademark social consciousness, which seeks alternatives to divisive boundaries and unjust practices.

He will perform on Renaissance treble viol with his Hespèrion XXI ensemble and La Capella Reial de Catalunya chorus that includes Arianna Savall, his daughter with the late soprano Montserrat Figueras. Savall brings “The Routes of Slavery” to Zellerbach Hall on Nov. 3, as part of the Berkeley RADICAL 2018–19 “Citizenship” programming strand. The Catalans will be joined by instrumentalists, singers, and dancers from seven former colonial countries, including Bay Area-based African-American actor and theater administrator Aldo Billingslea, who will narrate historical texts. Savall spoke with SFCV by phone from his home near Barcelona.

When you and I last spoke in 2012, you mentioned the continuing troubles between Catalonia and the rest of Spain. What’s the latest?

We continue to have a very complicated situation. An important majority of Catalans would like to make a referendum, to see what we would like to be [i.e., independent of Spain or integrated, but with greater recognition]. The Spanish constitution was made during the Franco regime, and if you can’t change the constitution, there is no progress. There’s no independent justice in Spain.

Has the situation in Catalonia prompted you to examine similar dilemmas elsewhere?

The music in Catalonia is as strong as the music in Ireland, Brittany, Scotland, Armenia, and like them, our songs express the desire to be part of Catalan culture. It’s ancient, since the troubadours’ time, and we would like that to be respected, but today, if you don’t have a state, you are not visible.

How does this compare with what you found in the former colonies which provided slaves to Europe and the Americas?

I found that so much about this was in silence. Nobody talks about these terrible moments in history. Many rich families, in Spain and in Catalonia, France, Holland, and other European countries, had become rich trafficking in slavery, surviving thanks to the work of slaves on plantations and in the mines, working without being paid.

Although this is the first time that you, and perhaps any other musician in your position, has put together an international program around the issue of slavery, this isn’t your first instance of looking at history through music.

When I do Armenian music, I am remembering the [Turkish] genocide. When I do Celtic music, I remember the invasion of the English into Ireland. Every moment of a music represents a moment in history, and this gives us a better conscience to see where we are going.

How has music served people who were enslaved, and their descendants?

Music is full of energy, it’s music with hope. It becomes an element of survival. When slaves were allowed to sing, they expressed their deepest emotions, their connections to their culture and their history. I found the same situation when I performed Sephardic songs: these songs came from the Middle Ages, but they have been sung every day for 5,000 years, even when the people were living new lives in Istanbul, Sofia, or Morocco.

How did you assemble your international cast for “The Routes of Slavery”?

Some of this music is as early as European early music.

I had noticed that composers for churches in the New World at that time made use of African melodies and rhythms. In our program, we have chronological narrations [spoken, in the Berkeley production, by Billingslea]. We start in 1444 [with the first major group of slaves, brought from West Africa to Portugal]. We have their songs, with the view of slavery by the Africans themselves, improvised by our singers from Mali. Then we’ll have Renaissance songs.

I assume that’s where your ensemble and the Catalan chorus will prevail.

I’m playing treble viol, because in some of these numbers, I’m doing the function of the first violin of the orchestra. We also have violone, sackbut, guitar, harp, and flutes.

Please tell us more about the rest of the program.

You will hear the African tradition from Brazil. There’s a letter from King Ferdinand the Catholic, written in 1505, asking his secretary to send him a hundred slaves. We use some texts from Thomas Jefferson and Abraham Lincoln, with the music responding, We have a slave song, “Follow the Drinking Gourd,” which is very beautiful to hear alongside the songs of 17th-century Mexico. And the program will continue into the 19th century, with the 13th Amendment of the U.S. Constitution, abolishing slavery and involuntary servitude. We will sing a song, “Amazing Grace,” composed by an Englishman but very popular among the slaves. And the last text is by Martin Luther King, which he presented in New York, in 1963, “Why we can’t wait,” asking for compensation for the 200-years work of the slaves. It was not a success.

Cal Performances is also presenting you in a public forum, earlier in the day at Wheeler Hall, on the theme of the Journey of Belonging. What will you want to say?

Today we are in a situation in the world where we cannot trust anymore many of our politicians. Now everybody has to take responsibility, and that means, knowing what happens, because we cannot anymore believe what people are saying to us.

I’ll be interested to witness how some of the texts in your show, which speak to the tragedy of slavery, stand alongside the beauty of the music, the dance, and the costuming.

For me, it’s to see all these people whom we haven’t seen. The owners of slaves didn’t speak with the slaves, didn’t see them as human beings. If they had listened to these people singing, they would have discovered that these people also had humanity.

[NOTE: Following the performance, the Catharsis Café will function as an opportunity for reception and discussion in the Zellerbach Hall Lobby.]

While missing his late wife and performing and recording partner, Jordi Savall continues to cross centuries, and cultural and geographic boundaries in celebration of early music. Next month Cal Performances will bring him back to the Berkeley Festival & Exhibition.