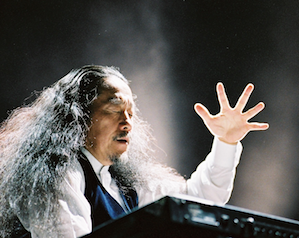 Kitaro: Nature and Sound Dream As One

His reputation as a founding father of New Age music is something Kitaro accepts, and arguably cashes in on, but really doesn’t have much use for as a creative artist. In fact, it’s something of a relief, at age 61, to be blurring genre boundaries with his first-ever Symphonic World Tour, launching on Valentine’s Day with the help of the Santa Rosa Symphony, at Weill Hall, a short drive from the home and studio he shares in Sebastopol with his musician wife, Keiko Takahashi. The concert is a benefit for the Sonoma Land Trust, the Symphony’s educational programs, the Everybody Is a Star Foundation, which links special-needs kids to entertainment professionals.

Born Masanori Takahashi in the Aichi Prefecture of Japan, Kitaro left home in his teens to become a songwriter, guitarist, and keyboard player with rock sensibilities. While touring with the Far East Family Band, he was introduced to an early synthesizer and German electronica by Tangerine Dream veteran Klaus Schulze. Kitaro launched his own career, and an important contribution to what would be called New Age, with a couple of solo albums and the soundtrack to an NHK Tokushu documentary series, The Silk Road. His global fame was furthered by a deal with Geffen Records and a collaboration with Grateful Dead percussionist Mickey Hart. Kitaro’s soundtrack for Oliver Stone’s Vietnam War feature Heaven & Earth won a Golden Globe in 1993, just before his signing with Domo Records, based in Los Angeles and Sonoma. Since New Age became a Grammy Awards category in 1987, Kitaro received nominations a record-setting 15 times, and a win for Thinking of You in 2001. Two days after this year’s Grammys, where the tux-bedecked Kitaro was nominated yet again for Final Call (Domo Records, 2013), he shared a bento lunch and conversation still influenced by his native tongue, at Masa Sushi in Novato, with SFCV and his close friend and Domo Records executive Howard Sapper. (Eva Sapper, Howard’s daughter, is a singer diagnosed with cerebral palsy as a child and the inspiration for the Everybody Is a Star Foundation.)

Tell me about the Santa Rosa program.

Kitaro: We have from Kojiki, which was several weeks on the Billboard [pop] charts, in 1990 [unusual for a New Age album]. The theme is the genesis of the world, to remind us how the world should be. And we’ll do Thinking of You, which won a Grammy. And from Silk Road, the title song we’ll do. First part is with synthesizers, then change to the Symphony. We’ll have four keyboards; two are my signature sound, analog, and two are digital, but still old, not too fancy. [He notes that he favors Korg synthesizers, and that he advised Tustomo Kaito, Korg’s chairman, on modifications of the instrument.]

HS: It’s been a long time since we played at home, so it’s a coming-out party for him, with all proceeds going back to the community. We’re protecting nature — Kitaro is a person whose life is really inspired by nature — and taking care of two forms of gifted youth: the classically trained, and those with development delays who are gifted in music. It’ll also be a baptism of fire, but [the Symphony players] have had the score for maybe three weeks, and should be well-prepared. We’re going to rehearse for three hours in the afternoon, perform at night, and then leave one day later for St. Petersburg. Then we’re going to Ukraine, Istanbul, Belarus, Poland, Romania, and a whole layover in Southeast Asia — each of those nights with a different orchestra.

Kitaro, four of your Grammy nominations were for the first four albums in your series The Sacred Journey of Ku-Kai. Please say more about that.

Kitaro is a person whose life is really inspired by nature — and taking care of two forms of gifted youth: the classically trained, and those with development delays who are gifted in music. –Harold Sapper

K: Thirteen hundred years ago, a well-known monk called Kūkai, he created 88 temples. It’s all Buddhism, but a different type [Singon]. Right after 9/11, I went back to Japan and start to record the temple bells. I went wintertime, because it’s much colder and the sound is much clearer. Everything was eight-channel, multitrack. I try to use each temple’s bells for a song. It’s my most expensive sampling patch, 88 different bells. We released four albums, but there’s still four more. I was using analog in Colorado, then when I moved here I went to digital, now I’m analog again, two-inch machines. And we also have vinyl. Sebastopol has a nice cutting plant [Mobile Fidelity Sound Lab].

Are you Buddhist? Do you do zazen [meditation]?

K: Yah. And also, I’m studying the tea ceremony. Every day, with my wife and me teaching each other. She’s a composer, too. After Thinking of You, we made Spiritual Garden [Domo Records, 2006]. That’s both Keiko and me. Also, at the September full moon, every year, I do drumming, almost 500 people, all night long. Kids and my parents came, the last years; my dad is 89 years old. We changed the place, from Mt. Fuji to Nagano, because we are counting [radioactivity] very high, and I am worrying about the kids.

HS: [to Kitaro] Tell him a little more about [the latest album] Final Call, which just got nominated for the Grammy, and he’ll understand your elements.

At the September full moon, every year, I do drumming, almost 500 people, all night long. Kids and my parents came. –Kitaro

K: Before this one, The Sacred Journey of Ku-Kai, volume 4 [also Grammy-nominated] was from 9/11. This one is from Fukushima. I lost a couple of taiko drumming friends by the tsunami [which led to the nuclear disaster at Fukushima]. And right after that, we went to Asia and Japan and immediately we made a concert to send money to the Fukushima people. My words are not strong enough, but my sound will work something, and that’s what the Final Call is, it’s against the people who control the power. And it’s still going on.

K: Yes! [He notes that some of his older friends, including Korg’s Kaito, seemed to have “said goodbye” — that is, died — as a reaction to Fukushima.] And so I decided, this is the time for my dream, with the symphony and the [Korg] analog keyboard playing together.

How did you end up in Sonoma County?

K: I used to have a big place in Colorado, in the Rocky Mountains, where we did so many albums with nature. But the place was very isolated, which means I worked alone; it’s really more intense. Nine years ago, I had a really bad snowstorm, one night 12-foot snow, and right after that, me and my wife talk about, “let’s drive to California and take a look.” We drove from Los Angeles along the coast, and stayed and ate [at different sites]. Right at that time, Mickey [Hart] called me, he was rehearsing his band, and we stopped by [Sebastopol]. I thought, wow, this is nice! This is another journey with nature. And in the Bay Area, me and my wife have a lot of friends — woodcarvers, photographers, painters, lots of artists. That’s another reason.

What engendered the New Age genre in the late ’70s and ’80s, and how has it changed over time?

HS: There was a paradigm shift going on the world. There was a lot of anger coming out of England, and the punk movement was at its zenith, and disco. Instrumental music was nowhere. Jazz and classical were in a very flat period, commercially. We believe that we gave a huge break to all instrumentalists, because we “captured the ear” again. People took time to listen to music and to the instruments. There was Windham Hill and our company and others, and all of a sudden people started listening to jazz again, and classical. And most of the artists we were working with came from serious classical training.

I hope every country, they understand, world peace is the basic message. –Kitaro

That’s the part which is totally misunderstood [about New Age], how deep the schooling and background are. We weren’t calling it “New Age” in the beginning, we were just making Eastern and Western fusion classical music. Then The Wave came in — KKSF and other radio stations — as places for it to be heard. We were just gathering musical and spiritual elements from around the world and putting them in a beautiful musical format. People could call it whatever they wanted, and if you look at Kitaro’s music, or Vangelis’ or Jean Michel Jarre’s and put it next to George Winston’s solo piano, these are as different [kinds of New Age] as metal is from bluegrass.

Who’s in the ensemble you’ll be pairing with the Santa Rosa Symphony?

K: Stephen Small is the conductor/arranger and pianist. I have four keyboards — my wife, Keiko, has two of them. We also have an electric bass and electric drums and timpani.

HS: The musicians, except for Kitaro and his wife, are coming here from New Zealand. We searched for a long time for the right person to actualize a symphonic work. Stephen has quite a background in classical music, and also scoring for rock. Kitaro has the guitar experience, so you have to understand him and his music to bring it to life in a symphonic way.

Do you have classical training, Kitaro?

Why is that fortunate?

K: Because synthesizers do not write it down. My section is an open space.

HS: Stereotyping [New Age] doesn’t understand either the improvisation or the composition involved.

Are there Japanese elements in your music, Kitaro? I hear them in your scales, pentatonic and otherwise, and in your rhythms and tempos.

K: Something there. But it’s not at the front; I think it’s behind, an invisible part of the music. It’s maybe spiritual. I was born in Buddhist country, and we grow up with rice paddies.

Will the inspiration for your tour be understood abroad?

K: I hope every country, they understand, world peace is the basic message.

And will you be playing more gigs at the Green Center?

It’s our local place, so maybe we can come back in the summertime, and they can open it up. I’d like to make something new.