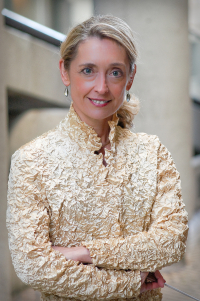 At a time when many performing organizations are struggling to stay afloat, and others are closing their doors altogether, there’s a young company in town gaining momentum: Opera Parallèle (or OP). It has found that audiences appreciate the opportunity to see modern works that are rarely performed or brand new, with high musical standards and casts composed of world-class singers. The company’s success is a reflection of its founder, artistic director, and conductor Nicole Paiement’s commitment to taking contemporary opera to the wider audience she so deeply feels it deserves.

Paiement is a guest conductor with companies such as Dallas Opera and Washington National Opera, and is on the faculties of the San Francisco Conservatory of Music and UC Santa Cruz. As the director of the Blueprint Series at the Conservatory, she is actively involved in the commission and execution of new works. Later this month, she will conduct a new production of a double bill of Kurt Weil’s Mahagonny Songspiel [(1927) and Poulenc’s Les Mamelles de Terésias (1944) at the Yerba Buena Center for the Arts. In June, the company will present the American premiere of Anya 17, by British composer Andrew Gorb, which contains a plot having to do with sex trafficking in the European Union.

Why did you decide to call the company Opera Parallèle?

Well, we used to be called Ensemble Parallèle, which I started a very long time ago. The first is, in French when we say “cinema parallèle” or something “parallèle,” it’s not your mainstream cinema or your mainstream music. I was really interested, at first, to look at all obscure music, not just 20th-century, and perhaps rediscover work from Handel all the way to the 20th century. That was one idea. The other idea was to work in parallel with other organizations and other art forms. I was really interested in any pieces that would require interdisciplinary activities. And I did a lot of recordings and a lot of work in that field. And then I was offered a position at the Conservatory and started to do Blueprint and realized that Ensemble Parallèle and Blueprint were a little bit doubling their efforts in terms of the repertoire and the research I was doing.

Also, at that time I started to do quite a bit of opera at UC Santa Cruz and I was feeling very connected to it as a medium. Opera has this great power to bring people to the 21st century in terms of the musical language. If someone is not so keen on contemporary music and at times if they’re not appreciating or understanding the musical language, perhaps something else will grab them and they’ll still be hearing that music and enjoying it because of another aspect of it.

How do you define “contemporary” opera?

We’ve debated a lot. I believe there is a difference between “contemporary” and “new” opera. In a larger, global way, I can look at operas that were written at the time of Handel and feel that they are extremely contemporary because they are innovative in the way they stretch the form of opera, or they will bring a subject matter that can be transposed to a 21st-century aesthetic and make us think about social issues. It’s not that I really think that Opera Parallèle would necessarily do Handel, but I do think that contemporary opera has a broader definition than “new music.” Yesterday, I was studying the Weill prior to our rehearsal and in one of the movements there is a phasing between the timpani and the brass, and this was exactly what was written by the minimalist people [late last century], and Weill did it in 1940.

Do you relate at all to the character Therese in the Poulenc who is frustrated professionally because she is a woman, since you’re a woman conductor in a field where most of the top conductors are men?

Opera has this great power to bring people to the 21st century in terms of the musical language. … Or something else will grab them and they’ll still be hearing that music and enjoying it because of another aspect of it.

It is kind of a hot subject since the New York Times article in December about women conductors. Interestingly, they did interview me and they also interviewed Dallas Opera, where I have conducted, but they didn’t write about that because they wanted to put the focus on the fact that there are not a lot of women conductors in opera, and it’s a reality. I tend to think that I have a kind of pioneer spirit and that’s why I like this contemporary music and I’m interested in pushing this contemporary music. And it’s musical language into all of society, not just this elite who understand it, but so it becomes something people really resonate with, much as they did in the 19th century. Music sort of fell behind at one point, and I think we need to get back on track.

I like to think that I’m also being a model for women conductors to do this, and I’ve had some very strong women graduate students who are making their way. I’ve always loved this opera by Poulenc, and I’m thrilled that we are doing it. I think the issue of gender is really interesting, especially that it was, I think, 1907 when Apollinaire wrote the play [it was written in 1903 but not debuted until more than a decade later]. Even then they were dealing with these issues. But I’m proud that I’m doing it and I’m a woman on the podium, because I think when Poulenc wrote it he never imagined a woman at the podium.

Speaking of being a pioneer spirit, what kind of freedom do you have with OP that you don’t have at a major house?

I have a kind of pioneer spirit and that’s why I like this contemporary music.

One of the things I really love about Opera Parallèle is that we really work as a team. We sit around the table and we discuss the concept. The costumer will research and think about it, and even the stage manager. There is a kind of holistic collaboration. When I go and conduct as a guest conductor, the director will ask what I think, but it is not as collaborative. In our meeting for Anya 17, our production in June, we are going to have the orchestra onstage incorporated in the set because we really feel that the orchestra is an expressionistic commentary on the story and is a part of the story and should be there. We were talking about the various instruments, and the set designer started to change the sets, and all of this could never happen when I go and guest conduct.

KT Nelson [co-artistic director of ODC Dance] is our choreography for Poulenc/Weill, and she’d never come to our meeting before. After five minutes, she was feeling comfortable enough to start digging in and giving her ideas, and it was so inspiring to see that the OP team could bring in someone new and make them comfortable to share their ideas, even outside of their area.

Is there such a thing as a “contemporary specialist” the way there is a Wagnerian specialist? Is there a special quality a singer has when they can really embrace this repertoire?

It depends. If we’re doing Wozzeck or if we’re doing Philip Glass, it will require a very different voice. But in terms of mind-set, I think singers who are interested in doing 21st-century music have to be very good musicians and have to learn this without a recording sometimes, which is not so easy. They have to have that mind-set of not being scared of it. … It’s a lot about attitude. It’s very daunting when you look at a contemporary score. But often once you start looking at it, it’s not as bad as it looks. But I would say in general, in many of the operas: a cleaner voice in the center of the pitch.

The Marine’s Memorial [theater in San Francisco] has around 550 seats and Yerba Buena Center around 757. Are you dedicated to keeping the company small in terms of the size of the orchestra and venue?

There’s a reason I have many other jobs. This is not my living — this is my passion.

One of our things is, we want to keep the intimacy of opera as part of our goal. The experience is so different when you’re sitting in a space when the singer is allowed to not always have to sing fully because they have to fill a huge space. It brings a whole different dimension to operatic singing, to let the singers at times sing gently and be heard. And also there is a new movement in opera, in general, where opera is directed in a much more theatrical way, and singers are expected to be actors taking on the role — not just the singing role, but the acting role. We rarely see a play in a 3,000-seat hall. … We’re very committed to finding spaces that work for the kind of music we want to do, which is intimate. The problem is that ticket revenue becomes very difficult.

You are proof that a company can be founded during a financially difficult time. What do you think is the biggest reason for your company’s success?

In 2007 we didn’t even have a board yet. We were just a nonprofit; we had three people that were working, and it was really just me writing grants [proposals]. And my goal was to mount an opera that would show the kind of work we want to do, because I thought, How can you have a board when they don’t even know what they’re getting into? So I worked at least three years by myself, raising the $250,000 that needed to be raised, so that was a very big commitment. … We worked slowly building [our] board that could really be the backbone of the organization. A lot of companies right away put a lot of money in their infrastructure in terms of staff, and we didn’t, which was hard. It made the board work really hard and that’s why they’re so special, because we basically had no staff. We just did it all by the generosity of making opera happen.

And now we’ve hired our first executive director. Most companies would have assistants and a paid artistic director, and I was not paid, and they put all this money into that and then the money is not going into their productions. The productions are not what they should be because there’s not enough money to go around, so we decided we would put all our money into our productions and really identify who we were. And from that, we could reach out to other foundations that would say, “Yeah, your product is excellent, we’ll give you money.” At one point it becomes critical to have a balance between those two, and that’s what we’re doing now. But we’re far from there. We still put a lot more money in the productions than we do on the staff, and we really are understaffed. There’s a reason I have many other jobs. This is not my living — this is my passion.