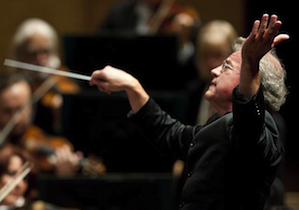 A much-loved return visitor to the podium of the San Francisco Symphony, Finnish conductor Osmo Vänskä comes this Thursday to share the music of his most famous fellow countryman, Jean Sibelius (the Symphony No. 6 and the Night Ride and Sunrise). But this time he’s also sharing the glow of a Best Orchestral Performance Grammy, awarded Sunday for his recording, on the BIS label, of Sibelius’ Symphonies Nos. 1 and 4, with the Minnesota Orchestra.

After beginning his career as clarinetist with the Helsinki Philharmonic, Vänskä served as music director of the Icelandic Symphony and chief conductor of the BBC Scottish Symphony, and as an award-winning guest conductor in nine countries. As he pursues an active international tour, Vänskä has chosen not to further discuss his resignation from the music directorship of the Minnesota Orchestra last fall, during a contentious labor dispute between musicians and management. But after a matinee performance with the Orchestre National de Lyon, on their home turf, he seemed happy last week, four days before the Grammys, to chat about Sibelius (1865–1957) and other topics, by phone with SFCV.

What did you perform this afternoon in Lyon?

Which is supposed to be our symphony, not theirs.

Ah-ha! But I’m more and more convinced that Dvořák was maybe so homesick that, in the New World, he was really thinking about his “old” home.

Though he clearly made use of African-American and Native American elements. And, talking about America, is there any chance you’ll make it to the Staples Center in L.A. for the Grammys spectacular?

That’s out of my hands.

How can that be? You were the leader of the talent.

Yeah, but we made that recording a year and a half ago. It was once in my hands, during the recording sessions, but now it’s like a child who is living its own life. If someone is given the Grammy, I’m grateful for that.

But shouldn’t it end up on your mantelpiece?

[Laughs] I won’t say anything for that. [In fact, neither Vänskä nor any member of his former ensemble was there to receive the Grammy, when the award was announced.]

You were previously nominated for your recording, a year earlier, of another pair of Sibelius symphonies. On your way to recording them all, how do you pair them up?

We did Nos. 2 and 5 [in 2012], and you may say it’s not a bad connection to have those two, maybe the most popular. Then you have 1 and 4; the music goes well together because it’s a big contrast.

Why No. 6 for your program with the San Francisco Symphony?

They asked me to do it, maybe because they haven’t done it for a long time. [Conductor Laureate Herbert Blomstedt recorded it with the S.F.S. for Decca, in 1990.]

I found a note that Sibelius had said that the No. 6 evoked for him the scent of the first snow of winter. Does that ring true for you as a Finn?

Oh! I think I have never heard that! But it could be. I’ve said that the music reminds me of clouds, which out there we can see very well; in a way, they’re very concrete, but we cannot touch them. They are going away with the wind, and we don’t have a real connection. There are many people who believe they are always seeing frozen lakes and snow and forests in Sibelius’ music, and I like to be polite and say, “That’s good to hear.”

For me, the Symphony No. 6 is more about an individual human being telling us about his emotions and hopes and ups and downs.

Because you’re hearing a lot, aside from the pictorial.

For me, it’s more about an individual human being telling us about his emotions and hopes and ups and downs. And my feeling is that [the No. 6] is not so much about the future as about the past. Sibelius was around 60 when he wrote the piece, and I’m 60 right now. The music is giving you some kind of feelings like, OK, I have to agree that I’m happy that many of my dreams have come true, but then there are also some dreams which haven’t happened, and I might have to say that they might never happen. There’s almost a melancholy present when we’re thinking about the music of Sibelius, but I think that he’s maybe accepting that “here we are!”

So you’re empathizing with Sibelius, from where you are in your own life.

But you have to remember that I’m only a performer. Those guys who are able to compose those great pieces of art — let’s say Sibelius, Shostakovich, Prokofiev, Beethoven — they have created things which are great gifts for human beings. I might have my own thoughts, but still, the composer is much bigger than any performer.

Hasn’t Sibelius been credited with a much bigger influence on his country than is the case with most composers? You were trained at an academy in Helsinki named for him.

God, it’s huge! When he was living and starting to work, you have to remember that Finland was under Russian power at the time, and we were four million people wanting to be an independent country. But the question was, are we good enough? In that picture, Sibelius was like a national hero; he was some kind of proof for everybody that the Finnish people could be good enough with other nations. He was not only a hero for the music lovers, and that makes him very important, even now. I still believe that there isn’t anybody born in Finland who doesn’t know who Sibelius is.

Do any Finns feel overshadowed by him?

Yah, there are a good number of composers who felt inside the shadow of Sibelius, but when somebody is very, very big, then even some good composers have to suffer. But I think that happens in every country. Let’s say Shostakovich, in his time in Russia: I’m sure there were many other composers who felt he was getting too much concentration. But I think Sibelius is also the reason there are so many conductors from Finland. Often our careers start outside Finland, where some orchestra has planned to do some music of Sibelius, and they invite a Finnish conductor to take care that the interpretation is authentic. And if the conductor does that first gig well enough, there is maybe a second invitation, with the music of Beethoven or Brahms. I’m sure I’m one of those, and my colleagues also. It’s a door-opener for us.

You’ll also be giving us Sibelius’ Night Ride and Sunrise at Davies. Is it important for us to hear this?

I think it’s always good to hear something from a familiar name which is not so familiar. When the night comes to its end and the sun is rising, it’s a spectacular moment in his music. It’s almost like a film, and maybe symbolic.

I think it’s always good to hear something from a familiar name which is not so familiar.

The two other pieces on the Davies program are Russian. Your publicity terms you a proponent of the “Nordic repertoire,” but do you also favor the Russians?

Well, they are our neighbors, I don’t know if it’s coming because of that.

At Davies, you’ll be conducting Stravinsky’s Symphonies of Wind Instruments and Rachmaninov’s “Rhapsody on a Theme of Paganini,” featuring another Russian, 22-year-old pianist Daniil Trifonov. It’s his first time with the Symphony. Is it your first time working with him?

Yes, and I have heard great things about him. During Christmastime, I was in Helsinki, and I heard him on the radio as a soloist [with the Finnish Radio Symphony Orchestra, under Hannu Lintu]. I heard from the players that Trifonov has more than technical things, and that everything seemed very easy for him.

So, is there such a thing as a “Nordic repertoire,” covering the countries of Finland, Norway, Sweden, Iceland, and Denmark? Could you put it into words?

Oh, that’s hard. In some issues, they are all working and acting together. One thing might be, they are all Lutheran. And a common thing for many composers is, they are using some kind of folk music from their area. Sibelius was very sensitive about that; he always said, “I have written everything, and I haven’t used any folk music.” But you don’t need to take it that way. He uses a lot of Karelian harmonies [derived from a historically united area across the current border of Finland and Russia]. And he uses sometimes 5/4 time. If you listen to the Karelia Suite, his first big piece [1893], it’s so obvious that it’s coming from the area where he was living. And I think it’s really a positive thing. But it’s the same thing with Grieg — and Mozart, and Schubert, and Beethoven. It would be really boring if everyone were writing the same kind of music.

Music should be happening at the social level, where you can have a musical dialogue, and I’m happy to do that with my instrument.

At this point in your career, you seem to be getting to a lot of these different countries, and beyond. Are you going to seek a base where you can settle down and be affiliated with a single ensemble again?

In my job, there is always an audition going. Every orchestra is checking all their guest conductors: Are they doing the job well, or not? The players are always giving their opinion. So maybe I’m visiting an orchestra and they don’t need anybody today, but they might, in two or three years. I resigned last October [from the Minnesota Orchestra], and I have to live; I need to do something.

What about spending more time with your clarinet?

I’d love to play a little bit more, and I’m planning to buy a new pair of them. I had to put the clarinet away in 2000, and then I started again two years later, because I started to miss it so much. I recorded the Quintet for Clarinet and String Quartet, by Kalevi Aho [BIS, 2012]. But that’s not my goal; my goal is to have a very good time with other musicians, and to enjoy chamber music. Music should be happening at the social level, where you can have a musical dialogue, and I’m happy to do that with my instrument.

Maybe you’d better bring it along to San Francisco, where we have a wealth of fine chamber musicians.

I know! Well, I’m always bringing it with me, because I have to practice, and that should happen every day.