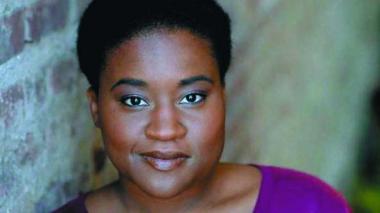 The legacy of four African American women leaders and influencers springs to life in the chamber music theater work, Ain’t I a Woman. Through spoken words, song, and live reenactments by actress Shinnerrie Jackson with music from the New York-based trio, the Core Ensemble, the 90-minute work March 15 at Knuth Hall on the San Francisco State University campus draws from historical archives and includes traditional Deep South spirituals, music from the Jazz Age, and works by American composer Diane Monroe. [Editor’s note: This event has been postponed, following ongoing concerns about the novel coronavirus in the Bay Area.]

Founded in 1993, the Core Ensemble currently features founder/executive director/percussionist Michael Parola, pianist Alfonso Hernandez, and cellist Sam Bae. Among the ensemble’s commissions of new works for the trio are productions that include theater and dance and are developed in part to draw attention to the real-life achievements of African Americans, Latinx, and women.

Jackson was raised in Georgia and makes her home base in Jacksonville, Florida. A graduate of Oberlin Conservatory of Music and the University of Tennessee, appearances in addition to her work with the ensemble include regional theater, film, and television. In a phone interview, she spoke of her experiences as an African American woman and actor, and about portraying the four women, off-and-on, since her debut in 2008.

What were the primary musical influences during your childhood?

My father was a pastor and my mother was a gospel singer, but in the 1990s, contemporary way: CeCe Winans, that sort of thing. All of my childhood, we sang in church. I also got into jazz vocalists because I really loved Anita Baker. I didn’t understand the kind of singing she was doing, but I knew she didn’t sound like everybody else I listened to. I fell into trying to figure out what that sound was. I started listening to Billie Holiday and Ella Fitzgerald. As soon as my mother discovered I could sing, that was it, I was up front, singing harmonies in church. But up to age 10, no one knew I could sing. It was that old, Southern Baptist sound. It sounds like the earth. It’s singing you hear from the congregation; not really trained, but everyone can sing and harmonize. There’s a deacon calling out, then the refrain with everybody singing.

The African American history in the education you received during primary school years: Did it include the vital roles and history of black people in American or were there gaps and information you only discovered as an adult?

I went to an all-black school. The principal, Miss Hill, made sure we knew our history. We did plays with kings and queens from Ghana. She made sure we knew who our ancestors were. Because I grew up in Atlanta, every January, we were going to the King Center. Rosa Parks was still alive when I was in school.

So my idea of African American history was very rich. When I came to these four women in Ain’t I A Woman! — I knew them already. I had seen Mary Lou Hamer testifying to the [1964 Democratic National Convention] credentials committee in a documentary, but I didn’t know how much she did for her own people in Mississippi. With all that she and the other women did and came up against, even with what I already knew, there was so much to find out.

You started performing this work in 2008 when you were in your 20s. It’s now more than ten years later. At age 40, what has changed most from your original experience?

My approach to the words and their determination. I was coming from an academic standpoint before. I wanted these characters to be refined, educated, nice. With age, there’s the actual experience of the world as an African American woman, the struggle of communicating the self to a world that already has an idea of who you are. It’s very difficult. To embody these women and communicate them to the audience, I’ve had to get the nuance of what they really were trying to say. That comes from my own experience of what happens when you try to present yourself to a world that already says, “This is what you are and this is how we treat people like you.” That particular struggle is something I’ve brought out. They’re no longer two-dimensional. For instance, with Fannie, I played her as a sharecropper who had to be taught when voting. I witnessed more of her story as I got older, so now I bring in more of her intelligence, wit, humor, and comedy. It’s not so much her darkness or frustration as her strength.

Surprisingly, we usually play to red states. I don’t take a poll, but you can feel what’s going to happen with a particular audience. Honestly, the people who bring us into their communities nine times out of ten want the community to be more diverse, to broaden their minds. They bring us to teach people about these African American women and history. That hasn’t changed; the audience skews toward conservative.

What has changed is the ease with which the information gets across. In 2008 it was easy. People said, “Yay! We have an African American president. We’re on our way.” Now, the convincing is harder. The questions are, “Are these people for real? Did this really happen?” There’s not an inquiry to learn more, there’s more of their needing to be convinced. In the Q&A it becomes a further teaching; in the past it was a celebration. Now, they ask, and I have to cite the sources.

What have you learned about each character as you perform the roles?

Sojourner Truth: Her essence? Being human. Not interested in convincing.

Zora Neale Hurston: Of course, disco. She’s fun. Sometimes when you read about her and when I play her, I try to enhance the intellect she had. Even though she wrote in the vernacular and some people mistake that to mean she was less educated, she had greater intellect than any of them.

Clementine Hunter: She’s like a train. No matter what, she was determined to keep moving, keep painting. She grew up without white suppression, unlike the other women, so that’s why she did it her own way.

Fannie Lou Hamer: Strong. If there’s a stereotypical African American woman, it’s Fannie Lou. She called out the BS, even in civil rights movement leaders of her time.

Kim Hines wrote the script. What are the challenges?

Kim Hines does a wonderful job of making the language and the autobiographical nature of the play very plain. She also shows many, many colors of the women. Even with Truth, who doesn’t have a full segment. I just do her speech, but she’s sort of the guardian angel of the whole piece. This show stretches me completely and I attribute that to Kim, because she wrote fully three-dimensional women.

Within the script itself, what are the delivery challenges speaking and singing as four characters who vocalize in different dialects and with different inflections? 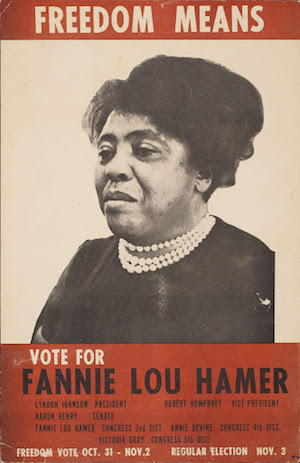 Fannie speaks high, Sojourner low. The challenges for me happened long ago. I listened to different interviews and got the essence of how Kim wrote in dialect for two of the characters —so those were hints. Clementine, there are very few recordings of her, but she learned French Creole first, then English, so getting that accent down, that’s the essence of how I play her character. With Zora, I used a Floridian Southern accent. There’s not too hard of an “r” and everything is lax. [For] Sojourner, there are not tapes but she spoke Dutch first, so I imagined a German Southern twinge to her voice. She knew how to read and write, so that influences the way I treat it. Someone who reads and writes speaks in certain ways. Fannie was easy because she’s all over the internet.

Of the songs you sing in the show, is there one with personal significance?

The end song is “Freedom Land.” I used to sing that song in church all the time. I didn’t know it had significance to civil rights. That was a special surprise. Every time I sing it, I think of my grandmother, her determination, her voting journey that was similar to Fannie’s. She and my grandfather were denied the right to vote and told the law was against it, although less violently than Fannie.

Bringing these stories to young people of color, people might assume it is the girls and women in the audience you most want to reach, but what about the boys and men? What do you hope this show brings to them?

That they can support women. I hope they can hear these stories and hear that these women went through hell, and that there’s no difference between what they went through and what African American men went through. Men can relate to their ambition, because every woman I play is fiercely ambitious. There shouldn’t be a disconnect. The hardships in fighting for civil rights and social justice were the same for all African Americans. They’re the same struggles we have now. I hope they learn to push past obstacles, just like these women did. 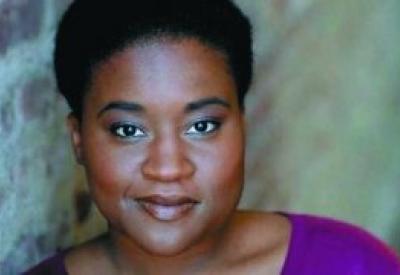 POSTPONED: CORE Ensemble in "Ain't I A Woman!"

PUSH Dance and Idris Ackamoor Set Out on Their “Motley Experiment”

Harlem Renaissance painter Archibald Motley is the inspiration behind PUSH and Acakmoor’s latest show together.

Soprano Julia Bullock’s revelatory one-woman show blazes with insight and emotion, and the soprano’s own power.