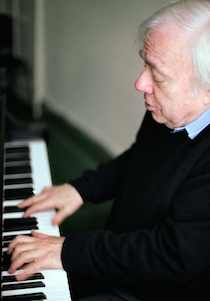 Artists On the Bench: This Week With Richard Goode

Richard Goode is someone you can truly call “A Pianist’s Pianist.” Pianists uniformly respect him, maybe even revere him. It has to do both with the way he makes music, and also with the way he’s made his career in music — a career remarkable for its absolute integrity, commitment, and dedication to the essence of musicianship and music-making. A much-beloved and frequent guest to the Bay Area, he returns to Cal Performances on October 26 for a recital of the last three Schubert Sonatas, a program that is the product of some of his longest and most profound musical explorations.

I sat down with Richard Goode to ask him for some of his secrets to making a good life in music.

Your career has had a somewhat unusual shape; you began as a chamber musician and later emerged as a soloist. I’m curious about how the musical seeds that you sowed in the chamber music repertoire have supported your development as a solo pianist.

Well yes, it was an unusual split, starting out in playing more chamber music than solo piano, and now playing more solo piano. It goes back to my studies with Rudolph Serkin at Marlboro, starting when I was 14. And Serkin, aside from being such a charismatic presence, was a real musical scholar and almost fanatically devoted to the score. And I would say that the two things that stuck with me the most from my years with him were the sense of commitment and intensity that he brought to his music-making, and the devotion to the score, to the idea of not letting anything go, to believing that every single thing in the score has meaning and significance, and can inspire your imagination. That it all starts from the center, with the score. You can go beyond, or underneath, or as far as possible, but you never cease to explore as the foundation of your work. And I feel that, if I’ve made progress during my life as a musician, it all comes down to learning to read a score better, to really pay attention to it.

The more I teach, the more I realize that teaching and playing, for me, are really the same thing. I explore the score with my students, and I explore it by myself. In fact, I’ve recently taken to playing with the music in concert. I enjoy the complete contact with the score in that context to be very inspiring.

One of the big challenges for musicians these days is that we are playing so much different music all the time: different programs for recordings, for festivals that might have a theme or something, new music — it’s a constant change of mindset, mood, focus. In an ideal world, how would we live with a piece of music?

Whatever you do, I think the ideal is always to go as deep as possible, to approach any score with the idea that there is always more to be gotten out of it and to remember that what you learn from one piece can always be applied to another.

If you had to name one piece of music, or body of repertoire, that will be your mountain to climb throughout your life, what would it be?

Bach: particularly the dance pieces, the Partitas, which I’ve worked on and recorded, and somehow the endless possibilities that Bach gets out of every dance form, how he manages to make all these new variations on rhythm in those dance forms; how each of the Partitas has a different personality, quite individual, completely different atmosphere.

The Mozart concerti, where, again, you have a form that Mozart established quite early on, and yet he continued to find marvelous new things to say within that form, developing quite fantastically the idea of the relationship between the keyboard and the orchestra, enriching it with ideas that are drawn from chamber music, especially the interplay of the keyboard and the winds. There again I find the differences in personality among these pieces to be astounding, from the monumental, the rather formal to the extremely intimate. There is just enormous emotional nuance and variation of mood in these pieces.

And Schubert. Taking on this challenge of playing these three last sonatas together is something very personally important for me. I’ve played all three of them separately many times, but I’ve always wondered whether I would have the emotional concentration required to play them together at one time — the extreme emotional range. I’ll give it a try!

Tell me, after all these years making music, are you still having fun playing the piano?

Partly it’s a question of trying to bridge the gap between how you feel when you are working on music, enjoying making music for yourself, and when youʼre making music for an audience. Of course itʼs inevitably different because something does happen in performance, there’s a heightening and an excitement. Maybe some of the balance I’m finding comes from having the score there, which makes me feel more the unity of the two enterprises, the private and public music making. And maybe I’m feeling more freedom to speak the music. I like the idea of the recital because it’s like a recitation, a speaking forth of the music, rather than the idea of performance: Here’s this event with the darkening of the lights and all the drama. For me the crux of the matter has always been to clear the way, to have as little in the way of the expression as possible.

You’re back in Berkeley this month again, as you have been so many times, going back to the ‘80s. Your visits here are always so keenly anticipated by the Berkeley audience, which I think is a very special creature — maybe a close relation to a certain kind of an Upper West Side audience….

True, except that the Berkeley audience is quieter than the New York audience! I love playing in Berkeley. We have great friends out there, and I love the series, the respect for the music that is central to the vision and programming at Cal Performances. And I do feel that the audience is always extremely attentive and interested.

And the bookstores are great too.