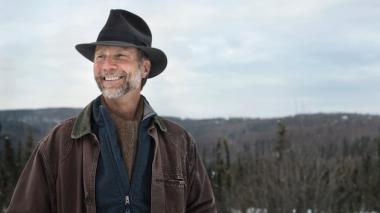 I'm a child of the sea — I was born on the Mediterranean coast, where summer meant three months of jumping in and out of the water. My new life in Northern California keeps me mostly out of the water, but I still get a special feeling during my frequent drives up and down Highway 1, as the steely expanse of the ocean accompanies my commute from San Francisco to Santa Cruz. Its surface is always different, yet always fundamentally the same; it reflects the changing weather and can awe us with its immense power, though ultimately it remains impervious and indifferent to our presence.

John Luther Adams’s Become Ocean, a work of his from 2013 and the most recent winner of the Pulitzer prize for composition, evokes these ineffable elements of the sea in music. It does so in typical Adams fashion, with multiple layers of sound moving at harmonically related speeds, and slow, massive dynamic surges that threaten to take over the entire sonic field.

The work is prefaced by a stark inscription by the composer, musing on life’s ancient emergence from the sea, and its possible eventual return to it, courtesy of polar ice melting and seawater rise. Like the inscription, the music is cyclical, ending up where it had started some 43 minutes before; closer inspection reveals a careful, palindromic organization, unfolding as three equally-spaced dynamic swells. True to the tradition of experimental American composition to which he belongs, Adams writes without an emphasis on romanticism or drama. Yet there is an undeniable majesty to this work, one akin to the spectacle offered by nature itself.

The recording itself is flawless, both in the execution by the Seattle Symphony under Ludovic Morlot’s direction, and in audio production. There is an accompanying DVD for those wishing to experience the piece in 5.1 surround sound (which plays alongside a thankfully understated slideshow of underwater images). Whatever the format, Become Ocean is a work of immense and hypnotic power. Highly recommended for listeners on all parts of the music spectrum.

The Law of Mosaics

With The Law of Mosaics, multi-purpose ensemble A Far Cry presents two substantial pieces by Andrew Norman and Ted Hearne, a pair of composers born only three years apart and representing a newer generation on the contemporary scene.

Norman’s The Companion Guide to Rome is a series of nine string trios depicting his spatial and emotional impressions from his favorite Roman churches (presented affectionately by the first name of their dedicatee.)

Despite the titles of both work and movements, the piece largely avoids sentimentality in favor of more abstract concerns. Particularly impressive is the facility with which Norman moves between styles, ranging from the expressionist gestures of “Ivo”, to fragile harmonies reminiscent of John Cage’s String Quartet in “Pietro,” to moments of more overt lyricism. Far from being derivative, Norman’s style is positively syncretic, and fittingly contemporary at that.

An interest in melding different idioms is also present in Hearne’s Law of Mosaics, which promises the “climactic moments from Adagio for Strings and The Four Seasons, slowed down and layered on top of one another” in one of its movement titles. In the accompanying notes (a refreshingly unpretentious email thread between Hearne, Norman, and musicologist Ryan Dohoney), Hearne points to hip-hop’s use of sampling as an inspiration for his own methods, which involved using a digital audio workstation to manipulate and combine the source recordings, before transcribing the results in musical notation.

There is an undeniable majesty to this work, one akin to the spectacle offered by nature itself.

The music emerges as an infectious network of quotations and allusions, beautifully rendered by the ensemble, here in full string orchestra formation. The musicians seamlessly conform to the rapidly changing styles of the sources, quoting inflections, timbre, and articulation in addition to themes and harmony, and often generating sounds that fooled me into assuming the presence of actual electronic tracks. A fitting if more boisterous companion to Norman’s offering, Hearne’s work completes an album that rewards both upon immediate and repeated listenings.

Hyenas in the Temple of Pleasure

To further affirm the variety and general well-being of contemporary American compostion, Andrew McIntosh’s debut monographic recording Hyenas in the Temples of Pleasure returns to more strictly experimental aesthetics. The album pairs the title track, a work for pianos and percussion commissioned and performed by Yarn/Wire, with a set of eight Symmetry Etudes for two clarinets and violin, split in two groups of four to flank the titular work.

The Etudes explore a wide range of acoustical phenomena, including just intonation, difference tones, and the relationship between pitch and rhythmic ratios. Each opens the door onto a magical microcosm, inviting the listener to participate in the discovery. I especially enjoyed the playful mensuration canons of nos. II and VI. This kind of sonic research attitude recurs like a leitmotif in the history of American music, and McIntosh’s fresh contributions to the genre belong alongside previous examples by Henry Cowell, James Tenney, and others.

The instrumentation of Hyenas in the Temples of Pleasure, on the other hand, forces McIntosh to partially forsake his reliance on rational tunings as a compositional anchor. The result is a freer, less systematic work, which maintains the same inquisitive approach to sound, timbre, and resonance. The production is meticulous, the soundscapes rich and immersive. One word of caution: Some of the sonorities, especially in the Etudes, can get quite intense in both volume and frequency — in some ways, this is music that plays you.