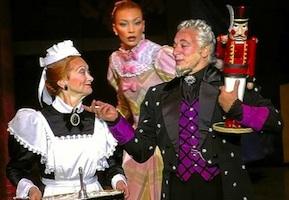 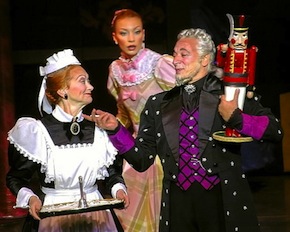 As Ballet San Jose prepares for its annual Nutcracker performances, which begin Saturday night at the Center for the Performing Arts, it appears that all is not visions of sugarplums. The company’s plans for 2012 have not been made public, leaving its dancers and artistic director in the dark, as well.

Under Dennis Nahat, who brought the troupe west from Ohio in 1986 when it was still the San Jose–Cleveland Ballet, the company has won respect — and often acclaim — for the quality of its performances and the breadth of its repertory.

But Ballet San Jose, like many arts organizations, is no stranger to financial shortfalls. It abruptly canceled its fall 2011 production. It is presenting a Nutcracker season of 10 shows, down from 14 last year. However, ticket sales, Nahat said in an interview on Monday, have been a brisk $25,000 a day.

The board of directors [recently said] that it has ultimate authority in all artistic matters.

Nahat, the company’s artistic director, said that in October he was formally notified by the board of directors that it has ultimate authority in all artistic matters, including choosing dancers and designating their rankings, casting roles, and planning future productions. At present Nahat’s sole duty is rehearsing The Nutcracker, he said, and no other productions (to his knowledge) are currently in the works or in rehearsal. The dancers have not been told of the company’s plans either, and questions to the management from their union representative have not been answered.

Ring in the What?

Board Chairman John Fry, who co-founded Fry’s Electronics and has donated more than $14 million to Ballet San Jose, and Executive Director Stephanie Ziesel this week declined repeated requests from SFCV for comment, saying that the company will make a public announcement about future plans on or around Jan. 3. The dancers have been told to expect information a few days before.

If there’s news at that time, Nahat won’t be in town for it. He’ll be in China, visiting Beijing ballet schools to work with students participating in the Tokyo Ballet Competition, his next stop. This will be his fourth year as a judge at that event. When Nahat returns, he’ll take part in the Silicon Valley International Art Competition, expanded this year to include instrumental Chinese music, modern dance, and ballet pas de deux.

Nahat, 65, danced at Ballet Theater and the Joffrey Ballet before founding the Cleveland Ballet with Ian Horvath in 1974. The company took up dual residency in 1986, and in 2000 ended its links to Cleveland. Ballet San Jose’s repertoire, according to its website, includes more than 120 works, of which 80 have original choreography by Nahat. The website said that the company performs three or more repertory programs in addition to The Nutcracker (also choreographed by Nahat, who is a frequent Drosselmeyer and an enthusiastic emcee) each October to May.

His ballets run the gamut from neoclassical to warhorses, as well as the cross-cultural collaboration Middle Kingdom — Ancient China (choreographed with Yong Yao). Nahat’s lavish Blue Suede Shoes, set to original Elvis Presley recordings, won an Emmy as a broadcast production. His version of Giselle was nominated for an Isadora Duncan Award as part of last spring’s successful spate of blockbusters marking the troupe’s 25th anniversary that also included Swan Lake and Carmen.

[Nahat’s 80] ballets run the gamut from neoclassical to warhorses.

If Ballet San Jose’s board is planning shows for winter and spring 2012, it’s difficult to see how such performances could take place. Rehearsals and other preparations — including, importantly, marketing and ticket sales — require weeks to months. Any possibility of fulfilling a 2012 season might then reside in a turnkey arrangement pairing Ballet San Jose with a larger, more prestigious company with ready programs, deeper pockets — and a different artistic director. The possibilities for such a pas de deux are intriguing: Fry’s philanthropy is well-known at San Francisco Ballet, where Ziesel used to work as associate director of development.

Meanwhile, Nahat said, he’s been rehearsing the company in The Nutcracker. “This is your time,” he said he tells the dancers. “We don’t know what’s going to be, but this is the moment to dance.”