Anya Garipoli has a supportive family. They understand the enormous challenges involved in learning to play a musical instrument at a professional level, especially one as difficult to master as the harp.

But in the midst of the pandemic, they’ve been asked to make a very specific, and no doubt painful, sacrifice. With in-person instruction impossible, Anya needs more than encouragement. She needs bandwidth.

“I’m using my family’s internet,” Garipoli, who is in the artist’s diploma program at Los Angeles’ renowned Colburn School, said from her New Jersey home. “If I’m having a lesson or a master class, I kind of beg them to let me be the sole person using it for the next hour.

“They’ve been a tad reluctant, but they have been very nice about it.”

Remote learning is a challenge no matter what the subject or grade level, but teaching music online is particularly problematic. Zoom works well enough for staff meetings, but to communicate what music teachers and students need to hear from each other, it needs to be modified, supplemented with high-quality, well-placed microphones, and accessed over a strong internet connection. And even then, it doesn’t work for everyone.

With these limitations in mind, along with the understanding that the coronavirus will impact our lives for the foreseeable future, the Colburn School has embarked on an ambitious effort to facilitate high-tech teaching and performances. The program will create infrastructure that will be utilized long after COVID-19 is a fraught but faded memory.

“We have spoken for years about wanting to have more spaces ‘lit up’ so we can do things,”
said Sel Kardan, Colburn’s president and CEO. “Now, we have to get this done. It’s an imperative. It has forced us to think what it means to be in the production business.”

The program has simultaneously proceeded on two tracks: Figuring out the best way to teach online, and electronically connecting the school’s performance halls and rehearsal spaces.

Like so many institutions, Colburn closed its doors in mid-March and sent its 130 conservatory students, many of whom live outside the United States, home. The 2,000 or so elementary or high-school students who take music or dance classes as part of its community program endured a similar disruption.

Within a few weeks, the school set up online instruction, with instructors teaching from their homes. But teachers and students quickly discovered the limitations of the medium.

“A lot of the faculty say they’re teaching differently, in the sense that they might spend a lot of time on sound quality when teaching in person,” said Kardan. “That’s not what they focus on now. They focus more on technique, musicianship, artistry, interpretation. From a sound perspective, it’s very hard to know exactly what’s going on [when teaching over Zoom].”

Over the summer, students and teachers experimented with possible ways to improve this situation. Some turned to an enhanced version of Zoom, which takes bandwidth away from video and moves it onto audio. While that has proven reasonably workable for some instruments, it was inadequate for others — including the harp, which produces a sound that dies away quickly.

So harp instructor JoAnn Turovsky and her students turned to Audiomovers, a software plug-in discovered by Nate Zeisler, dean of the Center for Innovation and Community Impact. He was watching a performance on Facebook by the brass quintet the Westerlies and was impressed by the sound quality. Curious, he contacted the group and discovered its secret: The players simultaneously streamed Zoom’s video and Audiomovers’ audio.

This dual-application technique requires a lot of bandwidth, as Garipoli’s parents are well aware. But the 23-year-old harpist is thrilled with the results. “I feel that I can successfully communicate with other artists right now,” she said. “Rather than hearing a garbled, distorted mess, I hear a harp!”

Compared with that improvised, trial-and-error process, the second, larger component of Colburn’s initiative — linking up more spaces on the school’s downtown Los Angeles campus — has proceeded more smoothly and methodically. Presciently, the school’s two performance venues, 420-seat Zipper Hall and 200-seat Thayer Hall, were equipped with the hardware needed for livestreaming in 2018.

“Each hall has three robotic cameras right now,” Kardan said. “We’re on Internet2, which is really fast, and we have a very robust infrastructure for our internal system. So, we can stream things quite easily, using only one camera operator.” Before the pandemic hit, student chamber music concerts were being streamed on a weekly basis.

Soon after the shutdown, Kardan began thinking about changes that would be needed when the school eventually reopened. He decided the best and simplest idea was connecting more rooms to the existing system, so that, for example, a teacher could be in one room and their student in another.

“There are three networks being created between the spaces: An audio recording fiber network, a video recording fiber network, and a very low latency monitoring system. Each space will have a monitor,” he said. “In principle, you could have a string quartet or a jazz ensemble with the players in four different rooms. They could rehearse together, and ultimately perform together, from those four different spaces.”

If that’s difficult to envision, Kardan offers an analogy: “It’s a little bit like walking into a commercial recording studio where each musician is isolated, and everybody is on a different track. But they still play together in real time.” 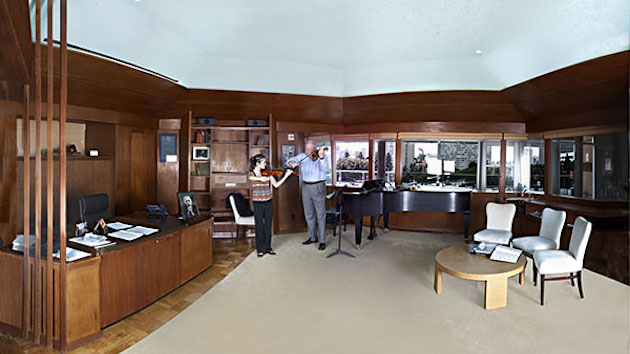 By the end of the year, six larger spaces and two smaller ones should be fully connected and tied together on the school’s network. That includes the one-time studio of Jascha Heifetz, which was reconstructed on campus after the legendary violinist’s death. Designed by architect Lloyd Wright, son of Frank Lloyd Wright, it holds only about 10 people, but is visually striking, and thus could be a perfect venue for livestreaming solo performances.

“Each of these spaces will function as a recording space as well,” Kardan added. “There’s a lot of demand for that as students prepare for auditions, which are usually in February and March. This year almost all music schools will have all-virtual auditions. The quality of the recording will be very important.”

Colburn also has a dance institute, and its dean, Jenifer Ringer, is excited that two of the newly linked-up spaces serve as dance studios. When students, who are currently taking Zoom lessons in their dens, basements, and living rooms, return to campus, she will have the option of placing a student in one room, and his or her teacher in another. A dancer could also collaborate with a musician performing live in the room next door, or down the hall.

Next year, yet another space will be added to the network: the school’s largest rehearsal hall, which is in a separate building. The cost of the project is not prohibitive — $200,000 or so for the already-completed first phase, another $125,000 for the current expansion. Kardan said money hasn’t been an issue, noting that “so far, philanthropic support remains strong.”

“It’s sort of amazing that we’re able to do all this,” he added. “Twenty years ago, or even 10, none of this would have been possible. A pandemic would have meant a complete shutdown.”

He identifies as least one silver lining from the pandemic: World-class artists who normally would be touring are at home, meaning they’ve been more available to teach master classes or otherwise engage with students.

“Jean-Yves Thibaudet is our artist in residence at the school, so he always gives classes,” Kardan noted. “But he has done much more this fall, since he’s been in L.A.” Ludovic Morlot, James Ehnes, Simone Young, and Jonathan Biss have also taught virtual classes.

Having such luminaries teach remotely “is a model we might continue, especially on campus where we can use our technology, including wide-screen TVs in the classroom,” he added. “We can use that to get access to an artist we otherwise couldn’t get access to.”

Long-distance learning is only one way Karden foresees using these newly equipped classrooms in the post-pandemic world. Besides a resumption of streaming performances, he believes students will adapt the equipment to their own needs.

“The flexibility of the spaces and the technology can lend itself to student supported projects,” he said. “We expect demand from them to use the spaces and to develop the skills to create their own projects and content. So, we believe the use of technology and development of content will become a greater part of the skill set that is developed by our students.”

Garipoli, and her family, look forward to that day.

“The problem is when I’m trying to record at home in our one-story ranch house with an open floor plan,” she said. “My poor dad is holed up in his tiny room trying to be quiet. I think they’re very ready to send me back to school.”

Correction: The harp teacher mentioned above is JoAnn Turovsky. Her name was misspelled in the original edition of the story.

The Colburn School to Partner With the Sphinx Organization

The L.A. conservatory is taking steps to expand Black and Latino representation in the music-school setting.

The JackTrip Virtual Studio that allows the Ragazzi Boys Choruses to rehearse in real time via the internet is now available to the public.

Ragazzi Boys Chorus Leaps Into the Future With Virtual Studio

The lauded choral program adopts cutting-edge technology that allows large groups of individuals to make music together in real time via the internet.

Education Emphasized in New Round of CAC Grants