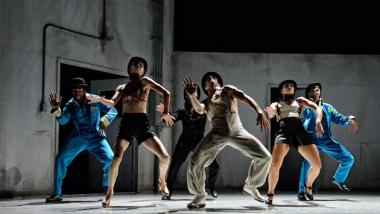 I first met Canadian choreographer Crystal Pite in a dance studio in Calgary, Alberta. It was 1993 and Pite was one of Canada’s up-and-coming contemporary ballet choreographers and my first impressions were of her Rapunzel-like golden tresses, a willowy body capable of exquisite articulation and fluidity, and a smile that came easily and was best described with the cliche, “sunny.” I was the ballet master assigned to assist and thereafter caretake Pite’s new ballet for the Alberta Ballet Company’s troupe of professional dancers.

As I recall, her age and the age of the dancers was equal: mid-twenties. In other words, she and the dancers were in the prime of their professional ballet dancers’ lives. But it was instantly obvious that Pite was at the start of an impressive, long-lasting choreographic career.

Lurking within In a Time of Darkness, the ballet she created to Shostakovich’s music, was a visceral, haunting statement powered by Pite’s intense intellect and a feral physicality that burst thrillingly and unexpectedly from her light-spirited, calm approach in the studio. It was, and remains, a remarkable experience in my 30 years of setting and rehearsing classical ballets and contemporary dance works. Most striking: Pite’s generosity and humanity in the rehearsal studio. It radiated and was absorbed by the dancers and projected between them onstage and to the audience during every performance of the ballet. Her work didn’t just make better dancers and please patrons: It created more compassionate, other-attuned people.

Flash forward two-and-a-half decades and Pite and her work have retained the glow that both smolders warm and blazes like wildfire. She danced for eight years with Ballet British Columbia, and performed with William Forsythe’s Ballet Frankfurt, and, in the years since departing the stage as a performer, she has created more than 40 notable works for Nederland Dans Theater I, Sadler’s Wells, Cullberg Ballet, Ballet Frankfurt, The National Ballet of Canada, Les Ballets Jazz de Montréal, Cedar Lake Contemporary Ballet, Ballet British Columbia, and other companies. An inveterate collaborator, she has combined forces on projects with Electric Company Theatre, Robert Lepage and longtime associates composer Owen Belton and set designer Jay Gower Taylor, among others.

Betroffenheit, a collaboration between Kidd Pivot and Electric Company Theatre Artistic Director Jonathon Young, comes to Cal Performances’ Zellerbach Hall March 10–11. The 120-minute work revolves around a protagonist named Young and a semi-autobiographical script written by the real life (director) Young. Post-traumatic stress, pain, loss, and coping related to the true story and tragic death of Young’s daughter and niece in a fire are the origin, but the work’s extended metaphors encompass the failure of words to express emotional suffering, the tangle of addiction, and the means by which humans endure.

“Betroffenheit” is a German term that references the wordless, immobilizing condition that people experience during and after sudden, extreme shock. Remarkably, what sounds grim or heavy is a production laced with laughter, the relief of a jubilant-then-macabre cabaret that represents the highs and lows of addiction with pink feather boas, tap dance, and salsa during “The Show,” and an underlying message of hope — or at least heroism in final scenes that illustrate the human capacity for survival.

In a phone interview sandwiched between touch-up rehearsals in Vancouver on Betroffenheit and completion of a commission for the Royal Ballet in London, Pite says, “I’m now consumed with the refugee crisis. I’m making a work about human migration. I’m wondering what my art can do, what should it do? What can be done from my place to open up a conversation?”

A new piece she will work on in the spring for Nederland Dans Theater I will further stretch her expression. “The statement that I made in new ballets last year was a risk for me, with an overt political tone. This new piece will extend my knowledge of conflict and questions of suffering, compassion, fear. Do I have the capacity to deal with those subjects? If not, how do I get that capacity?”

Asked if the combative climate of global politics is related to her inclination to be more overtly political, she says, “Yes. I feel motivated, inspired, angry.”

But just as rapidly as her energy threatens to suck the wind out of a conversation, Pite’s genuine warmth reappears. “Can we get one thing clear about Betroffenheit? One thing some articles have gotten wrong is that Jonathon’s script isn’t entirely autobiographical. The protagonist is struggling with addiction, but that’s not Jonathon’s story. The engine of the story is from his experience, but addiction we added because it’s part of the loss and pain circle we were exploring.”

The point made, Pite says the back-and-forth process working with a living playwright for the first time was wonderful. “Having a co-creator; to not be alone in the moments of decisions — it was a joyful process. Alive, earnest, a delight, despite the subject matter. His curiosity really set a pattern and path and we followed that. He’s living with the pain, but he had such curiosity.”

If Young is cloaked in curiosity, Pite’s background means that her classical training is “on me like a coating, like mud or paint that never can be washed off.” Her hard drive is ballet and a language she speaks fluently, but her choreography pushes against ballet’s traditional formalism at the same time that it embraces its internal structures. “I enjoy dancers who have access to classical training in their bodies. It’s an awareness and an articulation — not necessarily the mastery of it — that’s in their tool kit. I’m less and less interested in ballet as I go along. Most of what I do is push against its value systems.”

Early in the process with Young, the two artists established that the goal was to create a universal portrayal of human suffering and epiphanies that never occur. For that reason, Young’s voice as it narrates the nonlinear story springs from all directions: from Young to other performers, projected as if by doors, amplified from the corner of a room, falling from above. “It’s a voice decentralized,” she says. “It’s a stylistic and dramaturgical choice to move his character out of one body into many sources.”

Investigating sound and spoken text isn’t new for Pite, but the project has shifted something in her understanding of language. The failure of words to describe the magnitude of loss, addiction and trauma is expressed in a desperate flood of words that in the first section swarm like bees. Pite says it’s intended to confuse and disorient the audience, much as the character is confused.

“In the second section, there’s silence after the first section, where language comes out of everywhere like it’s a disease. By abandoning language, then finding it again, it’s a different language, one that helps to resolve our character. It’s a quieter tone, more distilled. It has a sense of rootedness and understanding. We hear it acoustically, instead of amplified from different sources. It lends a new kind of power because it’s authentic, coming out of Jonathon.”

Ultimately, the central character discovers and resolves that there is no magic spell to cast away pain. What emerges instead is a daily practice that Pite says is uplifting. “It’s not a lightning bolt solution. It’s coping with loss, day by day. I think that’s doable and something we all can understand. As artists, as dancers, we understand the idea of daily practice. To me, that’s hopeful.”