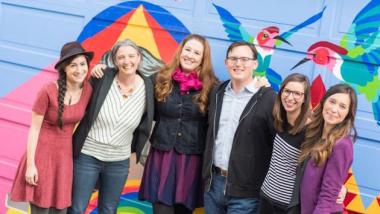 Frequency 49, a San Francisco-based woodwind sextet, is spearheading an evening of music on Inauguration night, Jan. 20, in support of civil liberties and individual rights. All proceeds benefit the American Civil Liberties Union; tickets are priced at $30. The concert will be held at 7 p.m. at the First Unitarian Universalist Church in San Francisco.

In addition to Frequency 49, the concert will feature performances by Wild Rumpus, Divisa Ensemble, and the Siroko Duo. The program includes Divisa’s performances of the Allegro from Josef Ceremuga’s Quintet and Rudolf Hartmann’s Variations on a Theme by Paganini.

Morris says Brokenvention is “a compositional fusion of baroque and contemporary styles. An ‘invention’ is a short composition using two-part counterpoint, typically written for keyboard; in Brokenvention, the two wind instruments play two-part counterpoint in the beginning and the end of the work. The invention is “broken” because the form is not an exact model of a typical baroque two-part invention.”

Holocaust Remembrance with Works by Korngold and Waxman

Ensemble for These Times (E4TT) is giving two concerts to mark International Holocaust Remembrance Day: on Jan. 27, as part of the S.F. Friends of Chamber Music’s Presidio Sessions series in the Presidio Officers Club, and selections from that concert on Jan. 17 at Noontime Concerts, in Old St. Mary’s Cathedral.

The concerts will feature works by composers banned in Nazi Germany -- Erich Korngold, Hans Winterberg, and Henriette Bosmans -- and new arrangements for E4TT from Franz Waxman’s The Song of Terezin for cello and piano, as well as others who perished -- Lajos Delej, Gyorgy Justus, and Sándor Vándor.

At the Noontime Concerts, there will be works by 2016 Call for Scores composers Polina Nazaykinskaya (from Russia) and Klaus Miehling (Germany). Performers at the two concerts are soprano Nanette McGuinness, pianist Dale Tsang, and cellist Anne Lerner-Wright. Admission is free at both concerts; for the Presidio, advance reservations are required.

No matter what age (over 21) or how well you trip the light fantastic, aspiring dancers can now join San Francisco Ballet -- for one week, at least, and at a price. Launching its first adult ballet workshop, SF Ballet’s announced purpose is “to keep ballet accessible to non-professional dancers and to the general public.”

The summer camp for adults will be held June 5-9: five days of ballet technique, repertory classes, educational sessions, and social activities. The all-inclusive price is $995 with early registration for all activities, daily catered lunch, Meet the Artist sessions with special guests, who will provide a look into the lives of faculty, dancers, and programs.

Says S.F. Ballet School Associate Director Patrick Armand: “We’ve had a lot of success with our drop-in classes for adults, and we created this workshop as an opportunity for anyone interested in a deep dive into the art form. With five days, we have the luxury of really exploring ballet’s many interesting and unique facets.”

Participants will take a mat or floor barre class as a warm-up, followed by a ballet technique class taught by Tina LeBlanc or Rubén Martín Cintas, two S.F. Ballet School faculty members and former principal dancers. After lunch, participants will have the option between the Ballet Focus or World Dance tracks. In the former, attendees will learn dances from S.F. Ballet’s repertory, such as corps de ballet work from Helgi Tomasson’s Swan Lake and pantomime from Tomasson’s Giselle. The World Dance track may feature styles such as Bollywood, West African dance, or traditional Chinese ribbon dancing.

Berkeley CC&O Doubles Up on Requiems

The Requiem in C Minor was first performed in 1816, at a commemoration service for Louis XVI of France on the 23rd anniversary of his beheading during the French Revolution. The piece was greatly admired by contemporary and later composers, Michael Steinberg wrote. Beethoven revered Cherubini as the greatest composer among his contemporaries, Bruckner copied out movements of Cherubini’s masses for study, and Schumann declared that the C Minor Requiem “stands without an equal in the world.”

The Suzanne and Lee Ettelson Composer's Award is $1,000 and a performance during Composers, Inc.’s 2017-18 concert season in Berkeley, with consideration for further programming. The deadline for applications is Jan. 15.