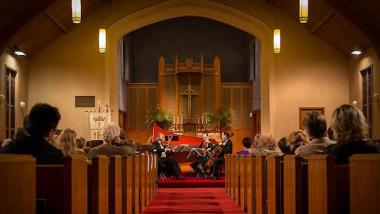 Would you like to take on an impossible challenge? Organize a season of chamber music in a church or any venue for starters, then up the ante by inviting, engaging, and featuring major musicians. Oh, and charge as low admission as possible — or even less.

The Bay Area is especially rich in such organizations, from Music at Kohl Mansion to Noe Valley Chamber Music, Maybeck Studio, Noon Concerts at Old St. Mary’s, Old First Concerts, and many more.

SFCV is revisiting Sunset Music & Arts at Incarnation Episcopal Church, 1750 29th Avenue, San Francisco. There, Mathew Chacko and Sally Porter Munro are co-directors of a concert season that’s going into overdrive during the next month. Chacko is also organist and music director for the church, Munro doubles as choir director — and both have “day jobs,” he with Wells Fargo, she with the San Francisco Opera Chorus and as an Alexander Technique instructor. They founded the music program three years ago, and have kept admission to the concerts to $15 (seniors and students) and $20 (general).

Next up in the series of 7:30 p.m. events is on Sept. 23, a Baroque chamber concert, with Natalie Carducci (violin), Cynthia Black (violin), Gretchen Claassen and Bruno Hurtado Gosalvez (viola da gamba), and Derek Tam (harpsichord).

St. Petersburg’s (the Russian one) Rimsky-Korsakov String Quartet returns to the church on Oct. 10, to perform Haydn’s Quartet No. 1 in G-Major and Alexander Gretchaninov‘s Quartet No. 4 in F-Major.

On Oct. 14, it’s the Shtrykov-Tanaka Clarinet-Piano Duo, of Maksim Shtrykov — born in Belarus, winner of the Artists International New York Debut Award — and Misuzu Tanaka — born in London, trained at the Juilliard School, specializing in the works of Leoš Janácek — playing sonatas by Brahms, Saint-Saëns, and Poulenc.

The Grammy nominated Emilio Solla TribuTango is due on Oct. 20, the trio consists of pianist-composer Emilio Solla, bassist Pablo Aslan, and bandoneonist Javier Sanchez. They will feature selections from their new album TribuTango.

On Oct. 21, at a 4 p.m. concert, bassoonist Friedrich Edelmann and cellist Rebecca Rust come from Munich, joining San Francisco-based pianist Dmitriy Cogan. They are called the San Francisco-Munich Trio, and will present a generous program of sonatas by Mozart and Beethoven, an Arabesque by Ibert, and rarely played duets by 18th-century composer Willem de Fesch and Robert Kahn of the 20th century.

One of the busiest of the city's busy freelance musicians, wind instrumentalist Nick Di Scala, was getting ready for a performance of Beauty and the Beast last week at the conclusion of the Woodminster Summer Musicals’ 51st season when a routine encounter with an audience member turned into a compelling moment:

As I’m going through my clarinet reeds, I hear some voices above and behind me. An older guy–a grandfather, it turns out–was explaining all the things I was doing to his granddaughter. (Turns out she was in first grade.)

He’s telling her about why I’ve got so many reeds and why I’m wetting them before trying them out, etc. All solid and on the nose. “Let’s go down and get a closer look.”

So they start asking me questions about the instruments and such. I put on my ambassador hat, which can be enjoyable from time to time. “Do you know what this instrument is? That’s right! It’s a clarinet. What about this one? No? It’s a bass clarinet!” [toot, toot]

The little girl, who was all strawberry blonde curls and big, geeky glasses, was also wearing a blouse that was loaded with gold sparkly designs. In part, I assume, as a bit of a costume for Belle’s yellow dress. She was remarkably composed and articulate for a first grader.

She explained to me how she preferred the animated movie version of Beauty to the recent live action one. The live version was too scary and she turned it off. Her grandfather explained how she wasn’t sure if she wanted to be a musician or a soccer player yet. He said how much she likes to watch musicals and that her favorite performers right now were Fred Astaire and Gene Kelly.

Me: Wow! That’s really great. Have you seen Singin’ in the Rain?

Moppet (suddenly all wide eyes and energized): “I LOVE Singin’ in the Rain!”

At that point, I’m sure we talked about one or two other things but, honestly, I don’t remember what they were because I was trying to keep from losing it. In fact, I did lose it a little.

You know, I put on a cynical, world weary, blasé attitude a lot, but I have a huge Achilles’ heel for innocent, unspoiled optimism and joy. Who knows what this little girl’s future holds for her? She might be a musician, or doctor, or a soccer player, or a grocery clerk, or the next Streisand. But I’m pretty sure she had a great time with her granddad watching a show she loved.

As a performer, it’s helpful to be reminded every now and then amid the show-after-show grind, that what we do can have a big impact on people. No, we don’t solve international crises, or fix economic and social woes. But we do have the power to elevate people’s lives. To lift their spirits — make them forget their troubles for a bit — to make them laugh or cry... to inspire them, perhaps. That’s not a bad way to make a living. Now I’m going to go practice some more.

Musical (and Other) Robots March On

YuMi, manufactured by the Swiss company ABB, was invited to the stage by Bocelli, who sang “La donna è mobile” from Verdi’s Rigoletto. During its first appearance, YuMi also conducted works of Puccini and Mascagni in front of the sold-out opera house. “Among the guests was ABB CEO Ulrich Spiesshofer, under whose leadership YuMi was developed,” says the press release. “The unique demonstration showed what can happen when advanced robotics meets the arts.”

I’ve been closely following the march of robots as they displace music performers (and many others). Robots may have become fully credible as long ago as 2008, with Japanese playwright Oriza Hirata’s  I, Worker, which features two robots as main characters. A personal favorite, Honda’s mobile Asimo robot, appeared in 2010 (and was featured in a terrific South Park episode). The beauteous HRP-4C singing and dancing robot is another favorite.

Berlin’s Komische Oper produced an opera featuring robots alongside humans, in a work called My Square Lady (groan). The star of the work by and with the German-British performance group Gob Squad was Myon, an autonomous humanoid robot, on a voyage of discovery through the opera company’s departments.

Without answers, the open-ended opera explored questions such as what makes a person a person and how could an object or a “simple life-form” be transformed into a person? Using the framework of Shaw’s play and Frederick Loewe’s musical, Gob Squad, Komische Oper, and the Neurorobotics Research Laboratory at Humboldt University in Berlin, Myon explored opera, as a “power plant of emotion” in all its facets.

So now it’s YuMi. What’s next?