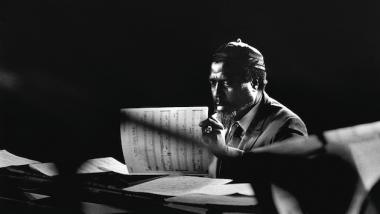 Jazz pianist Cecil Taylor practices ballet; guitarists John McLaughlin and Carlos Santana jam, the two musicians playing simultaneously on McLaughlin’s guitar at Berkeley’s Greek Theatre, after Santana walked onstage, unannounced; pianist/composer Thelonious Monk, in an image shot with a telephoto lens aimed through a 12-inch porthole opening in a stage curtain, is seen peering at a title composition as if rediscovering his own handiwork; Sarah Vaughan serves up a knockout performance in Monterey of “Tenderly” and, moments after, while backstage preparing for an encore, places an admirer’s hand over her heart and asks, “Is it still beating?”

Significantly, Oakland’s photos, which cover 30 years of jazz performance and music styles from swing to bebop to hard bop and beyond, were nearly lost forever. A torrential winter rain in 1990 caused a creek to overflow, flooding, for the first time ever, the backyard and basement of the home Oakland shared with his wife, Lynn Oakland, and their daughter, Alexis. Devastated by the sight of soaked cardboard boxes filled with decades of work, Oakland refused to even investigate the damages.

But 20 years later, his daughter — tiring of hearing her father talk about the need to “get his work out there” — pushed him to examine the negatives. “They were in sleeves, which was fortunate,” he says, in an interview from his home in Sacramento. “We took the negatives to a curator in San Francisco. That changed the whole attitude because he said they were salvageable. I had to get the more damaged ones restored, but it was a head start and got me out of the funk.”

Most often shot with high ASA-rated film in low-light situations, the photos are distinguished by their desirable graininess and a nuanced contrast that sculpts light and dark in expressive portrayals. He used a Nikon F, and later, a Nikon F2, with six different camera bodies and up to ten lenses. Although always aiming for the sharpest image possible, Oakland’s number-one practice was based on a principle. “I didn’t want to tie up the musicians with adjusting lights and positioning when they were on short time fuses. The naturalness of catching them in the moment — you couldn’t do that with all kinds of equipment. I thought it was unfair to the musicians to take more time out of their schedules when they were on quick tours or on the move.”

Underscoring the take-it-as-it-comes approach is respect, born of Oakland’s classical training on cornet. Add to that a lifetime admiration that sprang into existence during his teenage years upon hearing radio broadcaster Wes Bowen’s All That Jazz program on Salt Lake’s KSL Radio. “Before that, I hadn’t listened to any examples of jazz. It was completely foreign and compared with my classical training, it was completely different. Then, I learned they were playing without any [sheet] music at all. Hearing Red Garland playing the blues was so refreshing to me. At the time, I didn’t know the techniques he used to get those sounds, but the block chords he was distinctive for were one of a kind. It was like a revelation. It was like Blakey and his Messengers; you didn’t hear it in any other music. It’s like it came from outer space.”

At age 25, Oakland picked up a camera and, entirely self-taught, launched a successful, freelance-photojournalist career chronicling great jazz artists. In 1967, his black-and-white photograph of Rahsaan Roland Kirk performing on three wind instruments simultaneously at The Jazz Workshop in San Francisco landed on the cover of Down Beat Magazine. Since then, Oakland’s photos have appeared in Swing Journal (Japan), Jazz (Paris), and Down Beat, with work featured in 30 books including The Encyclopedia of Jazz in the Seventies by critics Leonard Feather and Ira Gitler, and Len Lyons’s The Great Jazz Pianists.

He’s the first to admit that as a musician he was entirely dependent on sheet music and shied away from joining any of his portrait subjects in a casual riff on a jazz standard during a photo shoot. “If you asked me to construct an improv solo based on a score, I was completely lost. The unlimited possibilities of skill and mind as an improvisor, it’s like a different animal. They can hear what’s already being played and figure out how their solo, when it comes, will meld with that; express in their own voice what they’re feeling and hearing. It’s like they have a different, extra sense.” But a camera frees up his improvisational muscles, and Oakland’s in-the-moment photographic prowess is similar to that of an improvising musician: a blend of experience, deliberate study, endless practice, and subordinating craft in pursuit of high-flying, never-again moments.

About his time with Vaughan, Oakland says that he most appreciated the singer’s broad vocal range, warm, alluring tone, and exceptional skill on the keyboard. “With all the great instrumentalists around her, they looked at her as one of the greats. She was very strict and opinionated about people playing around her. She’d stop a rehearsal and throw someone out because they weren’t playing a chord right. I was always looking for getting the most expressive feel she exuded.”

About Gillespie, Oakland says, “The thing about Diz is that he was much more than the clown looking to entertain the audience. The work he did on piano, he was one of only a handful of people of his class in the bebop era who actually played and understood everything about the notes.” The high energy trumpeter would, during rehearsals, take time to demonstrate chord changes or explain a tune’s harmonics to a struggling fellow musician. “He was a huge part of jazz history and stayed relevant to it for so long. He adapted to changes, brought out the Cuban and Brazilian influence that are a building block for what’s going on today.”

Monk discouraged journalists from writing about him and was difficult to get to know, according to Oakland. A loner, but not off-putting, Monk was a mesmerizing artist who brought out some of Oakland’s favorite images and whose independent spirit inspired respect. “He was shunned and criticized for his style of playing, but the fact that he could write these tunes and have people like Coltrane and others embrace what he was doing — it was really amazing.”

The only time he saw McLaughlin and Santana appear in performance together was their spontaneous, energetic, two-men-on-one-guitar show. The atmosphere he recalls was electric. “You could tell how much they enjoyed each other,” he recalls. “Carlos, most people refer to him as the great rock artist that he is, but so many of his sessions were with bona fide jazz greats like Coltrane, Wayne Shorter, Miles Davis. He realized great music doesn’t happen by staying with people you’d normally be associated with. To make your way as a headliner you have to show that you can hold your own with people other than [the musicians] others expect.”

Similarly, McLaughlin was expected to be “like a British version of Segovia,” he suggests. Instead, the classically trained guitarist applied his technical talent and expansive mentality to incorporate influences from Coltrane and other jazz musicians.

In the book, photos of Taylor reaching into a grand piano to pluck strings or create staccato beats with hammers were taken at distances nearly half a football field from the stage. Ballet dancer Mikhail Baryshnikov, performing in the 14-minute composition Taylor was hired to create for the New York City Ballet Company, flies through the air as if to defy gravity. “I couldn’t consider it a close encounter because the promoters didn’t allow photography near the stage,” says Oakland, laughing at the memory. But in a separate chapter of the book, with images taken after Taylor invited Oakland to his fourth-floor New York loft, intimacy abounds. Shown are Taylor, “lithe as a cat,” on the roof, mounting stairs, poring over his album collection, and elegantly seated with gaze directed at his hands as they stroke the keys on a studio piano.

Oakland hopes that Jazz in Available Light serves a purpose beyond simply showcasing the images salvaged due to a daughter’s persistence and a curator’s and publisher’s careful reconstruction and publication. From photos of Rahsaan Roland Kirk’s air-filled cheeks that supported notes played for minutes at a time without taking a breath to drummer Elvin Jones’s execution of invigorating, polyrhythmic perfection, unique celebrations of jazz greatness abound.

“Each of these artists featured in the book — some famous, some less known — has a way of expressing themselves as the surprise artists you came to the performance to see,” he says.

Although he finds much to admire in contemporary jazz musicians, he says that few compare to the artists of the ’70s and ’80s. “There’s a lot of great people out there today, but typically not the giants I covered. There’s phenomenal talent, but who would match up with Duke Ellington, Count Basie, Miles Davis? From swing to the bebop era, those big band leaders that got the jazz movement started; well, nobody today plays in the same vein.”

Copies of Jazz in Available Light and prints of photographs from the book are available on Veryl Oakland's website.

A Photo Essay From [email protected]

Robert Cahen, who died Monday in his Hillsborough home at age 86, captured iconic pictures of opera singers for six decades.