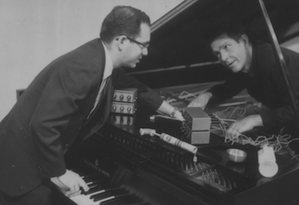 “I read Deleuze and Guattari, I read John Gray and E.M. Cioran and Bernhard’s Correction, I read Mike Davis and Donna Haraway and John Baldessari, I read Ballard and Baudrillard…. I practically memorized The Writings of Robert Smithson, for god’s sake, which is the exact equivalent of ordering a month’s worth of meals at a restaurant where John Cage is the chef.” — Jonathan Lethem, The Chronic City

Oona Laszlo, the intense, neurotic ghostwriter in Lethem’s novel, ends her outburst with an enigmatic reference to John Cage. Does she intend to convey that Smithson’s writings are empty, like Cage’s famous “silent” piece 4'33", hence that chef Cage would serve empty plates? Or does she intend to evoke the randomness of Cage’s “chance” music, implying that chef Cage would provide aleatoric meals?

In fact, John Cage was a meticulous chef whose meals I always enjoyed. But Lethem’s cathartic cornucopia of cultural capital confirms Cage’s canonization from composer to cultural icon — recognized by many but seldom understood.

In this, Cage’s centennial year, concerts, articles, and tributes are sprouting worldwide like mushrooms after a rainstorm. And what this flurry of activity demonstrates is that Cage’s influence is as important as his compositional legacy. Certainly that was the case with me, and so, rather than adding another survey of his accomplishments, this essay draws on stories from my personal association with him.

May 15, 1958: The “25-Year Retrospective Concert of the Music of John Cage” at New York City’s Town Hall was a shattering experience for this 18-year-old high school senior preparing to study composition at Eastman School of Music. Sponsored by Cage’s friends Robert Rauschenberg, Jasper Johns, and others, it was packed with the city’s musical and artistic elite. A watershed event, the concert was later issued on a box set of LPs, and is currently available on CD (Wergo WER6247-2). 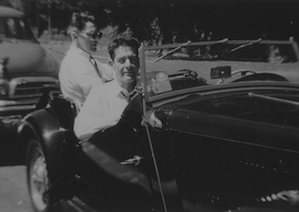 The highlight of the evening, for me, was the incredibly beautiful Sonatas and Interludes for Prepared Piano, played by Maro Ajemian. By contrast, the chaos of the recently completed Concert for Piano and Orchestra was mystifying. Even shocking. What had happened to Cage in the decade between these two works?

Fall 1960: John Cage was not mentioned in any course in my curriculum. When, finally, in the advanced music theory course, students were given the freedom to explore the work of a single contemporary composer, I chose Cage. Given the dearth of research material, I wrote to him, asking if he’d be willing to meet with me and explain his musical development. A response arrived by return mail, suggesting a weekend at Wesleyan University, where Cage was in residence writing his first book, Silence.

That visit was literally life-changing. Cage could not have been friendlier, more generous, or more open, teaching clearly and concisely each step he had taken from style to style. He explained the square-root form he had invented for percussion music and demonstrated the “prepared piano,” a modification he invented to substitute for a percussion ensemble in dance accompaniment. The modified instrument not only clinks, clanks, and clunks, but when one or two screws are carefully inserted between the multiple strings of a single “note” a three-or-four-note chord appears, which he called an “aggregate.” These aggregates can be tuned to create different “chords” simply by sliding the screws between the strings until the result sounds right.

Like a magician pulling a rabbit out of a hat, Cage opened the score of his String Quartet to show that its unusual chords, not following any traditional harmonic theory, were aggregates, treated just like prepared piano tones. The chosen aggregates appeared each time in precisely the same form — no inversions or other modifications permitted. Like other modernist composers, Cage had invented a system by observing compositional limits other than those inherited from classical tradition, creating both a challenge and a unique sound-world. His “indeterminate” music achieved the same ends through different means.

Cage could not have been friendlier, more generous, or more open.

Asked about his “chance” music, Cage said he much preferred the term “indeterminacy,” and distinguished between music indeterminate with respect to composition, and music indeterminate with respect to performance. He explained that his music since the mid-1950s was primarily indeterminate in composition, with the intent to remove the composer’s ego from the process and let sounds be themselves. Performers, however, had little if any freedom, and were expected to follow his scores precisely. Some of his works are incredibly difficult (such as The Freeman Etudes) and require dedicated, virtuosic performers. 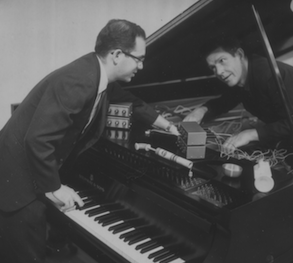 Cage explained his path to this music through philosophy, citing Meister Eckhart, Sri Ramakrishna, Daisetz Suzuki, and the ancient Chinese book of divination and wisdom the I Ching. Cage suggested in parting that I should consider studying Chinese so as to read the I Ching. in the original, which he was unable to do.

Downtown Rochester and Eastman were claustrophobic, and the prospect of studying at the University of Rochester, in the suburbs, was appealing. I learned that Chinese was being offered for the first time, and signed up immediately. Because of this language skill, a scholarship materialized for me to the East-West Center in Hawaii, incredibly attractive after Rochester’s endless winters. There I began graduate study in ethnomusicology, an unexpected but rewarding career, thanks to John Cage, guidance counselor.

Early Winter 1963: Returning from his first trip to Japan, Cage (with David Tudor and Peggy Guggenheim) stopped for a few days in Honolulu. I invited him to share his perceptions about contemporary music in Japan with graduate students at the university. He agreed readily, and overnight put together an informal, fascinating lecture. Ideas sparked, and the topic for my M.A. thesis emerged — contemporary Japanese composition in the context of its traditional heritage. Cage not only encouraged me, but also provided personal introductions to his former student Toshi Ichiyanagi, and to Toshi’s ex-wife Yoko Ono. These two composers, both fluent in English, opened many doors in Tokyo, where research would have been otherwise impossible (since I spoke no Japanese).

Through Yoko Ono’s gracious assistance I met many composers and eventually was welcomed as a member of the Fluxus group, with Nam June Paik, Shigeko Kubota, Chieko Shiomi, Tony Cox, Jeff Perkins, and others. Once again, Cage had proved an invaluable catalyst.

He waved me back, saying, “Leave it, we’ll perform Atlas with a drone tonight!”

April 1964: With amazing synchronicity, shortly after my return from Japan, Cage and Toru Takemitsu were guest composers for the annual “Festival of Music and Art of This Century,” sponsored by the University of Hawaii’s music department. Working with both men was a joy for me. Cage’s infectious good humor and patience made our rehearsals the most enjoyable part of any day.

The performance of Variations 2, 3, and 4 (simultaneously) was an exercise in controlled chaos; I actually enjoyed playing the piano part (normally a cause of much anxiety), and the audience seemed to relish the circuslike atmosphere.

For a performance of Atlas Eclipticalis by an ensemble of three timpani and nine percussionists, each player was equipped with a cafeteria tray covered with found objects. Following the score, they either dropped or scraped something on their tray. Cage asked me to assemble an inexpensive system so that contact mics from each of the 12 musicians could be mixed down to a stereo sound system. I did so, using a group of $10 mixers from Radio Shack (the best we could do with the small budget).

The players all in place, Cage walked onstage to great applause, but stepped on the main cable, breaking the shielding so that a 60-Hz hum pervaded the hall. Horrified, I jumped up, upsetting my tray, and told John I could replace the cable with an extra one very quickly. His broad smile got even broader as he waved me back to the arc of performers, saying, “Leave it, we’ll perform Atlas with a drone tonight!”

The Flux-Fest that culminated the week was a happening likely not chronicled by the composer’s biographers. Critic Babs Jackson wrote, “Cage performed an eerie piece by Takemitsu titled Blue Aurora for Toshi Ichiyanagi. Wearing a piece of green Styrofoam affixed to his forehead, he poured black water from glass to glass, put a rubber glove on his foot, and played a catchy tune with blue rayon over a chair. Lights out, he sat on a stool while flashlights played on the ceiling….”

Summer 1965: Cage asked me and my ex-wife, Kim, up to Stony Point for a day, the high point being an elegant lunch, featuring a wild-mushroom stew picked and cooked by chef Cage. In summer 1961, I had taken his course in mushroom identification at the New School for Social Research, knew his reputation as a professional mycologist, and was eagerly anticipating his dishes. Kim, however, was visibly nervous. David Tudor, a sensitive and gentle soul, noticed this and said, “I hope you don’t mind sharing leftovers, but we had this stew last night and it was incredibly delicious.” Kim relaxed, Cage just smiled broadly, and the meal was a great success.

Over the years, John Cage remained an important figure in my life. No matter where I was studying or teaching, he appeared every year or two for a concert or a lecture, and always managed to find time to catch up with me and offer counsel. Over the two decades since he left this world, his smile, like the Cheshire Cat’s, has never faded.

Fredric Lieberman is a professor of music at UC Santa Cruz. Former editor of the journal Ethnomusicology, he has published widely on Chinese music, Indian music, organology, and world percussion with coauthor Mickey Hart. He co-authored, with Leta Miller, two biographical studies of composer Lou Harrison (both published by University of Illinois Press, 1998).

Del Sol Quartet on the Edge at Cabrillo