The Joys of Musical Education

I remember the day my daughter Sofia came home from the nursery school she attended and told me that her teacher played a guitar during song time.“I want to play guitar,” she said. She was 4. I didn’t listen.

During the next two years, Sofia regularly asked her mother and me for a guitar. Finally, when she was 6, her grandmother gave her a guitar that Christmas. It wasn’t really a musical instrument, but it was made of wood, had strings, and sounded like a guitar.

Amid the excitement of newly opened gifts and mountains of discarded wrapping paper, Sofia announced, “Now I need lessons to learn how to play this guitar. When can I start?”

Flash forward nearly 13 years from that Christmas morning: Sofia began studying classical guitar at one of the nation’s leading undergraduate guitar programs this fall. Music — more specifically, guitar music — has been her life’s passion. She cannot remember a time when she wasn’t playing music.

So much of life, like my daughter’s musical journey and how it began, seems accidental. This is a story of what I learned about introducing the study of music to a young person. It’s a personal story, and possibly not conventional. 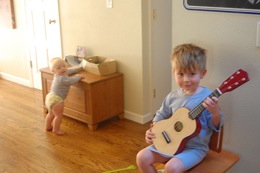 Sofia’s mother and I never set out to “make” a musician. We are not musicians. There were no merry bands of minstrels traipsing through our lives. True, we both loved going to hear live music, and there was a constant soundtrack playing in our home that featured many different kinds of music.

Sofia herself always enjoyed listening to music and was unusually fascinated by the CDs strewn around the stereo. By the age of 3 she would open the CDs, engrossed by the pictures, and ask about the artists’ names. I’d play the CD for her and talk about the music. Over time, I would put on a CD and ask her who it was.

“That’s Bob,” she would say, recognizing Bob Dylan’s distinctive voice. She heard feedback and the bluesy licks of Hendrix’ guitar and announced to no one in particular, “I love Jimi so much.”

Then there was the genre game. I’d play something and ask her what kind of music it was. She was soon able to identify most genres after a few bars. I remember once, shortly after her younger sister was born, while Vivaldi’s Four Seasons was playing, when she sat down in front of the speakers and listened intently through all four concertos.

Did we think this was remarkable? Nope. We just kept listening to music together at home and in the car, enjoying it, having fun.

Find an Educator, Not Just a Music Teacher 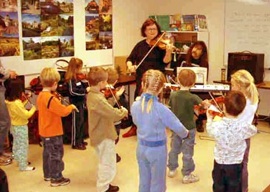 When we finally responded to Sofia’s desire to take guitar lessons, her mother discovered an elegant woman who taught classical guitar to young children, employing the Suzuki Method.

We met with the teacher one Saturday afternoon, along with several other sets of parents, and learned the basic tenets of the method — namely, that everyone can learn music the same way we learn to speak our mother language: through an environment that fosters the acquisition of the skills. This means listening to the repertoire daily on CDs, practicing daily, and taking weekly group and individual classes. It was a lot to fit into a schedule, but it made sense.

We also learned that one of us would need to become the “Suzuki Parent,” who would attend each lesson and practice daily with Sofia for 15 to 30 minutes. I signed up for that privilege, despite my lack of rhythm and tone deafness, completely unaware of the countless life-affirming experiences I would share with my daughter through the years.

It should be said that the Suzuki Method is not the only way a young child can learn music. There are dozens of methods, and parents should find out what works best for them and their children. 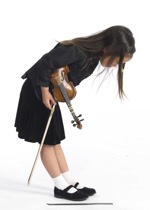 Most important for me was finding a music educator, not merely a teacher, whom my daughter responded to. There’s a difference. A music educator, in addition to having the mastery of an instrument, knows how to reach children, to inspire them, and to help them be who they are. An educator can expose young musicians to new worlds and guide them on the path to explore them.

Sofia was fortunate. We stumbled on someone with whom she connected, and who helped her learn something that she was interested in. After three years with her first teacher, we moved from Connecticut to the Bay Area. It was difficult getting connected with a new musical community. It wasn’t until I attended a recital of Beth Hilton’s studio, in Cupertino, that I knew we had found Sofia’s next teacher. Her 40 students possessed a confidence and joy in performing. Kids aged 5 to 16 related to her as if to a cool, older sister. I knew immediately that Sofia would be thrilled to play music with her.

Sofia was 10 when she changed teachers after our move, and Beth was more rigorous about technique than her previous teacher. It was the only time I ever remember Sofia being discouraged with her musical studies. She was asked to do things differently, relearn technique, and grow nails on her plucking hand that, at the time, she was habitually biting. Worse yet, she wasn’t learning new songs, which was the way she had always measured her musical accomplishments.

Beth was introducing refined techniques, which is difficult business, regardless of one’s instrument. But because she is an educator of the first order, Beth gently helped Sofia make the necessary adjustments, patiently giving room to Sofia’s frustration, always encouraging and knowing when to stop.

Keeping an Eye on the Prize

I think back to Sofia’s musical beginnings, and I’m confident that her mother and I were motivated by nurturing her overall development, rather than attempting to create a musician. It’s undeniable that a life enriched by music can bring joy to both the player and the listener. But for the young person who’s inclined, there’s a more basic benefit to studying music: It’s a wonderful way to learn how to learn. Knowing how to learn provides self-confidence throughout your lifetime, as we must consistently acquire knowledge for a rich and vibrant life.

For instance, on Monday the young musician can’t play Twinkle, Twinkle Little Star. After a lesson and daily practice of 15 minutes or more, before a week is out the child can play something that sounds like a song. With another lesson and a week more of practice, it will sound even better. This is precisely the reward that can motivate certain children. 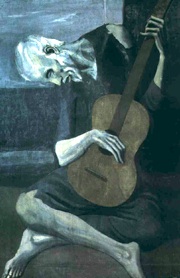 At the beginning of Sofia’s musical education, we had one rule: She needed to touch her guitar every day. After dinner we would go to the living room where her guitar was always left out on a stand, the better to encourage a drive-by noodling session during the day. We would then practice together. At first, I too had a guitar (even though I didn’t know how to play). Because I had sat in at her lesson, I was able to show her what her teacher was asking her to do, if she forgot or ran into problems.

After about eight months, this method stopped working because I was actually holding her up. Despite my practicing after everyone went to bed, my daughter was developing chops quicker than I could ever hope to.

On those evenings when she wasn’t so interested in playing guitar, I resorted to bribery. It is amazing how the promise of a few M&Ms can motivate some children in homes where sweets are still a treat. I would sit across from her and dole out two or three M&Ms after she played a passage she was working on. I was surprised to find that, gradually, she was practicing with me for longer and longer periods — even without the treats. Something was happening, and it was a delight to watch.

Eventually, the group classes ended up being bona fide guitar play-dates with kids she looked forward to being with and making music with.

Today, I can get misty-eyed whenever I hear Sofia play, remembering how she started her musical odyssey, what she learned from the wonderful people she has met, and the delights she brings to herself — and others — when she plays. It is remarkable what happens when you finally listen to your children, find the best people to help them fulfill their musical dreams, and support them on their quest.

A Family Affair:Katona Twins With Nomura