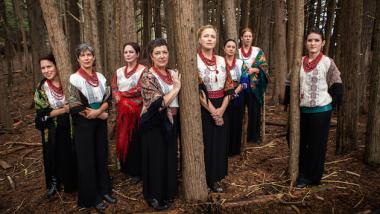 Ten women arrange themselves, forming a loose circle in a rehearsal room. Dressed casually in muted grays and browns, an occasional purple or gold accent interrupts their heather-toned palette. They fold their bodies in familiar yoga poses, yawn, massage their cheeks, and smile appreciatively at the limber woman leading the warmup. There’s nothing remarkable about them; there’s nothing spectacular about their movements, attire, or interactions.

But then, beginning a game that has them passing a sound counterclockwise while clicking their fingers to create a consistent beat, it’s as if the molecules in the air around them pivot. There’s an instant, urgent energy to the room. Before long, sound circles in both directions simultaneously — the stereo impact creates its own rhythm and the snapping beat disappears. Loose lips filter breath like a horse exhaling after a hard race; “hmm’s” and “yip-yip’s” overlap; high-pitched tones cascade like waterfalls into burbles; “yee-yaw” thrown from one person to the next accumulates until the women sound like a flock of birds startled by the appearance of a cat. A beehivelike buzz crescendos before the voices drop out, eventually leaving a solo singer to resolve the “song.” After a brief, silent pause, the group giggles in unison. This last sound — spontaneous laughter rooted in pleasure more than self-consciousness — is a lovely example of the versatility of the human voice.

Shuch participated in a 2012 Ground Floor project, After All, which she says informs her approach to Iron Shoes, the collaboration with Kitka. “Every workshop experience has the question: What is the nature of the push? The first Ground Floor I came in with a clear sense of what we wanted to do. It was a piece that we restaged and recomposed in two weeks. This time, we had questions: What is the world that we’re creating? How do text, movement, and music live together?”

Kitka Executive Artistic Director Shira Cion says the opportunity to take scores that rise from clear classical and folk-music traditions and subject them to a new environment is a way to move their art form forward continuously. “Aural traditions thrive on experimentation, but remain accessible because audiences can hear the echo of their own voices in the music.”

Iron Shoes is billed in a press release as “a neo-feminist, futuristic folk opera.” Cion says the idea began with three fairy tales. “It started in Janet’s imagination in 2013 as a mashup of songs she’d written based on the tales. Each song is a monument or a place on a geographic journey.”

Two of the fairy tales are from Russia, one from Romania. They tell stories about family — a father with three daughters, two who are greedy for fancy scarves and one who asks only for a feather from a falcon. Another tale follows a girl who is cursed and marries a pig who is actually a prince under a spell. The third story is about an armless maiden. “Her arms are cut off by her husband because her sister-in-law spreads rumors that are untrue about her,” says Cion. “She has her baby tied to her chest, comes upon a well to get water, leans forward, and the baby falls into the well.”  Of course, an old man appears and appeals to her to trust him and lean forward again. When she does, a pair of arms magically appear and ... before Cion finishes the tale, Shuch makes a visitor promise not to tell the outcome.

“We’re finding narrative structure within the songs, which were written independent of the script. They’re not dependent on the fairy tales. It’s a flirty process,” she says. “We’re giving just enough information to get context. How much does a person need to stay curious? That’s what’s guiding us.”

The text by Carter and rich lyrics from Kutulas are thick with theatrical imagery. “We knew they’d be perfect for a multidisciplinary setting,” says Cion. Shuch correlates the opera’s narrative to musical structures: the setup is an overture, the central dramatic moment of crisis forms the equivalent of a “symphonic apex,” the resolution or “moral” is a natural coda.

Themes of power in the stories arise not just from “flat” concepts like dominance, but also from improvisation: “women in grief who wail and throw themselves around,” according to Shuch. Strength and health, she says, are composed of fluidity and adaptability. “The music is like that too. It’s full of feeling: guts on the table for way too long. Living in exhausting, annoying dissonance. But if you sit in that, it’s profound. You want it to have a 1-3-5 harmony and it doesn’t. That tension is the energy; eventually, the character falls into harmony and release.” The wit of the lyrics, sung in Bulgarian, Ancient Greek, Serbian, Georgian, and English, is perhaps her favorite part.

Cion says the source music is often a text that’s twisted. “You can listen to a song with a cheery, la-la-la tune, but the text is about separation, death, poverty. Then on the flip side you can have a slow, minor key dirge with vocal ornamentation, but the text is about planting tomatoes. The mix is rooted in the idea that traditional music isn’t just music. It’s to have impact on the seasons, weather, the spirits, people. It’s a channel of communication between worlds.”

Shuch admits — and celebrates — that it’s too early to predict the outcome of the project that will find itself on a San Francisco stage as a finished work in fall 2016. “

Forms are collapsing into each other. Instead of dividing structures, we’re finding that we can more readily move from impressive classicism to feeling your internal organs to watching a movie to hearing contemporary music and then, returning to classicism. It’s time for that and we’re ready.

In the rehearsal studio, two women extend their arms, creating a window frame that when pushed open, sends them spinning in opposite directions. Another woman lunges forward, playing spoons against her thigh and issuing a melody that seems to come from deep in her torso, or maybe, from the ground underneath her heels. A cluster of women moves forward, enveloping her until she is indistinguishable from the rest. They turn to exit. We don’t know where they’re heading, but we know it’s time for them to fly, to shake off gravity, to allow their polyphonic sound to be released. And we’re ready to follow.