Losing Yourself in the Music: Confessions of a Classical Music Shopper 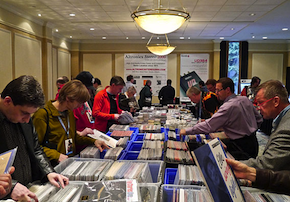 In Chapter 9 of his book In the Realm of Hungry Ghosts, published in 2010 by Berkeley’s North Atlantic Books, Dr. Gabor Maté drops a clue to his personal connection to the book’s subtitle, Close Encounters With Addiction.

It takes the form of a variation on the familiar intro to a testimony at a 12-step meeting: “Hello, my name is Gabor, and I am a compulsive classical music shopper.”

Maté’s announcement is felicitous, but serious. His professional connection to addiction developed over years as staff physician at the Portland Hotel, a residence and resource center for adult castaways in the Downtown Eastside section of Vancouver, British Columbia, known as “Canada’s poorest postal code.”

“As I was writing about my hard-core, drug-addicted clients,” Maté explained in a Skype interview from his home in a better part of Vancouver, “I was certainly able to recognize similar areas in myself and in their behaviors. Working through the emotional dynamics and being with the emptiness that addictions attempt to fill, it just helped me understand myself better.”

Colorful, shocking interactions and brief life stories about the denizens of the Portland Hotel pepper Maté’s latest book. Then he examines the roots of “behavioral addiction” in his own life, which began in the Jewish ghetto of Budapest in 1944, two months before the Nazis occupied Hungary. “I became so ill that my mother feared I might die of disease or malnutrition,” Maté writes. “In my twelfth month, she had me smuggled out to relatives who lived in hiding outside the ghetto.” This early trauma led, he believes, to his later problems. “I’ve had a lifelong resistance to receiving love. … People who cannot find or receive love need to find substitutes — and that’s where addiction comes in.”

Growing up in Hungary after the trauma of war and occupation, Maté eagerly absorbed classical music from radio broadcasts. “That wasn’t an addiction, it was just a passion, for reasons I wouldn’t have to explain to your readers,” he maintains in our interview. Music “is enlivening, enriching, and inspiring. But compulsive purchase? — that’s an addiction.”

Genesis of an Addiction 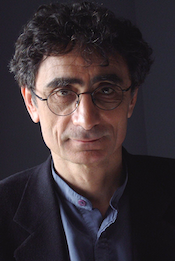 His music shopping compulsion arose much later, in Vancouver, “when I was already a physician and I was attending a self-development workshop, and the workshop organizer played Bach’s Sonatas and Partitas for Solo Violin, as sort of a background for various activities. Near the workshop was this classical music store, Sikora’s, and I went there at lunchtime with a fellow workshop attendee. Once I went in there, I immediately picked up [a recording of] the Bach. Then I started compulsively going back.” Over time, he continues, “I accumulated a large LP collection, and then CDs came in, and of course I had all the LPs replaced by CDs.”

The result was something like a discographic equivalent of the deluge experienced by Goethe’s and Dukas’ Sorcerer’s Apprentice. Maté describes what began to take over his Vancouver residence: “I don’t know how many sets of Beethoven symphonies I’ve gone through over the years, but I remember them all. I could name every Beethoven piano sonata ever recorded; I’ve owned most of them, over time. And similarly with Mahler symphonies, four complete sets of Brahms. Wagner is 14 hours for the Ring cycle, and I have five sets. Who has 70 hours and can maintain a working life at the same time?

“But I want to establish what I mean by addiction,” Maté insists, “because some of your readers will be lovers of classical music, and some will be addicts of classical music. The difference is: Addiction is any behavior, substance-related or not, associated with craving and instant pleasure and relief, where there are long-term negative consequences, and you still persist in it. You can love classical music and not be addicted to it, in the sense that you don’t have to have it right away, you’re not depending on it to give you escape from distress, you’re just enjoying it. And you’re not lying to your wife, and you’re not ignoring your children.”

Maté speaks from personal family experience, and quotes in his book a testimonial by the book’s “first editor,” his grown son David, who recalls for his dad that “The constant blare of music in our home was further evidence of your pain,” and that, “it was more important to you than the family was, than I was.”

The elder Maté was far more invested in reviews of new recordings than are most readers of SFCV. “As soon as I read about that new stack of Beethoven symphonies, better than some previous production, I immediately had to go get it,” he relates. “It’s a compulsive need for perfection. But why do people need perfection compulsively? Only because they’re lacking it internally. If [I think] my collection is incomplete, why is that? Because I’m not complete inside.” He sees reviews as “triggers,” not unlike those affecting the drug addicts he tried to help. “Somebody who is injecting cocaine or heroin, all they have to do is see a picture of a needle, and their circuits will get activated in their brain. The same with my addiction: Searching reviews was a way of titillating myself and also getting my juices flowing. I was not just seeking information, I was seeking escape.”

As with his drug-dependant clients in the Downtown Eastside, a source of Maté’s addiction lay close at hand, in the adjoining Gastown neighborhood, at Sikora’s Classical Records, “one of the greatest classical music stores in the world, with almost any version of anything ever recorded, anything worth recording.” While writing his confessional, Maté admitted that he was frequenting Sikora’s, where he’d “blown two thousand dollars on classical CDs since the New Year” and had “broken my word to stop bingeing, pledged with maximal contrition to my wife, Rae, after my thousand-dollar pre-Christmas and Boxing Day splurge.”

Maté acknowledges that his favorite music store serves many “normal” customers, but claims he can recognize fellow addicts by their “unwarranted intensity and neediness. You could have two guys in the same store buying the same set of symphonies — one addicted, the other not. It’s not the external behavior, it’s the internal relationship to it that defines the addiction. When you get your fix, do you go home and, half an hour later, feel the urge to go back again? Or can you calmly listen to what you just got, and be happy with it? For the addictive mind, you might enjoy the music, but you’re already ‘jonesing’ to acquire more. There’s never a point of rest, because addiction is not about having, it’s about wanting.”

Maté is careful to point out that, in the realm of behavioral addictions, “There’s nothing specific about classical music. Whether it’s buying tools, sexual acting out, or buying more and more electronic equipment, any target behavior can become the goal of addictive pursuits.”“I could name every Beethoven piano sonata ever recorded; I’ve owned most of them, over time.” – Maté

By the same token, “compulsive tendencies are not restricted to just one area, though there may be a dominant area, like classical music for me. But they [also] show up [for him] in relation to acquiring books, and in relation to work. Being a medical doctor, you’re rewarded for being a workaholic. You get more money, recognition, admiration, respect. But again, it’s your internal relationship to it. So in my case, when I was at home and not working, then I felt the emptiness and irritability and depression. That was the addict in withdrawal.”

By the time he’d completed the first edition of In the Realm of Hungry Ghosts, Maté was committed to altering his relationship to his addiction, and toward that end, he’d investigated the Alcoholics Anonymous approach at a local meeting. Already a favored speaker at conferences, on the basis of three previous books (one about attention deficit disorder, from which he also suffers), Maté ultimately gave up his clinical practice.

“With musicians, I find that often they’re very driven by their need to seem perfect in the eyes of others.” – Maté

Seated in front of his office computer’s camera, with his tortoise-shell tabby Lucy patrolling the premises, the good doctor, who retains a gentle trace of a Hungarian accent, seems relatively at ease. Over last month’s Christmas and Boxing Day holiday, he allowed himself a return to Sikora’s, “and it was the first time in a year and a half that I’d bought anything. I decided I was going to spend a certain amount, and I bought some lovely sets of Beethoven piano sonatas that I’m finally happy with, and I’m not going to go back. But I certainly noticed that when you’re in that environment, the triggers do start popping up, and I could see how easily I could sink back into it again. And I didn’t. I have more self-awareness now.”

It’s that sort of awareness that he promotes on speaking tours and to readers of this article. He urges troubled souls to “look inside yourselves, to see what is the emotional resonance of your seeking. When you have that craving, if you have awareness, you know, Okay, I have that craving now, and you get curious about it. Is that really just my love of the music, or is it a restlessness, an emptiness, a boredom with myself, a distress that I’m going to soothe by running to the store? And if it’s the latter, how can I be there without indulging in it? The first step, the recognition, is the important one.” The same process, he says, relates to those who feed their music hunger through Amazon, even if they have to wait longer for their “fix.”

Maté has been invited repeatedly to symposia of the Performing Arts Medicine Association (PAMA), where he addresses both physicians and musicians, drawing on his book When the Body Says No (Wiley, 2011), about the troubled cellist Jacqueline du Pré. She “had an amazingly emotive way of playing music, precisely because the only way she could express emotion was through her cello,” says Maté. “And that goes back to her childhood history. She developed multiple sclerosis, and that was a direct response to her inability to be herself. It was her body saying no, where she couldn’t say no. With musicians, I find that often they’re very driven by their need to seem perfect in the eyes of others. In this case, they’re addicted to being loved, and because they don’t love themselves, they keep needing to get it from the outside.”

Now that he himself is more aficionado than addict, Maté has enhanced access to his supersized collection of recordings, though he doesn’t expect to ever be able to listen to everything. “There’s no restlessness there now,” he asserts, “so it allows all parts of the music to penetrate.” His workaholic tendencies “still tend to dominate,” but he’ll permit himself his first-ever sabbatical, this coming summer. “That’ll be a new challenge for me,” he admits with a chuckle. “What do I do when I’m not running around, being an expert and an admired speaker? Then what am I?”