The Berkeley Symphony has never trotted out a garden-variety music education program. Even so, the orchestra’s current education director, Ming Luke, has thrashed forward in a bullish pursuit of innovation. Working with schools, from within the classroom through to the upper echelons of district administration, Luke has forged a curriculum whose ironclad efficiency makes the most of every classroom minute. 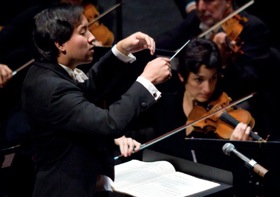 “I think there’s always a way to get as much music education impact [as possible] from a program at once,” Luke said.

With this resolve, Luke has molded the Berkeley Symphony’s award-winning Music in the Schools (MITS), which serves roughly 4,000 Berkeley Unified School District students annually. Luke’s product is a barrage of musician visits and school concerts, though this year’s syllabus is capped by a unique, community opportunity: the I’m a Performer family concert.

“All the members of the ensemble [play] music at their technical level together,” said Luke. “It’s been a tradition for the Berkeley Symphony in the schools for many years and it’s one of [our] favorite things.

“These special musicians,” he continued, “used to be elementary school students. They weren’t perfect technical performers from the beginning. They all started off in elementary school learning the instruments the same way that the Berkeley Unified students are.”

No Performer Left Behind

This year, I’m a Performer gets a new coat of paint. The Symphony has invited the entire community, musicians of every variety — young and old; amateur and professional; student and teacher — to participate in a musical happening.

“Berkeley has such a wealth of arts programs and there are so many people out there who play instruments that we made an open call to the entire community, saying, ‘Look, music is all about community, it’s all about perfecting together ... why don’t we have a concert where all are invited to participate?’” Luke explained.

The concert is open to people of all ages, instruments, and, yes, even vocal ranges. The concert will feature an excerpt from Beethoven’s Ninth Symphony and the orchestra’s all-time favorite, I Am a Fine Musician. Participants are invited to register online, where they can find downloadable scores arranged by instrument and difficulty level. The site also offers video tutorials taught by MITS mentors. The event is an hour-long rehearsal followed by the concert. Participants will get the opportunity to meet, by instrument groups, before rehearsing as a full orchestra.

“And for those who don’t play an instrument at all, we actually made lyrics that are specific to Berkeley,” said Luke. “We do our own version of [‘Ode to Joy’] so that they can sing along in the performance itself.”

The focus is really to provide students with as much encouragement about playing as possible. Whether they be adult professionals or amateurs, [whether] they be young kids who have been taking private lessons for years and are really advanced or they’re just starting out — the idea is to throw them all into the same mix, performing the same music, so they can see that discipline with instruments, sticking with it, can really help them learn any skill — whether it’s performing an instrument or anything you put your mind to.

Catherine and Christian are non-professional musicians participating in this year’s concert with their teenage son and daughter. They belong to the nonaudition adult Berkeley Community Chorus and Orchestra, which Luke also directs. The organization invites participation from performers of “wildly varying” skill levels.

“The concept of the ‘play-and-sing-it-yourself’ family concert is right in line with the BCCO philosophy,” said Catherine. “At the end of all of our concerts the chorus goes into the audience and invites them to sing along. I find that really nice: to be a part of the audience and have them participate. There’s zero pressure because there’s sound all around. No one feels that their limitations are going to be exposed.

“As of yet, we have not [done] very much,” she continued, chuckling about her preparation for the event. “We printed out the music. I’ll be working with my son learning the words. [He’s] more of a reluctant performer and may just join the audience. We’re just letting him set the pace for himself.

“We try so hard to encourage people that we know to sing and perform. And to go to an all-ages concert, to get kids to get up and perform with their parents or grandparents, I just think it’s the best thing in the world.”

“When I talk to adults,” Luke said, “and ask them how many of them, at some point, were told by a music teacher that they couldn’t sing, invariably, three-quarters or almost all, actually, lay the blame [there]. Sometimes, there’s this perception that, if you’re learning an instrument, perfection is the ultimate goal and some people are naturally more talented than others.”

“As a performer,” Catherine reflected, “I hope just to have fun. To make music with other people is a lot of fun at whatever level you do it. Whether you’re sitting around at a campfire at a scout camp or a more formal setting, it almost doesn’t matter. The process of learning something and performing for each other is inherently fun. I’m hoping as our kids grow up that they’ll have that as part of their lives. That was our motivation to participate: to encourage this type of event, going forward.”

“These musicians,” said Luke of the Berkeley Symphony, “make their living doing this because not only have they been practicing and they’re talented, but they also enjoy it. And I think that aspect of music is not necessarily glossed over, but it’s kind of forgotten. This music should be — a lot of music should be — about the enjoyment of playing. And I want to show people with this concert that, whatever level they’re at, we should have a good time playing together.”