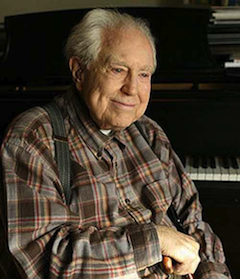 Boosey & Hawkes announced the death in New York on Monday of the iconic American composer Elliott Carter. He was just weeks away from his 104th birthday, but active and productive until his last day.

In a career that spanned over 75 years, Carter composed 158 works ranging from Symphony No. 1 (1942) and Holiday Overture (1944), to Dialogues II (2012), which premiered late last month at La Scala, Milan. His work for chamber orchestra, Instances (2012), will receive its world premiere in February 2013 by the Seattle Symphony.

Born in New York City on Dec. 11, 1908, Carter was first encouraged toward a career in classical music by his friend and mentor Charles Ives. He studied under composer Walter Piston while attending Harvard University, and later traveled to Paris, where he studied with Nadia Boulanger.

Mr. Carter is a phenomenon. To paraphrase the musical satirist Tom Lehrer, when Mozart was Mr. Carter’s age, he had been dead for 65 years.

He has lived more than three times as long as Schubert did. Some composers, like Verdi and Richard Strauss, produced until the end of long lives — but that was merely their 80s.

Lionized as one of the great American composers, Mr. Carter is respected as much, if not more, in Europe. The intellectual and performing giants of the field champion him and several top musicians in New York remain deeply loyal. Despite the thorny, complex nature of much of his music, his concerts these days are often packed, as was Carnegie on Thursday night.

Over the course of his prolific career, Carter received numerous prestigious honors, including the Pulitzer Prize on two occasions: for his String Quartet No. 2, 1960 and String Quartet No. 3, 1973. Other awards include Germany's Ernst Von Siemens Music Prize, and the Prince Pierre Foundation Music Award.

Carter was the first composer to receive the United States National Media of Arts, and was one of a handful of composers elected to the American Classical Music Hall of Fame. He was recognized twice by the Government of France: named Commander of the Ordre des Arts et des Lettres, and most recently Commander of the Legion of Honor, in September of 2012.

Carter celebrated his 100th birthday on December 11, 2008 at New York's Carnegie Hall with a new work performed by the Boston Symphony, one of the many salutes from performing organizations around the globe. The Tanglewood Festival of Contemporary Music dedicated its entire 2008 series to the music of Elliott Carter. He is survived by son David, and his grandson Alexander.

I have tremendous respect for the man, his influence, and his integrity — and for musicians I know who cherish his contributions to the literature. I have admired a number of his works, some of which have caught my breath from time to time in their performance, even if his music never really moved me.

I hadn't really heard any Carter before 1988. I was in London studying violin, and that autumn happened to contain the 80th birthdays of both Carter and Olivier Messiaen, so there were concert series devoted to both. The Arditti Quartet played all of the (then-four) string quartets in an afternoon. The First was fascinating; the Second, kind of like the Ives Second Quartet exaggerated beyond all reason.

By the Third, I was absolutely furious. It seemed to me that if you write a string quartet in which half the ensemble is over here, and the other half over there; where one half plays six movements while the other plays four; where even the Ardittis (the Ardittis!) need a click-track to get through the piece — if you do that, then you just hate string quartets, and want to tear them, almost literally, limb from limb.

The Fourth was, in a way, worse yet, because I couldn't find any point in it, not even a destructive one.

I no longer feel like that. (Except for the Fourth Quartet; I do not understand that thing any better than I did then.) And in the meantime, the intervening 20-some years, there has been much more Carter, and all of it worth hearing.

The late music — those short solo or duo or trio chamber pieces, the Cello Concerto, the Fifth Quartet, and the like — are sparer, less dense, in a way kinder than what came before. Let's not, though, go talking about the soothing quality of age, as people did about (say) Bartók. A man capable of titling an opera What Next? while in his 90s was not doing any decorous mellowing. He was practically the archetype of what we around this household call "cranky-ass music."

Friend Charlie Cockey, once and future San Franciscan, checks in from Brno:

For me, listening to Elliott Carter often takes a sort of sort of acclimatization, a shifting of sensibilities to accommodate a new way of listening to music written with a new kind of thinking, but always it was music with fierce intelligence and, however strange it may have been, musical logic. Often at first listen I would hear just noise; but then, suddenly came a moment when something shifted, clicked, and the noise became music, and what had seemed near cacophony made a sort of innate and intensely musical sense. I remember a Sunday afternoon, at Old First Church, celebrating Carter's 85th birthday: a beautiful sunny day outside, that click just wasn't happening for me, and I was thinking "what am I doing here listening to this noise?"

Of course I stayed, in due time the click occurred, and it all became music: scintillating and quite wonderful. Raymond Kobler played one of the world premieres on the program, a piece for solo violin. It was instantly music, recognizable as such, surprisingly accessible and accessibly surprising, quite winning, dare I say lovely? A healthy round of applause, then Kobler raised his hands, violin and bow aloft, quieted the audience and said: "You know, that's a piece I've only been playing a few weeks now, and none of you have ever heard before. It's a piece I really love and it's only six minutes long. If you don't mind, I'd like to play it again." We didn't, he did, and we listened.

With the first hearing like a memory echo, the landscape of the music, its length, its contours, its odd but rational sounds, made total sense. Both architecturally and musically this second encounter with the piece was profoundly more satisfying and infinitely more illuminating. One has to wonder what it might have been like had he played it a third time. As harpsichordist Phebe Craig once said to me of playing repeats in suites by Louis Couperin, "the third time is always the best." I loved those rare occasions being in Carter's presence, his eyes a-twinkle, his wonderful smile always at the ready; and yes, I really love his music.

Martin Bernheimer commented on the news:

Styles changed, trends evolved, clichés came and went. So-called modern music progressed and regressed. And for decades on end, Elliott Carter remained his own man, marching to no one else’s drum. He was brilliant, stubborn, tough, inventive, inspiring, crusty, difficult and, yes, unique. A long and wondrous era has ended.