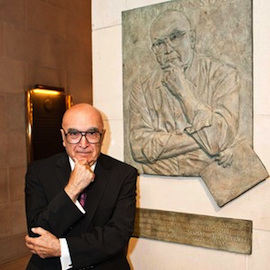 Lotfi Mansouri, the stage director and company executive with a varied and significant role in contemporary opera, died Friday after a long bout with cancer. He was 84.

San Francisco General Director David Gockley announced the news to the company from the War Memorial Opera House stage during a rehearsal for the season-opening Mefistofele (whose previous staging of this production was under Mansouri's directorship).
Gockley also issued a statement, saying:

I had the pleasure and honor to know Lotfi for 48 years, as teacher, director, colleague and friend. His larger-than-life personality, broad sense of humor and boundless enthusiasm for his work endeared him to everyone. His knowledge of the repertoire and stagecraft were daunting, and it benefitted every organization he was associated with. While he adored Midge and Shireen in his immediate family, Lotfi was a nurturing father to his many "operatic children" around the world. All of us will miss him dearly.

As he recalled in his memoirs, according to family lore, Mansouri's life almost ended before it began: Appearing to be stillborn and given up for dead on a sweltering day in Iran in 1929, the baby was placed on a block of ice, and there revived miraculously; he was named Lotfollah — "kindness of God."

From the "dusty streets of Teheran," where he first encountered opera — at the movies, where he heard Deanna Durbin sing "Nessun dorma" — Mansouri made his way to Los Angeles to study at UCLA. 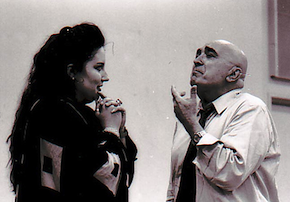 But before then, as he recalled in his book Lotfi Mansouri: an Operatic Journey, he made his stage debut in kindergarten, playing the Grand Vizier in a cast with Princess Fatemeh Pahlavi, the future Shah's half sister. "Unfortunately, the crown prince himself attended our little performance ... and I got so nervous that I wet my pants and started crying onstage. From that moment, I developed a lifelong sympathy for singers' nerves."

Mansouri graduated in 1953 with a degree in psychology, and his classmates at UCLA included Arnold Schoenberg's daughter. He had lunch with Alma Mahler, the composer's widow ("I had no idea who she was"), started the friendship of a lifetime with Carol Burnett, and made his debut with the San Francisco Opera.

He was a super in Otello during one of the company's many visits to the Shrine Auditorium. Later, he worked as an usher, and — a few years and many globe-circling adventures later — became the San Francisco company's fourth general director. 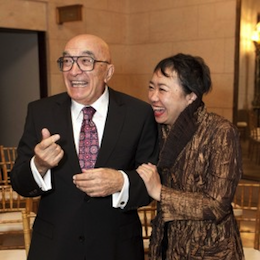 That year, during the Loma Prieta earthquake, he dove under the desk in his office — a desk "with a marble top," he recalled later of those fateful 15 seconds. Performances soon resumed, but eventually the War Memorial had to be rebuilt and made earthquake-safe.

Raising the needed $90 million (when that was "real money") was just the beginning of Mansouri's saga of the survival, or better yet, the flourishing of the only major opera company ever to conduct regular seasons without its home.

During 1996-1997, not only were a dozen S.F. Opera productions given in the Civic Auditorium, the Orpheum, and elsewhere; Mansouri's "Broadway Bohème" brought in new and younger audiences. The average age of audience in those two years dropped from 54 to 31 — an amazing accomplishment. He was also responsible for commissioning new operas, including works by John Adams and Jake Heggie.

Mansouri, who earlier served as resident stage director for several companies, and ran opera houses in Geneva and Toronto, made his mark in the history of opera at the latter: At the Canadian Opera Company, he introduced and then championed, even against heated opposition by traditionalists, the now-familiar Supertitles, the simultaneous translation of operas, largely responsible for creating new audiences especially in this country, and now spread around the world.

He had worked with the past half-century’s best-known singers, conductors, and administrators everywhere, visiting his native Iran, and being feted there, even after the Islamic revolution.

Early in his career, he acted and sang in a made-for-TV movie, The Day I Met Caruso, playing Caruso himself. His Hollywood career continued many years later when he was involved in the Pavarotti movie disaster Yes, Giorgio, which, according to Mansouri, cost $19 million to make and grossed $1 million. He went on to direct the memorable opera scenes in the far more successful Moonstruck, with Cher and Nicolas Cage.

Services are pending. In lieu of flowers, the Mansouri family requests that donations be made to San Francisco’s Merola Opera Program at www.merola.org and/or to Canadian Opera Company’s COC Ensemble Studio at www.coc.ca.

Starting Saturday, the War Memorial flag on the Opera House is lowered to half-mast in honor of Lotfi.