Janos Gereben on July 27, 2009
Ten years ago, when Michael Steinberg retired as the San Francisco Symphony's program annotator and music advisor, he had a farewell essay in the 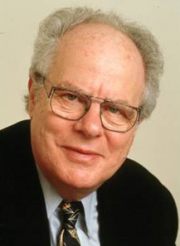 program, entitled "Why We Are Here." It is also part of the book For the Love of Music Steinberg cowrote with Larry Rothe, his long-time colleague at SFS.

Steinberg, who died Sunday at age 80, wrote memorably in that essay about music and talking about music, exercising his lifelong vocation and art:

Tristan und Isolde, the very symbol for all that is recklessly emotional in music, depends for its effect on presenting a dissonance 15 seconds into the piece and refusing to melt it into consonance until 15 seconds from the end — something like five hours later. All that fever from an unresolved dominant seventh!

I know that such talk can scare people and annoy them. But it's the talk that does it, the words — "dominant seventh," or even worse, "unresolved dominant seventh," "flat submediant," "Neapolitan sixth" — not the music itself.

The words are useful: precise terms make conversation efficient and agreeable. Imagine the nuisance of not being able to say "bunt" or "béchamel" or "backhand"!

The term "flat submediant" may alarm you. But I know your heart is pierced when, in Elgar's Enigma Variations, the strings sneak an E-flat under that delicate bridge of a suspended G to begin that noble paean to friendship, the Nimrod Variations ...

In all his writing — urbane, sophisticated, encyclopedic, and always clear and illuminating — Steinberg elegantly bridged the daunting gap between academic knowledge and visceral experience of music, always aware of the importance of both, and — for the vast majority of listeners — the primacy of the latter.

I regret how little time I had a chance to spend with Steinberg, my music writer idol — when running into him at Davies Symphony Hall, in Aspen, at [email protected], at Music at Kohl Mansion, dozens of other places — but I am lucky to have had some four decades of reading his works.

At concert after concert, Steinberg's program notes informed, educated, and delighted me. I am not proud of this, but in truth there have been numerous times when the music couldn't hold me, so I turned back to the program notes for entertainment, to make better use of my time. Steinberg's "performance" was invariably flawless.

Rothe, who has worked with Steinberg longer and closer than anyone else, said this on Sunday, learning of Steinberg's death:

In his writing and in his talks, Michael knocked down walls with intelligence, wit, and a broad sense of culture. He was a great storyteller. He expected much from his readers and offered much. You get a taste of all this in his books: The Symphony, The Concerto, and Choral Masterworks — three compilations of his program notes.

In the way he lived, Michael mirrored music at its best. He was affirmative and honest and uncompromising, elegant, and ornery. He spoke in beautifully paced full sentences and paragraphs. He wrote with the eloquence and generosity and fierceness he believed the music demanded.

He knew that what happens between music and listener is a kind of love, and that music, as he said, "like any worthwhile partner in love, is demanding, sometimes exasperatingly, exhaustingly demanding ... [but] that its capacity to give is as near to infinite as anything in this world, and that what it offers us is always and inescapably in exact proportion to what we ourselves give."

SFCV colleague Jeff Dunn speaks for many of us:

In my book, he was the greatest program notes writer ever. Thoughtful, provocative, and well-crafted sums it up. Although his death is a great loss, his pieces nevertheless remain a resource that could help some current writers in his field if they gave him some study.

Michael Steinberg was the eloquent voice of the art — an exemplar of the profession, profound in curiosity, keen in judgment, and complete in integrity. His deep knowledge and percipience were combined with his fire, transmitting his love for music to his audience, inspiring and engaging each reader and each listener as an eager participant.

Pulitzer Prize-winning critic (for the The Financial Times and Opera magazine) Martin Bernheimer also writes essays for program magazines; he says of Steinberg: "Michael was a brilliant scholar, a discerning musician and a good colleague." 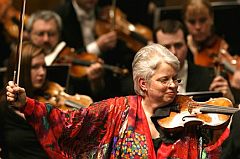 Music at Kohl Executive Director Patricia Kristof Moy, who has welcomed both Steinberg and his wife Jorja Fleezanis many times at concerts in the Mansion, remembers him as one who "illuminated music for all — from the uninitiated to the cognoscenti. A gentle, classy, generous colleague."

Here is just one example among literally thousands of possibilities to show Steinberg's unique work. There is relatively little known and not much to be said about Schubert's Rosamunde Overture, but when Steinberg wrote the program notes, there were no stones left unturned, no spade called anything but ("hack author," "valueless," "vapid" — this is from the days before Marketing provided polite notes and honed words of boosterism in lieu of the real stuff):

That we list this piece as the Overture to Rosamunde is a concession to custom. It has nothing to do with the romantic play by Helmine von Chezy with incidental music by Schubert that was performed twice at the Theater an der Wien in December 1823.

The play is lost, though Schubert’s delightful music survives—entr’actes, ballets, a romance for contralto, and some choruses. Those nine pieces were new, but for the overture Schubert raided his unperformed opera of 1821-22, Alfons und Estrella. The piece we hear at these concerts was written as one of fourteen musical numbers for a play called Die Zauberharfe (The Magic Harp) by Georg von Hofmann, a theater official and hack author.

The muddle about the title is to be laid at the door of the Viennese publisher Maximilian Josef Leidesdorf, who about 1827 published this overture in arrangement for piano duet and for reasons history does not reveal chose to call it Ouvertüre zum Drama Rosamunde. Not only do we not know why he did so, we cannot imagine why he might have wanted to. Rosamunde had been a decisive failure, and its title cannot have meant much to prospective purchasers of piano duets.

Not that Die Zauberharfe had fared much better, though it had enjoyed a run of eight performances in the late summer and early fall of 1820. Critics attacked the play for its insipidity — Schubert’s first major biographer, Kreissle von Hellborn, calls it "utterly valueless, nay, utterly childish" — though Schubert got his knocks, too.

The anonymous critic of the Allgemeine musikalische Zeitung conceded "glimpses of talent here and there" but complained of the numbers being generally "too long and wearisome, the harmonic progressions too harsh, the instrumentation overladen, the choruses vapid."

Two movements came in for praise, the slow introduction to the Overture and the tenor romance "Was belebt die schöne Welt?" Of these, the critic said, "The expression is lovely, the simplicity noble, and the modulation delicate."

In part reworking material from his D major Overture In the Italian Style, D.590, composed in 1817 and probably the first work of Schubert’s to get a public performance, the composer made an impressive opening, a charming allegro, and a bright conclusion.