In Memoriam: Milly Rosner 'Teacher to the End'

When I was sitting by Milly's side 10 days ago, she said she wanted to hear one of her students play the Sarabande from the Fifth Bach Suite. When I showed her a video of Yo-Yo Ma playing the piece, she yelled at the screen: "No! It's a simple line that must be played simply!"

She then sang how it was supposed to go. The last moment of complete lucidity I witnessed from her. A teacher to the end.

This is how James David Jacobs remembers music teacher Mildred Celia Rosner, who died Saturday in Berkeley, just a month short of her 86th birthday. 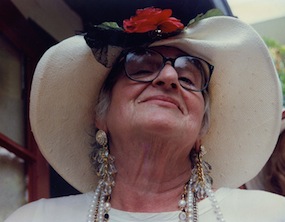 Cellist Jacobs, host and producer for WGBH Classical New England, was Rosner's student in Berkeley, and became her foster son at age 13.

"Milly saved my life," Jacobs says. "One day whe the lesson was over, she fixed me a sandwich, which was normal practice for her; she fed all her students. She taught a punishing schedule, seven days a week, 10-12 hours a day, but she would allow 90 minutes for each student, which would create time for food and talk.

"When I told her I was about to become a ward of the court, she told me I can always stay with her 'for a few weeks,' which became three years, and a lifelong relationship."

Rosner was born in Chicago, her Jewish parents came from Hungary and Russia. She attended Yale School of Music, and after years of teaching on the East Coast, she came to Berkeley in 1970, working as an independent teacher, including a three-year association with San Francisco State University, and for the longest period, Crowden School of Music.

She taught there since 1984, a year after Anne Crowden had opened the school, where Rosner is remembered as "teacher, grand mentor, passionate champion of Crowden, who loved her students, friends and teaching."

Her cousin, Pearl Rozner Lipner (who spells the name differently), was with her on Saturday when she died, after a long illness. Lipner sent this message to Crowden:

All she ever wanted to be was a good teacher — and we all know she achieved that, and more. I read her a letter from one of her first students who explained that he had just been to a recital of the students of one of his students. That made him the grandfather teacher, and Milly the great-grandmother teacher. Since she considered all of her students her "kids," this is certainly a perfect way to remember her, as the wonderful, giving, loving, laughing, yelling, spectacular, great-grandmother of cello.

Rosner requested no memorial service, but Crowden is making plans for an event soon to honor her memory.

Crowden Center for Music in the Community Director Eugene Sor says he finds it difficult "to find the words to adequately describe what Milly meant to me personally or the Bay Area music community as a whole," recalling that "one expression Milly's students universally use to describe her is 'my cello mother'. Beyond being a great teacher, she encouraged, challenged, inspired, and loved her students as passionately as if they were her own children."

Robert Commanday, a long-time acquaintance, says "she was an important teacher, inheriting the role of the great Margaret Rowell," and mentions such outstanding cellists as Bonnie Hampton, Emil Miland, and Thalia Moore as her former students. Among others: Peter Shelton, Jennifer Culp, Dawn Foster-Dodson, Robin Bonnell, Michal Shein, and Lucas Chen.

Jacobs recalls Rosner's "practice modules" for her students, such as separate periods for scales and arpeggios; work on a Popper etude; playing a movement from a Bach suite, then the first movement of the Haydn C-Major Cello Concerto:

No matter if you have a competition or a big performance coming up, you still have to practice your scales. No matter if the issue du jour is your bow hold, you still have to spend some time with your left hand. And you have to keep up with your homework at school. And you have to come out to hear your fellow students perform. And you have to stay late at Milly’s house to eat ice cream and listen to Bessie Smith records and discuss James Joyce and play Scrabble and take long walks and get to the bottom of the problems facing someone in the community.

Rosner's strict discipline didn't please everyone. "She did not have much patience for those who did not share her priorities," Jacobs says. "If you surrendered and went along for the ride, you were amply rewarded, but that required a sense of discipline and confidence in one’s identity that not all of her students shared."

She was a great admirer of Pablo Casals, and was fond of a quote of his: "Intonation is a matter of conscience." Milly considered intolerance a virtue — intolerant of bad intonation, phrasing that wasn’t thought out, bowing that didn’t serve the piece.

Nothing could be phoned in. Every note had a way of playing it and a reason for being. The students that stuck with her, the ones that absorbed what she had to offer and managed to negotiate the rough moments in their interaction with her, played with real musicianship and wisdom, taking listeners with them on the journey of a given piece.