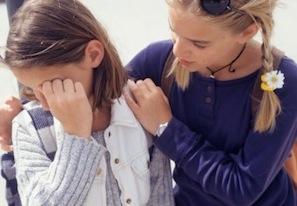 A recent study at the University of Cambridge found that children that partake in music activity in a group setting are more prone to developing one of humankind’s noblest traits: empathy.

The research, though preliminary, may have an impact on how school systems, policymakers, and music educators view music as being integral to the development of children.

The year-long study, conducted in the U.K. by Tal-Chen Rabinowitch and Ian Cross, who are both on the music faculty at Cambridge, found that children between 8 and 11 years old involved in different types of group musical activities were more likely to develop empathy than those in control groups where music was not included.

The study defined empathy as a child’s having an understanding of the emotional state of another. A total of 52 children — 28 girls and 24 boys — were split, randomly, into three groups. One met weekly and was immersed in interactive musical games and was composed of 13 girls and 10 boys. A second undertook group activities that involved the use of written texts and drama, but no music. Another group took no interactive activities at all.

The children involved in musical group interactions scored higher on an empathy test given to all the children both before and after the activities. “The relationship between music and empathy seemed to be a particularly good match,” said Rabinowitch, the lead researcher.

“Analyzing these two domains theoretically, led us to hypothesize that certain processes and underlying cognitive mechanisms should be naturally shared between musical group interaction and empathy,” Rabinowitch said.

The music activity stressed what Rabinowitch called “entrainment,” wherein players must become rhythmically attuned to one another during the course of the musical activity. Imitation and the sharing of musical goals were also stressed in the activities. Imitation games demanded that one child do something musically, with the next child imitating it, and the next imitating the imitation. These happened in mostly unstructured, improvisational situations. Each child playing a musical instrument had to attend to other children in the group.

Rabinowitch said she was curious to establish whether strengthening or refining those activities in a group context would also focus and strengthen them in an everyday context.

“Empathy is considered to be a precursor of prosocial behavior, a crucial ingredient in our daily social lives, said Rabinowitch. “Empathy keeps us ‘together,’ connected, and aware for each other.”

To establish whether the children developed empathy, the researchers gave them a 22-question test called the Bryant’s Index of Empathy for Children and Adolescents. The test asked hypothetical questions such as “If you saw a friend had fallen over, would you go over and help them up, soothe them, or laugh?” A nonverbal test of matching faces and a memory task game were also part of the testing.

“Empathy is … a precursor of prosocial behavior, a crucial ingredient in our daily social lives.” – Tal-Chen Rabinowitch, researcher

“Overall, the capacity for empathy in children that participated in our musical group interaction program significantly increased, an effect we didn’t observe in the children from control groups, which included children who participated in equivalent sessions of games and special tasks, but without any music,” said Rabinowitch.

In the nonmusical groups, the researchers used drama and storytelling in similar ways in a group activity setting. The expectation was that children who participated in the control-games groups would also show an enhanced capacity for empathy following the program.

“Such an effect was not found, but still, we’re very hesitant to draw definitive conclusions, as the sample size of this particular group was small,” said Rabinowitch. “While this is a preliminary study, replication of its findings with larger groups in different cultural contexts would have significant implications for the value of music in education.”

Some involved with arts education find the study intriguing for how it points to the deeper effect that involvement in the arts has on young students.

“In the intense focus on academic performance and test scores, we can lose sight of the social and emotional dimensions of learning and child development,” said Joe Landon, executive director of the California Alliance for Arts Education.

“In fact, the two are related,” he continued. “Quality arts programs have the potential to empower and engage students in ways that can promote learning across the board. Students who have a positive sense of themselves are more likely to embrace learning new things and find success in school.”

The research underscores that music can be a vital communicative medium that helps children manage social situations, said Cross.

“In many traditional cultures music is something people do together — they do not consume it, they do it and use it,” Cross said. “And often they do so in situations of social uncertainty. That gave me the idea of thinking about music as optimal for managing those situations.”

“In the intense focus on academic performance and test scores, we can lose sight of the social and emotional dimensions of learning and child development.” – Joe Landon, California Alliance for Arts Education

In an age when many children experience music alone on iPods and computers, especially students at the upper elementary level, the research underscores the value of face-to-face musical interactions.

“The Rabinowitch work helps reinforce the intuitive notion that engagement in music is beneficial in terms of ethos, pathos, and logos,” said Jonathan Berger, codirector of Stanford University’s Institute for Creativity and the Arts. “The important notion here is that, in this age of ‘removed listening,’ in which the vast majority of engagement with music is done through earbuds and on the run, the importance of true engagement is critical.”

Berger cautioned that the research does not categorically show that collective music-making does a better job at promoting empathy than does involvement in other kinds of group activities, like team sports. “It’s possible that the intense collaborative and group activity is as important as the actual product,” he said.

In the realm of psychology, the research holds a certain interest for Ross Thompson, professor of psychology at UC Davis. “It’s a well-designed investigation,” Thompson noted. “The results are not strong, as the authors recognize, but they lend support to the idea that attentiveness to another’s feelings and goals … can generalize to other situations involving sensitivity to another’s feelings.”

Thompson believes the research raises interesting questions, given that much of musical instruction nowadays is geared to individual performance — such as a piano recital — rather than for improvisational group performance. “The characteristics of empathy-promoting musical components may not be common in the typical experience of young children learning a musical instrument,” said Thompson.

“In many traditional cultures music is something people do together — they do not consume it, they do it and use it.” – Ian Cross, researcher

The research dovetails with other studies that have found links between group music-making and the development of certain traits in children. One of those studies was conducted by Lisa Huisman Koops, assistant professor of music education at Case Western Reserve University. Koops has studied the effects of musical play in group settings among 4- to 6-year-olds, both in the U.S. and in the African country of Gambia.

In Gambia, Koops found that children teach themselves music in a self-directed way by listening, observing, and participating in musical activities. She contends that American children show similar learning patterns when they are involved with music in a playground setting. In both, there is a sense of empowerment that develops.

“The Rabinowitch research is an exciting line of inquiry that resonates with my current work on the intersection of joy and agency in children’s music-making and musical play in group settings,” she said. But Koops was willing to go a step a further. “It seems to also have implications with autism,” she said. “Empathy is an area, I believe, that is often highlighted when working with autistic children.”

Ultimately, the research can only be seen as preliminary because of the study’s small size, and must be tempered by the issue of confirmation bias — that is, researchers’ favoring information that confirms a hypothesis.

“I’m sure that, as in many other studies, confirmation bias plays a role,” said Rabinowitch. “In order to attenuate this bias, we designed the study as a controlled experiment, with different control groups, but nevertheless, the danger still exists.”

Any subsequent study would seek to reduce the impact that the person administrating all the group interactions would have on the children. That study, if and when it happens, will be done on a much larger scale, she said.