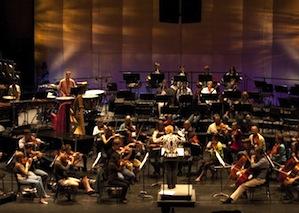 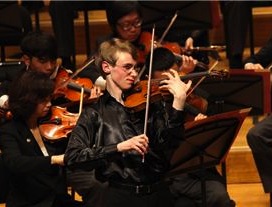 The violin competition founded by San Francisco prodigy Yehudi Menuhin (1916–1999), and named for him, has become one of the most important music contests.

Last weekend, close to the 90th anniversary of then 7-year-old Menuhin making his San Francisco Symphony debut, San Francisco Conservatory of Music students won top prizes at the Menuhin Competition in Beijing, where 42 competitors were selected from over 230 entries. 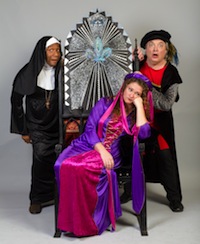 Instead of the umpteenth Barber of Seville, consider another hilarious and melodic Rossini comic opera you have never heard — or perhaps even heard of. Pocket Opera's production of the 1828 Count Ory, with two more performances remaining, is a gem, in Donald Pippin's English setting, and loving presentation.

Pippin's usual droll and illuminating introduction paints a word picture of what you should see in the Marines Memorial Theater: "A castle on the left, a hovel on the right, and the Crusades are in full bloom ... off stage." Yes, the flower of manhood is off "to set the Middle East right," leaving the women behind, and at the mercy of the dastardly Count Ory.

What Pippin describes as Rossini's "deftest, wittiest style ... a delicious game ... innumerable delights in an inexhaustible score ... melodies that flow like champagne" develops into Ory and his rowdy companions invading the castle disguised as nuns. Sings Ory, in Pippin's setting of the libretto: "I’m not done for. The girl I gun for, become a nun for, will pay the price ..."

On top of it all, the exquisite trio near the end of the opera is — honestly! — taking place in total darkness. "After everyone is in bed, Ory enters Countess Adèle's room. He woos her, not realizing in the dark that it is Isolier's hand he is holding. The men return from the Crusade. Isolier reveals himself and ..." Don't bring flashlights, the lights are on in Pippin's version of this author-defying Regieoper or PocketTrash production.

Pocket Philharmonic does well, after a rocky start (they really need an off-stage warmup), and the principals are excellent, especially Jennifer Ashworth's Adele, Jennifer Panara's Isolier, and Michael Mendelsohn's Raimbaud (Pippin emphasizes the empasis is on the second syllable here). Darron Flagg in the title role has a fine comic turn and sings very well, except for yodeling high notes; those must be brought under control. 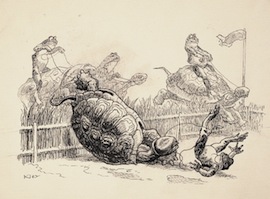 As promised in the current review of Yuja Wang's Fantasia, here is the scoop about the long-awaited return of the Disney film, which inspired it.

That seminal film for a generation of future music fans was last seen in commercial release more than 40 years ago; locally, there was a three-day special screening in the Castro Theater last year. Although the 60th anniversary (2011) DVD is available, unless you have a wall-sized flat-panel monitor, a theater is the place to go.

San Francisco's Walt Disney Family Museum, which will screen Fantasia, is doing so in the context of a fascinating exhibit, Heinrich Kley: From Fantasy to Fantasia. Kley was a European illustrator much admired by Disney, and this exhibit of his drawings will be a U.S. public debut. Also on view are four of Kley’s sketchbooks, containing some 50 pages of intricate drawings. 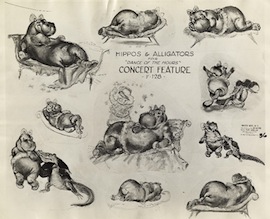 Disney returned from a 1935 trip to Europe with some 350 illustrated books and artworks that he acquired with the intention of using as a source of inspiration for future projects. He responded to the "beauty, drama, and powerful visual narrative and irony" of Kley’s work. In a 1964 television interview Disney said, "Without the wonderful drawings of Heinrich Kley, I could not conduct my art school classes for my animators."

Fantasia’s Night on Bald Mountain scene, for example, where the devil Chernabog summons evil spirits and restless souls from their graves, is deeply influenced by Kley’s 1920 Jugend Titelblatt (Title Page of Youth), where two demons lord over a mechanical factory, turning it into their own industrial playground.

Kley has drawn animals dancing, mice playing fiddles to an audience of snails, and rabbits boxing — influencing directly Fantasia’s Dance of the Hours, with Ponchielli's music in the background of dancing crocodiles, elephants, alligators, and the unforgettable hippo ballerinas.

The Kley exhibit is running May 11 through September 17; the film will screen in the museum's small but terrific theater daily except Tuesdays through the month of August, at 1 p.m. and 4 p.m. 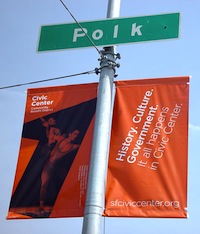 From the San Francisco Opera's squashed logo of yesteryear to the Asian Art Museum's recent logo update (by creators of the headache-inducing 2012 London Olympics emblem), expensive branding or, worse, "rebranding" has rarely done anything positive for anybody except those doing the job. Entering the fray today: the city of San Francisco, creating costly and silly signage for the "Civic Center Community Benefits District."

New signage has gone up in Civic Center Plaza that at first glance looks like it's announcing some weird collaboration between the San Francisco Giants and the San Francisco Ballet, but on closer inspection turns out to be announcing the arrival of the Civic Center Community Benefits District. According to their elaborate looking website, what looks like the numeral "1" is actually the new entity's shape on a map, with Market Street as the slanted boundary at the top.

Community Benefits Districts are formed by the additional taxation of local businesses and property owners in a San Francisco neighborhood. Even with a $7 billion budget, the City and County of San Francisco somehow can't provide such public amenities as basic beat policing, help for tourists, and graffiti removal. Last week I ran into my first "community ambassador" above, and after it was established that I actually live in the mini-district, he asked if there was anything he could do for me.

Read on at the Civic Center blog.
Back to top

Puts also had works performed at the Cabrillo Festival (see next item), and on one of rotating collaborative commissions among the Marin-Oakland-Santa Rosa orchestras. Cypress String Quartet recently featured Puts' Lento assai.

Cabrillo, at 50, Is Younger Than Springtime

Music Director Marin Alsop announced today the Cabrillo Festival of Contemporary Music's 2012 season. The season protuberates with novelties, true to the name and mission of the 50-year-old organization.

"Fearless at 50" is the slogan for the season, which includes six world premieres, three West Coast premieres, 14 composers in residence, an historic commission by Scottish composer James MacMillan and a multimedia collaboration with the Kitchen Sisters, "Hidden World of Girls: Stories for Orchestra."

Running from July 28 through August 12, the season includes these premieres:

Schumann and San Francisco Performances: the Next Season

Ruth Felt, San Francisco Performances president, announced today that the 2012-2013 season will feature a series curated by pianist Jonathan Biss on the life and influence of Robert Schumann; a virtuosi violin series with Hilary Hahn, Anne-Sophie Mutter, and Midori; a celebration of composer Philip Glass on his 75th birthday, and the West Coast premieres of several new works by Paul Taylor with the return of his dance company to the city.

Biss will give four concerts in a project called Schumann Under the Influence, also engaged by Wigmore Hall in London, the Concertgebouw in Amsterdam, and Carnegie Hall. The series includes the commission of a new piano quintet from the young American composer Timothy Andres for Biss and the Elias Quartet in its San Francisco debut.

The season includes the return of pianist Jean-Yves Thibaudet, baritone Thomas Hampson, and a co-presentation with the San Francisco Symphony of four Bach recitals with pianist András Schiff. New artist to SFP include pianists Martin Helmchen and Till Fellner, and violinist Vilde Frang. Kate Royal with pianist Malcolm Martineau returns Nov. 10 to perform the program from a canceled concert two seasons ago, The Truth About Love.

In chamber music, the Takács Quartet performs twice, and on Saturday mornings the Alexander String Quartet and Robert Greenberg introduce a theme of Benjamin Britten and his contemporaries in the time of war. In dance, The Bad Plus brings the West Coast premiere of their own Rite of Spring, and British choreographer Russell Maliphant's company makes its local debut.

The work about the lives and creations of this pivotal trio of 19th-century German Romanticism will be presented in the Conservatory Concert Hall on May 6 and 7, but — here comes bad news — all tickets were gone before the announcement was made. On the other hand, the script for the work, which is still under development, will be published, and there have been inquiries from opera companies interested in producing the work.

Kathryn Cathcart, former Opera Theater music director, did the research and worked with Harrell and Mansouri to shape a script, which follows the style of the 19th century Salon Musicale. That tradition developed as as musicians and aficionados gathered in private homes for informal performances of chamber music. As Harrell describes it, "Four singers and two pianists enter the stage and begin a conversation with hostess Frederica von Stade about the closely intertwined relationships of these musicians. As they do, music brings their stories to life." 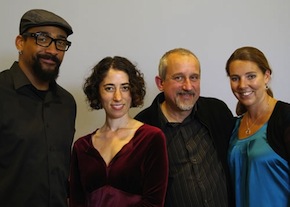 Five-time Grammy nominee Quartet San Francisco will perform a benefit concert at Yoshi's Oakland on May 7 in support of educational programs and student scholarships at the Crowden Music Center.

Known for its pioneering music day school, the first of its kind in the nation, Crowden combines music education with a warm, neighborly atmosphere. In addition to offering a broad range of lessons, classes, and ensembles for all ages, Crowden provides outreach programs in local public schools, and a variety of free concerts and events for families. About half of Crowden's student body receives financial aid.

Quartet San Francisco's commitment to Crowden originates with violinist Jeremy Cohen's dedication to the memory and lessons of his main teacher, Anne Crowden, who founded the School 1983. The quartet has performed at and in benefit of the Center, and Cohen frequently visits the school to coach students.

Crowden students will join Quartet San Francisco onstage for portions of the benefit concert, which will feature original arrangements of some of the Quartet's decidedly non-classical music. Tickets are available from Crowden and Yoshi's.

The Peninsula Women’s Chorus will present the premiere of Ripple, a work commissioned from Ted Hearne for the group's 45th anniversary season, on May 12 and 20. In the eight-part choral piece, Hearne uses just one sentence from recorded internal military cables, uncovered through WikiLeaks, known as the Iraq War Logs:

The marine that engaged from Post 7 was unable to determine the occupants of the vehicle due to the reflection of the sun coming off the windshield.

Set in its entirety at the beginning and end of the piece, Hearne uses this text in various excerpts in the remaining inner movements. The composer employs "intricate polyrhythms, juxtaposing soulful spiritual-like tunes with quasi-minimalistic elements that reiterate small shifting phrases. This imbues the piece with a sense of flashback and disembodied memories in an exciting tour de force for the choral medium." The announcement adds the work's "brilliant musical construction allows us as performers and audience to explore the effect of a singular trauma on the people involved in, and permanently affected by, war."