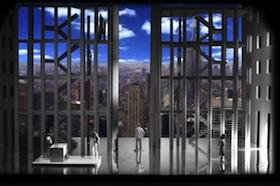 While very much appreciating Gertrude Stein’s role in promoting modern art (“The Steins Collect: Matisse, Picasso, and the Parisian Avant-Garde” is terrific; closes on Sept. 6!), I am not a fan of her writing. That, of 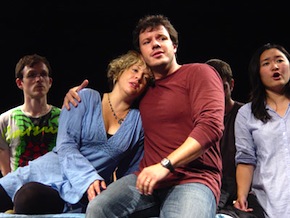 course, would be completely inconsequential, were it not for the approaching production of the Thomson/Stein Four Saints in Three Acts.

Are you counting Saints? Yes, more than four. That’s part of Stein’s jocosity. The three acts turn out to be two, sort of: “A Heavenly Act” prologue, with music by Luciano Chessa, and Thomson’s opera proper, in one act. 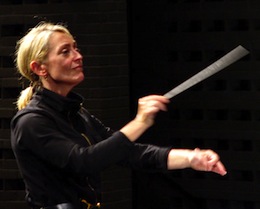 In a Fox-free effort to be fair and balanced about Ms. Stein, I turned to born-again Stein fanatic Mike Strickland, of the Civic Center blog, and a prominent supernumerary in the production. Here’s his position on the controversy (which is certain to exist beyond just the two of us):

Gertrude Stein, while making it a joke by proclaiming it so publicly and repeatedly, was a Serious Genius. She studied at Harvard as a young woman under William James, brother of Henry, and was probably James’ favorite philosophy/psychology student.

What she was attempting in her writing was to convey extremely complex thought using the simplest of language. Sometimes it works, sometimes it doesn’t, but there’s nothing phony about it. 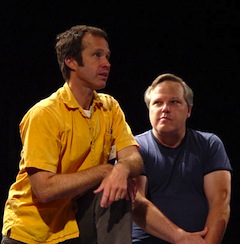 What’s most important about Four Saints in Three Acts is that it allowed Virgil Thomson to write vocal music that wasn’t dependent on narrative or emotional content and to simply play with the problem of how best to set English to music. Much of the score is successful simply as earworm music, and part of the reason for that is because the words and music do fit so well together.

Though the libretto doesn’t “mean” anything in a traditional narrative form, it has an inner meaning and an outer sound that is genuinely hypnotic and Thomson captures it. I didn’t use to think this way about the piece, based on a recording of the full opera on Nonesuch and the Mark Morris ballet version which both bored the hell out of me.

What’s changed is this: hearing the Thomson recording from the early 1960s recently for the first time with his all-black cast really swinging; reading Gertrude Stein for the last four months in her series of autobiographies; and hearing Ensemble Parallèle conductor Nicole Paiement creating wonders with the music during rehearsals.

And then this unexpected sentence from Strickland, otherwise known as “one tough guy” — “I keep bursting into tears during the rehearsals at the beauty of the score and the singing.”
Back to top

The Old Testament prophet who opposed the worship of idols, rebuked Ahab and Jezebel, and was taken up to heaven in a chariot of fire later became the subject of a grand oratorio by Mendelssohn. The 1846 work is being performed by the San Francisco Choral Society in Davies Hall, Aug. 26-27. 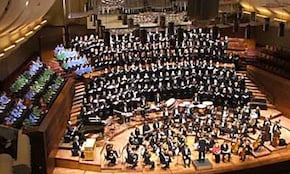 Although the composer is known for his romantic music and Elijah has many lyrical passages, it reflects the Baroque spirit of Handel and Bach, the master whose music was revived in a large part through Mendelssohn’s advocacy.

Episodes include the resurrection of a dead youth, the bringing of rain to Israel through Elijah’s prayers, and the “contest of the gods” between Jehovah and Baal. (Spoiler: Baal loses, his prophets are slain. It’s not an oratorio for the faint of heart.)

As usual, the Choral Society will have a massive presence on the stage, fielding some 300 singers, including Piedmont Children’s Choir, plus the California Chamber Symphony.

Listen online, get concert program information here. A few recommendations for live streaming from the 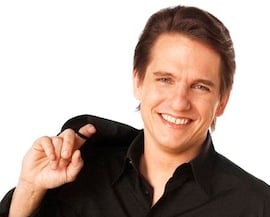 'Gambling for Love' and Opera in Fremont

Fremont Opera is trying to counter the worldwide financial meltdown by combining every possible attraction at a fund-raising event on Aug. 21, at Fremont’s Mission Coffee.

Verdi's Macbeth at the Movies

The current Royal Opera House revival of Phyllida Lloyd’s colorful (blood-splattered) production of Verdi’s Macbeth will be shown in movie theaters this week, including the Balboa. The schedule of 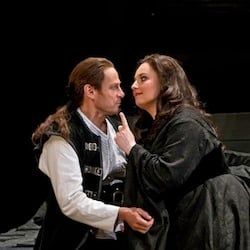 Keenlyside is well-known here from his San Francisco Opera and recital appearances — he is due at Herbst Theatre on Oct. 27.

But Monastyrska is new, up and coming. Huge, huge voice, but still “musical,” though not effortless. And in a production of grotesquely large, painted eyebrows, she seems to have her own. Listen to her as Santuzza.

Also, there is the Malcolm — a young American tenor, Steven Ebel, 6'5" with a voice to match, and aspirations for singing Wagner.

Are You Ready for the Liszt Bicentennial? Is Anybody?

It’s the 200th anniversary of Liszt’s birth, but if you blink, you may miss it. I don’t think it’s right. Born on Oct. 22, 1811, in Doborján (called Raiding in German), Sopron County, in the Kingdom of Hungary, Ferencz — later Ferenc and eventually Franz — Liszt had a vital role in the history of music, and not just through the varied wealth of his compositions.

Besides being “the Paganini of the piano,” leading a life that romantic novels are made of, establishing the Budapest Academy of Music (named after him), launching dozens of piano students, supporting a legion of important musicians and composers (including Wagner, whom Liszt rescued in several crises; Wagner married Liszt’s daughter, Cosima), the man is unfairly neglected.

One self-perpetuating problem is lazy programming by most music organizations, repeating the same two or three of his 19 Hungarian Rhapsodies, and the saccharine Les Preludes; rarely offering Années de Pèlerinage, Tasso, and the wonderful Petrarca Sonnets; yet not even considering such important works as the youthful Legend of St. Elisabeth and Faust Symphony, Consolations, chamber music, and both sacred and secular choral works. ...

San Francisco Symphony neither ignores Liszt nor honors him well. Out of the vast mother lode of his works, SFS picked two — one played on two different occasions. It’s a head-scratcher: The already overfamiliar Piano Concerto No. 1 in E-flat Major is performed with Lang Lang as soloist at the Sept. 7 season-opening gala, and then with Jeremy Denk during the June 21-23 concert series (which also has Bartók’s opera, Duke Bluebeard’s Castle, on the program. The remaining Liszt work is the symphonic poem Prometheus, Jan. 5-8. Well, at least, it’s not Les Preludes.

Thomas Hampson, 56 and an international star for three decades, is not only an unusually good baritone, but also unusual among singers. While the caricature of vacuous tenors is just plain dumb (you should focus on 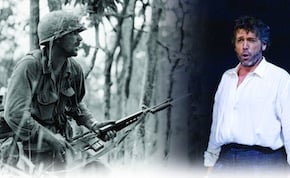 violist jokes instead), rare is the singer with Hampson’s renaissance interests and accomplishments.

Since his Merola days in 1980, Hampson not only has conquered audiences in opera houses, on concert stages, in recitals, and master classes everywhere, but also has made many contributions to the cause of music — especially to such otherwise struggling genres as contemporary and American compositions.

His Hampsong Foundation, for example, is dedicated to the promotion of art song in America and supports research and young artists. It is responsible for the Song of America Database, and the “I Hear America Singing” project, in conjunction with the Library of Congress.

It is no surprise, then, that Hampson is approaching the San Francisco Opera’s commissioned world premiere of Christopher Theofanidis’ Heart of a Soldier with intense preparation and research.

Between engagements in Zurich and Japan and at the Met (where he will sing the title role of Verdi’s Macbeth, which he also performed here three years ago), Hampson will create the main role in a work marking the tenth anniversary of the 9/11 attacks.

He will sing Rick Rescorla in Theofanidis’ opera, to be performed seven times in the War Memorial Opera House between Sept. 10 and 30.

Rescorla was a Vietnam veteran who died directing the successful evacuation of all 2,700 employees of Morgan Stanley when the World Trade Center collapsed on 9/11. The opera’s libretto, by Donna Di Novelli, is based on the 2002 book of the same title by Pulitzer Prize–winning journalist James B. Stewart.

In the book, says Hampson, “the enormous personal integrity of the main character literally jumped off the pages at me. This identity forged by a host of experiences, including the Vietnam War, was captivating.”

The baritone’s passionate interest in new music, especially by American composers, also motivated him to undertake the project: “I think very highly of the music of Christopher Theofanidis and am excited to be a part of his first large-scale opera. His music for Heart of a Soldier is swift and rhythmic and very accessible, and I believe that audiences will find it enormously compelling.”

Another main character in the opera is Rescorla’s wife, Susan, whose memoir is being published in the fall. In the book, Touched by a Hero, she writes about meeting Hampson recently, finding that “his build was perfect for the role” and that she was “even more thrilled” by discovering that the singer “has the same type of charismatic personality” as her late husband.

Researching the story, Hampson came to feel close to Rescorla, who “loved singing, and in difficult situations, he’d quote poetry or break into a Cornwall song. I suppose a tune would come to his mind that centered him and in turn the people around him, so they could withstand the kind of horrors that would have made the rest of us crumble.

“This warrior, husband, statesman, strong guy, literature-loving man had the heart of a soldier. It’s the poetry, the words, the symbols, the sounds, and the music that kept him going, centered his life.”

The score of Heart of a Soldier is not yet available, though other works by Theofanidis may give an indication of what to expect — try Rainbow Body or Fantasy for Violin and Piano.

Music direction of the opera is by San Francisco Opera Principal Guest Conductor Patrick Summers, the stage director is company Artistic Adviser Francesca Zambello, and set design is by Peter J. Davison, who made his SFO debut with the 2009 Porgy and Bess.

Over a sufficiently long span of time, people get used to all things, even very good ones, to the point of neglecting them. It took news from the Breckenridge Music Festival, in Colorado, about a concert featuring Robin Sutherland, that made me realize the extraordinary length of his service as principal pianist with the San Francisco Symphony.

Sutherland was still an undergraduate at the S.F. Conservatory of Music when appointed to that position by Music Director Seiji Ozawa four decades ago; he was the youngest principal musician in the orchestra’s history. Since then, over three decades, the appointment was reaffirmed by subsequent music directors Edo de Waart, Herbert Blomstedt, and Michael Tilson Thomas. He now occupies the Jean and Bill Lane Chair.

A Colorado native, Sutherland has appeared at Breckenridge several times. At tonight’s concert, he performs five Debussy Preludes, and is joined by Nathan Olson and James Holland for the Brahms Trio No. 1 in B Major. Helen Blackburn, Sandra Stimson, and Kenneth Krause join Sutherland for the “Damase Quartet” for Flute, Oboe, Clarinet, and Piano.

Sutherland studied with Rosina Lhevinne at Juilliard, and with Paul Hersh at S.F. Conservatory of Music. He was 17 when selected as the sole U.S. participant at the International Bach Festival, held at Lincoln Center. Sutherland is codirector of the Telluride Players and a regular performer at the Bay Chamber Concerts in Rockport, Maine. Among world premieres in which he has participated was that of John Adams’ Grand Pianola Music, with members of the SFS.