Mackerras: A Great Artist Is Gone 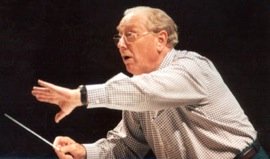 When Sir Charles Mackerras died last week, at age 84, there was an international outpouring of sorrow from Sydney to Edinburgh to Prague to San Francisco. He was one of the most respected and beloved conductors in the world.

Born in 1925, in Schenectady, N.Y., to Australian parents, Alan Charles Maclaurin Mackerras began his career in Sydney, and had a brilliant career as a renowned scholar and music director in East Europe, London, Scotland, and around the globe — including here.

At the San Francisco Opera, he conducted many productions between 1969 and 2001, including unforgettable performances of what he was the acknowledged master of, Czech works such as Janáček's Jenufa and The Makropulos Affair. He also had the title of the company's principal guest conductor, from 1993 to 1996. 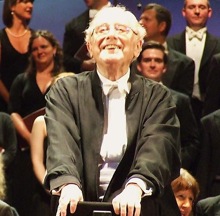 Sir Charles Mackerras brings just about everything to the table, even though his total lack of self-promotion may not have vouchsafed him to the level of public acclaim lesser colleagues imagine they are entitled to.

... in years to come, as real quality rises to the surface, it will be acknowledged that Mackerras was a uniquely gifted conductor, incapable of giving a bad performance. He can do anything, from Handel to Strauss, and although he has areas of expertise (Mozart and the Czech repertoire), he has never fallen victim to overspecialization.

He also distinguishes himself by his down-to-earth modesty, never seeking personal glory, never traveling with a retinue, and never playing politics to leapfrog to important positions. He does what he does for the joy and the glory of the music.

Every production, every rehearsal, and every community event with him was golden. He is such a great scholar, so penetrating, and yet generous to a fault ... The gala we organized for him on his 70th birthday in 1995 was one of the company's finest moments.

Three productions with Charles showed me he was a stickler for having singers sing the actual lines that the composer wrote. But he could graciously compromise if the situation warranted it.

When the great German baritone Hermann Prey wanted to hold the penultimate note of "Largo al factotum" for days, Charles said, "I'll let you hold it on opening night if I can have my way for the rest of the run." Prey agreed, and in the rest of the performances the aria's end was sung "a tempo."

Andrew Clark's obituary in The Financial Times says, "Few of the world's leading conductors could claim to be as versatile as Charles Mackerras. And few, late in life, continued looking at music with such open eyes and ears."

An example of that: shortly before his 80th birthday, Mackerras discovered details in the autograph score of Dvořák's New World Symphony that were at odds with established practice. Mackerras immediately tried out his discovery with the Czech Philharmonic.

It's MTT for Levine at Tanglewood 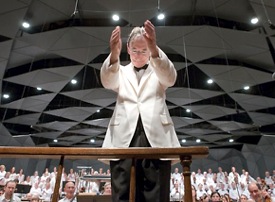 Boston Symphony Music Director James Levine had major back surgery in April, and has not recovered yet fully to lead concerts at the orchestra's Tanglewood festival. Filling in for Levine are Michael Tilson Thomas (July 9, 16, and 17), Hans Graf (July 25), and Christoph von Dohnányi (Aug. 1 and 2).

MTT took the lion's share of the substitutions, leading performances of Mahler's Second and Third symphonies, the Mozart Requiem, and Stravinsky's Symphony of Psalms. Reviews were all positive, including this from The New York Times:

At 65, Mr. Thomas is still limber, trim, and kinetic. Although his youthful energy enlivens his conducting, his music making is driven by deep insight, commanding technique, and decades of experience.

[Referring to Levine's absence] Vim and vigor, though a bonus, are not part of the job requirement for a music director. Several of the greatest performances I have heard were conducted by eminent, very elderly maestros. Still, simply being there is essential to a music director's success.

In addition, MTT, along with Stefan Asbury, worked with Tanglewood conducting fellows during the rehearsal process for the Tanglewood Music Center Orchestra program of Bach's "Ricercare" from The Musical Offering, arranged by Webern; Schubert's Symphony No. 5; and the Suite from Strauss' Bourgeois Gentilhomme.

MTT's history with Tanglewood goes back to his own student days there, four decades ago, and the beginning of his career. He was 23 when he won the Koussevitzky Prize there, and was appointed as an assistant conductor to BSO Music Director William Steinberg. He earned this headline for a magazine article in 1972: "The Inevitable Future of Michael Tilson Thomas."

The Concert: Win-Win for Film and Music 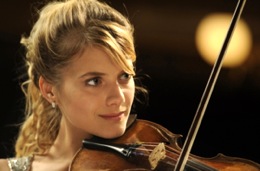 There have been scores of movies about musicians over cinema's past century, including those that are inaccurate but enjoyable (Amadeus), debatable (Shine), and just awful (Immortal Beloved — "beating Beethoven into meat loaf," said the Guardian unkindly, but accurately).

There is a new one out (already released elsewhere, coming to the Bay Area on Aug. 6), and it's worth your attention, first impressions notwithstanding.

You read the synopsis for The Concert, and if you have ever seen a really bad movie, you just know this will be the worst of the worst.

But something very strange happens when you actually see the film. At first funny — if outlandish — and compelling, it slowly morphs into a gripping, moving work, with a lengthy, mesmerizing finale of the Tchaikovsky Violin Concerto in performance. 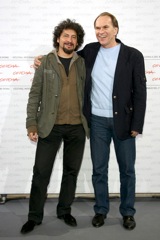 I don't know how it is done, but The Concert not only overcomes its silly-story baggage, but soars into a rare space of intimate, personal communication. It is one of the very few in the horde of movies "about" classical music that uses music as the leading character, not just an awkward prop, and it fuses with music to give the viewer/listener a lasting experience.

There are some minor missteps — such as the old, tired "animated map of a triumphant concert tour" and a jarring "funny" shot in the middle of the ecstatic finale — but nothing remotely enough to spoil the total effect of the film.

When I saw the director's name — Radu Mihaileanu — it was vaguely familiar. Perhaps one of those contemporary Romanians with bleak-and-unforgettable films?

No, he is actually the man responsible for one of my favorites in recent years, Live and Become, the story of an Ethiopian boy pretending to be Jewish to take part in the secret Falasha migration to Israel.

Mihaileanu's two films could not be more different, and yet there is the same stamp on both: movie-making from the heart. Also, there is that good old "victory of the underdog" scheme, but without the noise and obviousness of Rocky and its ilk. Mihaileanu's writing collaborator is San Franciscan Matthew Robbins. As in the Israeli film, this Russian-French story is performed by a great cast, headed by Aleksei Guskov as the conductor, and Dmitri Nazarov as the sweet, hulking cellist/ambulance driver.

The French violinist whose secret story is first the subtext and then the focus of the film is played by Mélanie Laurent (of Inglourious Basterds), a superb actor, using almost no visible means to communicate complex emotions. Miou-Miou, one of the busiest French actors, has a brief but important role.

The orchestra used for the soundtrack is a virtuoso one, required to play badly (the hard part) and then surpassingly well. You won't find the information on IMDB, but it is the Budapest Symphony Orchestra, conducted by Armand Amar; the brilliant (unseen) soloist is violinist Sarah Nemtanu.

Jacqueline Bisset and Emma Thompson are listed for "special thanks," but I have no idea why; I don't believe they made an appearance.

I wish you could see The Concert the way I did, expecting nothing or worse. But I cannot tell a lie just to set you up with the right kind of expectation: unless you are allergic to any degree of sentimentality, this is a Live and Become of music films.

A Big, Ambitious Season for Chanticleer 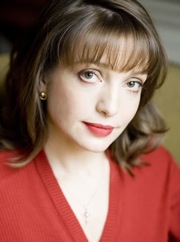 San Francisco's Grammy-winning men's chamber chorus, Chanticleer, opens its 2010-11 Bay Area season on Sept. 14 at Mission San Luis Obispo, with the first of 32 concerts to be given throughout Northern California.

The season will see the release of new recordings, including A Chanticleer Christmas, of live performances in Stanford's Memorial Church.

In spring concerts March 26-April 1, The Boy Whose Father Was God offer a musical retelling of the life of Jesus, beginning with his childhood. The composers: Panufnik and Michaelides, Bates, John Tavener, Arvo Pärt, and Jaakko Mäntyjärvi.

Romantic Chanticleer next June will have the music of Daniel-Lesur, Poulenc, Sviridov, Mahler, Whitacre, and Paulus.

Songs made famous by Lena Horne, who died in May at age 92, serve as the music for a new work choreographed by Tina Kay Bohnstedt to open Diablo Ballet's next season, Oct. 15-16.

The "Inside the Dancer's Studio" March and May programs will be staged at the Shadelands Arts Center Auditorium in Walnut Creek. This venue places the audience close to the stage, and each performance is followed by a Q&A with the dancers.