Homie Canin Is Back Home

Although he has never left, former San Francisco Symphony Concertmaster Stuart Canin is now officially back here, for good. Since 1969, he has been back and forth between San Francisco, Los Angeles, and music festivals around the world.

Last month, Canin finished up almost a decade as Concertmaster of the Los Angeles Opera. Having played through three cycles of the Wagner "Ring" in L.A., Canin was "fresh as a daisy," he says. He left with the high honor of having the concermaster's chair named for him in perpetuity.

Canin says the recognition for the years of his work there — with Music Directors Kent Nagano (who hired him) and James Conlon — was just as meaningful as some other highlights of his remarkable career.

It began in 1936 with an appearance on one of the country's favorite radio shows, Fred Allen's "Town Hall Varieties." Ten-year-old Canin played Schubert's The Bee, and Allen said the child "already plays better than Jack Benny." Benny, in response, panned Allen mercilessly, and the on-air feud — a gag, as the two remained good friends — continued until Allen's death 20 years later.

At age 19, Rifleman Canin played the violin at the 1945 Potsdam Conference for Truman, Stalin, and Churchill. He recalls Cecilienhof, the building where the event took place, was the only one standing in the rubble of this Berlin district in 1945. Truman liked Canin's playing so much that he invited him back twice more, along with another GI, pianist Eugene List.

The amateur pianist president himself got into the performance, with — as usual — the Missouri Waltz, and told Canin wistfully: "Sometimes I wonder if the country would be better off if I became a concert pianist."

In 1969, Seiji Ozawa hired Canin as concertmaster for the San Francisco Symphony, but for almost a year, before Ozawa's own appointment was announced, Canin played with the orchestra while keeping his position a secret. 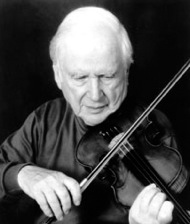 As the Symphony and Opera were served by the same orchestra, with some first chairs taken by different musicians, multitasking Canin also appeared as concertmaster of the Opera Orchestra, 1968-1971, until his SFS position became official.

After Ozawa, Edo de Waart took over, and Canin departed for Los Angeles in 1980, playing for the Hollywood studios and "the big bucks," a necessity in putting two sons through medical school.

While in the Southland, Canin also worked as concertmaster with Long Beach Opera (at times under the baton of Nicholas McGegan), the Master Chorale, and elsewhere.

Meanwhile, in the Bay Area, Canin was a founding music director of the New Century Chamber Orchestra (1992), and Berkeley Symphony concertmaster under Nagano. Through the years, he played chamber music at the Aspen Music Festival, the Spoleto Festival of Two Worlds — both in Spoleto and Charleston — and elsewhere.

But, after all that, this is the quote from Canin today: "I am not retiring."

With James Levine recovering slowly from a back injury, and Michael Tilson Thomas substituting for him at Tanglewood there was speculation about a possible MTT succession as music director of the Boston Symphony. 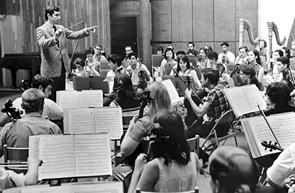 "MTT: Is He the One to Replace Levine?" asks the straightforward headline in The Berkshire Eagle, calling MTT's attraction "unmistakable."

In the keynote address at the music center's opening exercises this month, he invoked that tradition, recalling Koussevitzky's vision in founding Tanglewood.

Whether consciously or unconsciously, the words and the charge to the students — "We're all in this together" — echo sentiments spoken by Koussevitzky and Leonard Bernstein on similar occasions. Tilson Thomas is, in fact, the closest thing we have to a Bernstein today: conductor, composer, pianist, teacher, master of the media, and advocate for music. 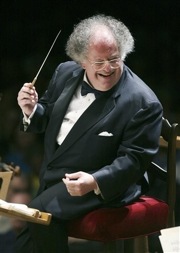 It was not always so. Tilson Thomas admits he was a know-it-all as a Tanglewood student in 1968 and 1969, and associate conductor and principal guest conductor during the next five years.

Like Bernstein, he made a sensational New York debut as a last-minute substitute for an ailing music director (in his case, William Steinberg).

And yet, concludes the piece, while MTT would "offer charisma, vitality and a new face for an old institution, [and] he would provide a link with the past and close a circle ... let's not bury James Levine yet. He's still the boss — and a great conductor."

All rumors and speculations seem to miss the fact that MTT is staying put through the upcoming celebration of the San Francisco Symphony's 100th birthday, the 2011-2012 centennial season. Changes, if any, would take place years from now.

Whatever happens in Boston, almost certainly, Levine will continue his 40-year-long career with the Metropolitan Opera. About the possible move of a San Francisco maestro to the Boston Symphony, it has been done before: Seiji Ozawa first appeared here in 1962, then served as music director, 1970–1976, overlapping with his years in Boston, 1973-2002. 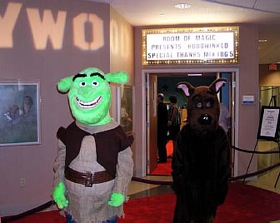 An unusual audio and home theater store in Mountain View is doing something unusual and special. Audio High is sponsoring a complete cycle of Beethoven piano sonatas, all for a benefit.

Robert Silverman will perform the 32 works, in eight concerts, in San José's Le Petit Trianon, Sept. 9-April 14. All proceeds will benefit the Elf Foundation for sick children, the money to be used to build a "Room of Magic" at Stanford Children's Hospital.

Additionally, Audio High is producing a CD set of the concerts, for additional contribution to the Elf Foundation.

Audio High owners Michael and Claire Silver have "fallen in love with Silverman's artistry" when listening to his 2003 Live at Chan Centre CD. Of the Elf Foundation, they say, "It is a great organization that brings the magic of music and movies to kids and their families being treated at Children's Hospitals throughout the country." 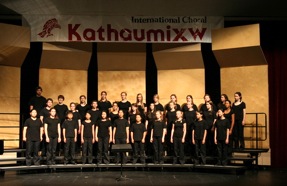 Robert Geary's Piedmont East Bay Children's Choir has once again triumphed at an international competition, placing first and second at this month's International Choral Kathaumixw in British Columbia. The choir has 350 students from 18 Bay Area cities, participating in 13 choral groups.

In a field of children's, youth, and adult choirs from 13 countries, Piedmont won first prize in the contemporary music category, with performances of music by Mark Winges and Olli Kortekangas; and a second prize in the Children's Choir category (placing behind Le Cygale de Lyon from France) with the music of Sue Bohlin, William Byrd, and Eric Tuan.

Kathaumixw, a word used by the Tla'Amin people of the Sliammon First Nation of Canada, means "a gathering together of different peoples." 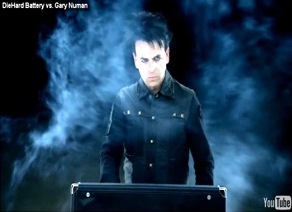 There are a few commercial plugs out there that are so outrageous you just have to give in to them. This is one of them. Totally innocent of any connection with manufacturers and merchants of car batteries, I cannot resist passing this on.

The DieHard Torture Labs (yes, that's what they are called) "have pushed batteries to the limit once again and are releasing two new videos that demonstrate the performance and reliability of DieHard Platinum Batteries."

We'll ignore "Extreme Heat," but take up the cause of "Extreme Keyboard," as described by the company:

In "Extreme Keyboard," musician and composer Gary Numan powers up a double-stack keyboard with a DieHard Platinum battery. With 24 black and white cars (all with their original batteries removed) serving as his ebony and ivory, Numan plays a unique version of his classic rock hit Cars, using the cars’ horns. After the musical interlude, the DieHard Platinum battery is still ready and ignites all 24 cars.

OK, here's the other one:

In "Extreme Heat," a DieHard battery is transported to the Mojave Desert where it is torn apart by a bullet from a .458 caliber guide rifle and still has the strength to start a pick-up truck on the first try after impact.

And now, unlike these batteries, we'll stop, exhausted.
Back to top

How Streetcar Was Born 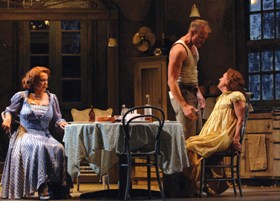 One of the many backstage stories in Lotfi Mansouri, an Operatic Journey, published last week, is the search for the composer of A Streetcar Named Desire, the 1998 opera by André Previn, commissioned by Mansouri.

The San Francisco Opera general director started the quest for somebody to set to music "Blanche who would rival Norma or Lucia" by approaching Leonard Bernstein. Busy in Vienna, Bernstein expressed no interest. "I still think Bernstein could have written the Great American Opera on a subject like that," writes Mansouri.

Next, after "checking out Canadian composers" (while still running the company in Toronto), Mansouri turned to Sondheim — "one of my all-time favorites, Follies, is incredibly brilliant, almost Felliniesque" — even though "Sondheim is afraid of opera and says he doesn't like it."

Offered Streetcar, Sondheim "told me it was such a wonderful play it didn't need music. I replied that one might say the same thing about Othello and Falstaff ... but he just wasn't interested."

The sequence after that, before Previn got the commission, is interesting: Franco Zeffirelli turned up with a shared interest, and (while "his productions became bloated"), he helped Mansouri contact Williams' troublesome estate. Zeffirelli also championed Hollywood composer David Grusin. That didn't work, but Mansouri kept looking for an American composer.

Samuel Barber was busy, Mansouri found Corigliano's The Ghosts of Versailles a pastiche. John Adams "would be wrong for it."

"Getting desperate," Mansouri thought about Hans Werner Henze (whose Das verratene Meer had its U.S. premiere in San Francisco during the Mansouri years). Next: Harrison Birtwhistle ("his score would probably have appealed to seven people"), and finally Previn.

As to Streetcar, John Ardoin's review of the premiere opened with "The San Francisco Opera is a company that has always concerned itself with opera as a living force."

A Mature Salome From Verbier

Among the many great and free Medici.TV Web casts from the 2010 Verbier Festival is Richard Strauss' Salome, live at 10 a.m. PDT on Aug. 1, and then available in the recorded version.

Valery Gergiev conducts, Deborah Voigt sings the title role, and Gwyneth Jones and Siegfried Jerusalem are Hérodias and Hérod. As Jones is 73, and Jerusalem 70, and both have been inactive for some time now, it is an unusual casting. (Voigt is only 50, but ...)

At the other end of the age scale is Yuja Wang, 23, with great concerts on July 16, July 20, and July 28, with the omnipresent Joshua Bell, who has just appeared at Festival del Sole.

Age, of course, is immaterial to Martha Argerich: July 17. Also, a Villazon/Grimaud concert on July 31.