Pacific Musical Society, which in its 102 years has supported youngsters such as Yehudi Menuhin, Ruggiero Ricci, and Leon Fleisher, will have the 2012 finals open to the public in a series of free concerts.

The venue is the San Francisco Conservatory’s Osher Salon, the date is March 25. Instrumentalists will perform from 9 a.m. to noon, pianists from noon to 3 p.m., and vocalists from 3 to 5 p.m. At stake: awards totaling more than $20,000 — all from private contributions.

Among the finalists is 10-year-old violinist Sean Takada, a student of Bettina Mussumeli in the San Francisco Conservatory Preparatory Division. He won first place in the Yehudi Menuhin–Helen Dowling Competition. 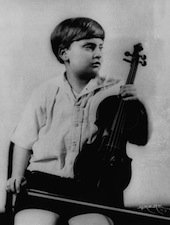 Takuda and his friends presented a benefit recital for Japan Earthquake Relief in Palo Alto last year and raised over $7,500. Sean plays in a competitive soccer club, and he is trilingual, in English, Japanese, and Spanish.

Instrumental judges on Sunday are Don Ehrlich, Ian Robertson, and Emil Miland; for pianists: Hang Li, Chia-Lin Yang, and Randall Benway; for singers: Karen Anderson, Roz Barak, and Robertson. These are the finalists: 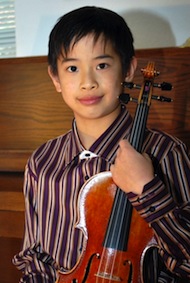 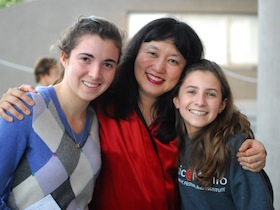 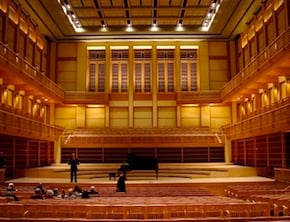 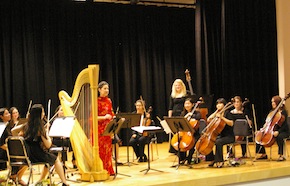 Guest harp soloist Anna Maria Mendieta praised the school’s Virtuoso Players for being “supremely attentive and aware accompanists, which is the hallmark of mature and generous musicians.”

Each section performed in the Fanfares for String Orchestra, Concertmaster Caitlin Gowdy (class of ’12) and Associate Concertmaster Niki Fukada (’13) taking solo turns in the “Sicilienne” and the “Tango Suite,” respectively. 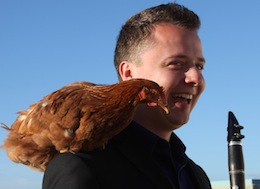 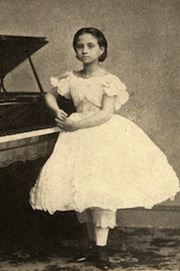 Reports of the Los Angeles Philharmonic’s Mahler concert in Venezuela mentioned “Carreño” both as the name of the Caracas concert hall where it performed and of the Simón Bolívar Symphony Orchestra concertmaster, Alejandro Carreño. The young man apparently is a distant relative of the woman for whom the hall — and the Teresa Carreño Youth Orchestra — is named.

Teresa (1853–1917), a child prodigy from Venezuela, made her debut in New York in 1862, to great acclaim. A year later, she played for President Lincoln in the White House. After 1866, Carreño spent most of her life and career in Europe, living in Berlin, and returning periodically to the U.S. on concert tours.

She was also active as a singer, composer, and conductor. She studied with Louis Moreau Gottschalk and Anton Rubinstein. As an adult, Carreño became recognized as one of the great pianists of her time, and she continued to perform on the concert stage until just weeks before her death in her New York City home, the Della Robbia on West End Avenue.

Pianist Eugen d’Albert was one of her four (consecutive) husbands. Besides the hall and the orchestra named for her, there is also a crater on Venus bearing her name. There are piano rolls of her performances still in existence.

Shanghai Musicians at the S.F. Conservatory

During the San Francisco Shanghai Chamber Music Festival this week, concerts on Thursday and Friday will feature works and performers from both conservatories.

This is the second installment of a festival inaugurated in Shanghai last May as part of a five-year agreement between the sister-schools to produce annual events in alternating locations. The San Francisco Conservatory’s participation in the festival is made possible by a grant from the Cha Foundation of Hong Kong.

On March 15, works by Mendelssohn and Brahms will bracket San Francisco student Sahba Aminikia’s One Day: Tehran and Shanghai student Zhu Yiqing’s An Elegy in the Dark Moonlight, in addition to Music for String Quartet and Sheng by Shuya Xu, president of the Shanghai Conservatory. 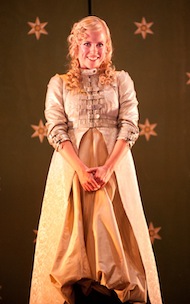 Participants have been selected from some 900 applicants for this, the oldest such program for young artists, and one that has produced hundreds of professionals and scores of opera stars over the years. 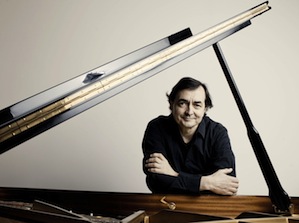 Unusual, to amend the subject line, for other pianists, but not for Pierre-Laurent Aimard, one of the most adventurous and daring virtuosos on the scene. His March 27 San Francisco Performances recital consists of works by Kurtág, and both rarely heard and standard Schumann, Liszt, and Debussy pieces.

Aimard, who is artistic director of the Aldeburgh Festival, has served as artistic adviser to Exquisite Labyrinth, Southbank Centre’s Boulez Festival.

Composers György Ligeti and György Kurtág are among Aimard’s specialties, and he will perform seven pieces by the latter.

Joffrey Documentary at the Balboa 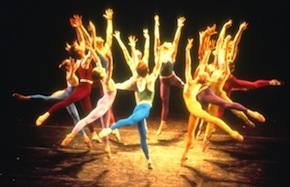 In the good old days of annual visits to the city by the Joffrey Ballet, we had a regular fix with the great company, but it’s been a long, long time. Make up for it by catching a new documentary, Joffrey: Mavericks of American Dance, showing at the Balboa Theater on March 19.

Attending the screening will be director Bob Hercules and several Joffrey alumni for a Q&A to follow the film. Narrated by Mandy Patinkin, the film documents how the Joffrey revolutionized American ballet by combining modern dance with traditional ballet technique, combining art with social statement, and setting ballets to pop and rock music scores — among the first that started these now-popular trends.

The documentary includes rare archival footage, along with interviews with former and current Joffrey star dancers, and shows how the company repeatedly resurrected itself after devastating financial and artistic setbacks, and went on to introduce cutting-edge choreographers such as Twyla Tharp, Laura Dean, and Margo Sappington to larger audiences.

There are excerpts from such seminal Joffrey works as Astarte, Trinity, and Billboards, plus collaborations with choreographers Twyla Tharp (Deuce Coupe), Kurt Jooss (The Green Table), and Leonide Massine (Parade). 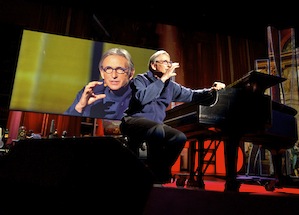 Michael Tilson Thomas took time out from preparations for the American Mavericks Festival to present a lecture at the distinguished forum of TED (Technology, Entertainment, Design). His subject: A history of classical music.

An excerpt from the report on the event:

In the early days, music was written to mirror God’s mind as seen in the design of the night sky. The “how” in this era: polyphony, independently moving voices that suggest how the planets move. “Truly this was the music of the spheres.”

Then, in 1600, came the birth of opera, a development whose “what” was not to mirror the mind of god but to follow the emotional turbulence of man. The how, now: to stack up chords of harmonies, with an incredible variety of emotions. Here, Tilson Thomas takes a moment to contemplate the difference between a major and a minor chord, the difference between happiness and sadness. “37 freaking vibrations,” he says drily, to applause.

Around 1880, music changed once again, as a new, miraculous way of passing things on meant that people could now hear music all the time, without needing to be able to play an instrument, read music, or even go to a concert. “Technology democratized music by making everything available; it spearheaded cultural revolution,” says Tilson Thomas. “Technology pushed composers to tremendous extremes; computers and synthesizers [prompted] intellectually impenetrable complexity.” And at the same time, technology pushed us to live in a culture of improvisation that is sliced, diced, distributed, and sold. What is the long-term effect of this? No one knows. But one real question remains: What happens when the music stops? What sticks?

Lucy Jones reports on exciting concerts in London and raises the question. In general, the answer may well be Yes, but the specific case is really bothersome:

The traditionally stifling, snobby atmosphere is definitely something we should bid good riddance too, but there’s a fine line between rebellion and rudeness, and this outburst sounded a bit ridiculous. But, in any case, the UK’s classical music revolution is thrilling, and a physical expression every now and again can be galvanising. 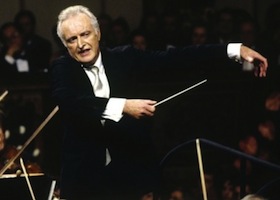 A review in the Guardian says:

Charles Barber’s new book gives us the troubled, funny perfectionist behind the ecstatic music-making There are musical myths — and then there’s Carlos Kleiber. The conductor — voted last year by 100 members of his profession as the greatest of all time, ever, in BBC Music Magazine — was, even before his death in 2004, the embodiment of the enigmatic reclusive genius — the maestro who, as Herbert von Karajan put it, would only conduct when his freezer was empty.

... He was one of the funniest, most communicative musicians who ever lived, but never gave an interview; he was tormented by the ghost of his father, the great conductor Erich Kleiber; and he once gave a concert as long as his fee was a new Audi A8 with all the trimmings.

There are grains of truth in all of those (the Audi one is definitely true), but there’s much, much more to Kleiber than the myth-making. At least there is now, thanks to Charles Barber’s astonishing new book, Corresponding With Carlos: A Biography of Carlos Kleiber. Charles had a unique relationship with Kleiber. As a conducting student at Stanford University, with dazzling boldness and naivety, he wrote to Kleiber out of the blue and said he wanted to study with him.

The key was Barber’s use of humor and irony to attempt to elicit a response from Kleiber — it worked. Barber never formally became a student of Kleiber’s (nobody ever did), but from 1989 until the maestro’s death, he corresponded with the supposedly unknowable Carlos, and as well as this vivid account of Kleiber’s life, Barber’s book publishes pretty well the complete letters he received.