Swimming in the Rhine, Digitally 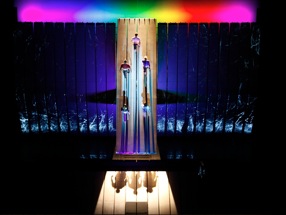 Those listening last night to the live streaming of the Metropolitan Opera's season-opening performance of Wagner's Das Rheingold — and, even more, those who missed it — may want to see Robert Lapage's acclaimed new production.

On Oct. 9, beginning at 10 a.m. PDT, more than 1,500 theaters in 46 countries will carry the live HD telecast of the fourth performance. It is also being broadcast live over the Toll Brothers/Met network, Sirius, Rhapsody, and more.

There will be 12 productions seen in HD transmission on Saturdays, ending with the new Die Walküre on May 14. Participating venues in the Bay Area include 26 theaters dotting the map. 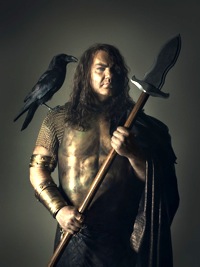 The new Ring production at the Met is conducted by James Levine, and it features Bryn Terfel as Wotan, Stephanie Blythe as Fricka, Richard Croft as Loge, and Eric Owens as Alberich.

Applause for new Ring productions is always mixed with criticism, and there were some boos when Lapage made his bow. You would definitely want to form your own judgment.

Alex Ross has written an eloquent defense of big spending for Wagner:

A 45-ton set will test the theater's foundations; a reported $16 million budget will test the company's finances. In the midst of economic troubles, is it seemly to spend such a vast amount on a spectacle that will be seen by a relatively small, elite audience?

... [an] effective riposte comes from Wagner himself. Amid his absurd and repulsive pronouncements on all manner of topics, you can find some acute insights into music's place in society. He did not write for the high and mighty; his music is as much a critique of power as an exercise in it. And at a time when so much cultural expression seems secondhand and retrospective, young artists have much to learn from Wagner's mad ambition.

In a review of the opening performance on Monday, Martin Bernheimer writes in The Financial Times: 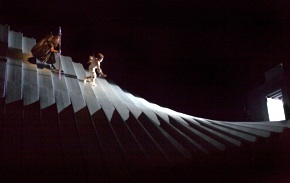 Das Rheingold used to be a mythological music-drama about love and greed, power and weakness, idealism and treachery. As presented here, it is a hi-tech pageant about the 24 scenic planks. ...

Lepage, who was booed at his curtain call, doesn't really tell the story of Rheingold. He seems too busy playing with his toys. Essentially, he relegates his hapless singers to the foreground where they bumble in quest of motivation. Sporting ugly quasi-historic costumes, they ascend the planks infrequently, manoeuvre the obstacle courses gingerly. Even the stunt-doubles on wires climb the walls with caution. The action remains static, the temperature low.

If there is drama in this Rheingold, it emanates from the pit. James Levine, returning after a siege of health crises, conducts with breadth that never hampers vigor, with a fine ear for motivic detail and canny concern for dynamic arches. The mighty Met orchestra plays for him like a perfectly balanced ensemble of inspired virtuosos. ...

The eyes and ears of the music world were supposed to be magnetised by this epochal Rheingold. As a quixotic fate would have it, the ears fared better than the eyes. Much better. 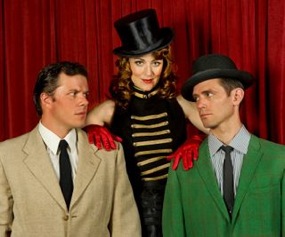 Ensemble Parallèle Artistic Director Nicole Paiement has announced casting for the San Francisco premiere of Philip Glass' Orphée, which she will conduct Feb. 26 and 27 at Herbst Theatre.

Eugene Brancoveanu stars as Orphée, a role he created for the opera's European premiere in Salzburg. Adler Fellow Susannah Biller portrays Eurydice. Marnie Breckenridge takes on the role of the Princess.

John Duykers and Philip Skinner, both in the cast of last season's production of Berg's Wozzeck, join the cast as Heurtebise and Poet/Judge, respectively. Tenor Thomas Glenn performs Cégeste/Reporter.

You don't need to wait until February to hear Breckenridge. Formerly heard in Berkeley and San José, the soprano is now back from Glyndebourne and Castleton, and she will sing the world premiere of David Conte's Sexton Songs with Paiement at the S.F. Conservatory of Music on Oct. 9 as part of the Blueprint Series. 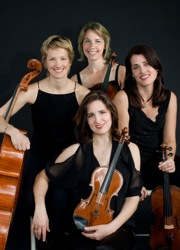 For the rest of the season in Burlingame's picturesque mansion, there will be an evening of French Baroque music for Christmas, with the Aulos Ensemble (Dec. 12); the Miró Quartet playing music by Schubert and Beethoven (Jan. 23); the Daedalus Quartet performing Mozart, Berg, and Schumann (Feb. 27); the Lydian String Quartet with cellist Rhonda Rider, playing quintets by Boccherini and Schubert (March 20); the Harlem Quartet with an unusual program of Haydn, Schumann... and Wynton Marsalis (April 3), and the Alexander String Quartet closing the season on May 1.

All subscription concerts are held Sundays, beginning at 7 p.m., preceded at 6 by free preconcert talks by musicologist and program annotator Kai Christiansen. Programs are followed by complimentary receptions with the performers. 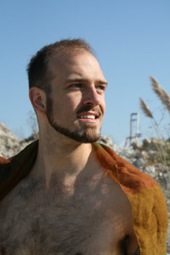 In an intriguing and complex move, American Bach Soloists and choreographer Todd Eckert have joined to create three works in collaboration. The first piece, Sinfonia, will be performed at Eckert's annual showcase, 4 Shared Space, Nov. 5-7 at Dance Mission Theater.

Two more pieces will be prepared for performance in July, at the 2011 Summer Academy, being held at the S.F. Conservatory.

Sinfonia uses excerpts from Bach sonatas, selected and recorded by ABS. Eckert is choreographing a work based on the 12th-century poetry form called the sestina — a highly structured poem that contains six six-line stanzas.

The same set of six words ends the lines of each of the six-line stanzas, but in a different order each time. Eckert says he was "excited to discover how one might follow this highly formal structure in the creation of a dance." The 18-minute work introduces a "dance equivalent" for each of the six repeating words (a character, a relationship, a movement phrase, a costume or a prop, and so on) and then weaves them together in six sections following the form of a sestina.

The former Berkeley Opera (now "West Edge") had a well-received production of Mozart's Don Giovanni in February, and in a rare example of regional cooperation — of which there should, and will, be more in the impecunious future — it's going to the Livermore Valley Opera.

This is the Mark Streshinsky production, with several singers from the Berkeley cast, including Eugene Brancoveanu in the title role. Others in the cast are Melody King (Donna Anna), Marie Plette (Donna Elvira), Roberto Perlas Gomez (Leporello), Jennie Litster (Zerlina), and Sean Sullivan (Masetto). Performances are on Oct. 2, 3, 9, and 10.

French Flair Back at Home (Here)

Michael Tilson Thomas and the San Francisco Symphony are presenting a program of French classics (Sept. 29, Oct. 2 and 3) that made a big impression on their European tour. In Lucerne and Milan last week, performances of the music of Berlioz and Ravel brought this kind response from a breathless reviewer in Milan's Corriere della Sera:

Back after a gap of 23 years, this great Californian outfit, under Michael Tilson Thomas, captivated a full house at the Teatro degli Arcimboldi with French repertoire. With the gestures of a natural charmer, despite his short jacket, Tilson Thomas demonstrated how his stealthy, charming lioness of an orchestra can lose itself in that hazy, billowing world, matching tone for tone, more on a sensory than a structural level.

Now, as close as Davies Symphony Hall, you can see for yourself MTT's charm and short jacket, and hear 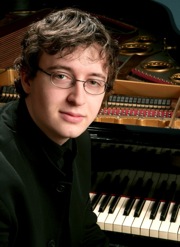 The program stays in the French romantic domain, but the pieces are different: Ravel's ever-popular, occasionally overplayed Rapsodie espagnole, Debussy's First Rapsodie for Clarinet and Orchestra (featuring the orchestra's leonine clarinetist, Carey Bell), Debussy's Fantasie for Piano and Orchestra (with Jean-Frédéric Neuburger), and then a Romeo and Juliet switcheroo.

For too many years, Davies Hall has been home to umpteen repetition of excerpts from the Prokofiev ballet score for "R&J." But on these concerts, it will be the much more rarely played and utterly ravishing music from Berlioz' "symphonie dramatique" — Roméo et Juliette. The scheduled excerpts are Introduction, Love Scene, and Romeo Alone - Festivity at the Capulets.

Bell is the much-acclaimed principal clarinet of SFS, a member of the San Francisco Contemporary Music Players, and a soloist with orchestras and chamber ensembles. Previously, he held principal positions with the S.F. Opera Orchestra and the S.F. Ballet Orchestra.

Neuburger (pronounced Nu-bour-jhay) studied at the Académie Maurice Ravel and the Paris Conservatoire, where he received highest honors in piano, accompaniment, and chamber music. He is now a professor at that school, while touring in Europe and the U.S. for solo appearances.

A free audio podcast about the Berlioz is downloadable from both the SFS Web site and the iTunes store. Portions of these concerts will be broadcast on Classical 102.1 KDFC-FM, at 8 p.m., on Oct. 12. 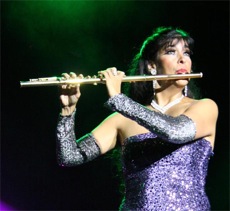 Not sure why it's called the San Francisco International Flute Festival because the event is held in Half Moon Bay (20 miles away), but one possible reason is that the organizer of the event, Viviana Guzman, lives there.

Be that as it may, this is a promising event, including flute everything — performance, competition, master classes, flute choirs, flute vendors, and so on. It's on 10-10-10 (aka Oct. 10), from 8 a.m. to 8 p.m., at the Bach Dancing & Dynamite Society in Half Moon Bay. 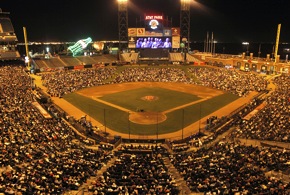 Friday's San Francisco Opera simulcast of Aida drew a record crowd of more than 32,000 to AT&T Park. For the first time since the since the 2007 debut of Opera at the Ballpark, the stadium's upper deck was opened to accommodate the audience. This annual event, presented in partnership with the San Francisco Giants and Webcor Builders, has become one of the city's favorite free entertainment events.

There is no question that simulcasts attract new audiences, but is it possible that they provide a quantifiable profit margin? No less a money authority than The Wall Street Journal raises that possibility, based on the "captive audience" in the ballpark.

An article by Pat Johnson says:

The San Francisco Opera is far from the only opera company that has tried to build its audience with free outdoor simulcasts of performances. But it may be the only one that ekes out a small profit from them.

... location is the key to the simulcasts' success. Such events at other operas often take place in open-air plazas where the crowd can come and go. By using the ballpark, the San Francisco Opera is able to collect contact information from first-time opera-goers who register for the free event to get early admission.

Using that data, the opera says it has been able to figure out that new-patron tickets linked to the simulcasts have brought in about $880,000. That puts the opera — which says it has spent about $800,000 on its four previous simulcasts — slightly in the black with its simulcast endeavors. Also helping the bottom line: the Opera cuts its costs by producing the simulcasts in-house.