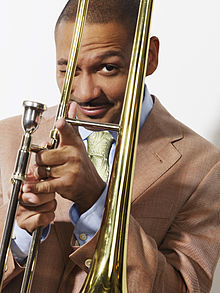 In the Name of the Father: Another Marsalis Great

Delfeayo Marsalis gets to the phone in his New Orleans residence at about 12:30 in the morning, his time. This is the lifestyle of a multitalented musician from a multitalented family.

He’s been working late as music director on Bolden!, a biopic about Buddy Bolden, credited as one of the African-American founding fathers of jazz, at the beginning of the last century. Delfeayo’s brother Wynton Marsalis, at 53 four years his senior, is composer of the film’s soundtrack. Wynton does double-duty as the source of the sound of Bolden’s cornet, Wynton’s second instrument behind the trumpet he’s won Grammys with, in both jazz and classical categories. And Delfeayo, whose instrument is trombone, works with the film's actors, among them Downton Abbey cast member Gary Carr in the title role, “to have a certain look of authenticity while the guys are performing.”

Bolden!, directed by sometime Kentfield resident and Hyatt Hotel heir Dan Pritzker, will open in 2015. In the meantime, Delfeayo has headed into the recording studio and out on the road with Ellis Marsalis, the 79-year-old jazz pianist and father of musicians Branford, Wynton, Delfeayo, and Jason (in sibling order), as well as Ellis III, who’s in computers, and Mboya, who’s autistic. Ellis, who also lives in New Orleans, is touring with Delfeayo behind their upcoming album release, The Last Southern Gentlemen, on the Troubadour Jass label. They’ll be stopping at Yoshi’s San Francisco next week and at the Mondavi Center in Davis and the Monterey Jazz Festival later this month.

In his album liner notes — a literary medium in which he’s both experienced and expansive — Delfeayo includes relevant short stories, poetry, and an essay titled, “On Embracing African (Southern) Manners and Ingenuity.” “When we think about Southern hospitality, we think about Gone With the Wind,” Delfeayo points out in our interview, “but my readings and research have confirmed my belief that the idea of Southern hospitality came from the African. And the crux of the liner notes is, the reason that jazz was birthed in the South is that you had a new American family birthed on the plantations, and that family was the combination of the Europeans and the Africans, living together. It was one big family, having to figure out how to coexist.”

The album’s songlist, featured on tour, might be seen as representing a sort of coexistence. Most of the ballads are jazz standards, written by European-American songwriters, arranged and interpreted here by African-Americans, including, besides the two Marsalises, bassist John Clayton and drummer Marvin “Smitty” Smith. There’s also a pair of originals, by Delfeayo and his youngest sibling, Jason, and a sendup of the theme from Sesame Street. “Nobody knows it, but Sesame Street is a 12-bar blues. And that really goes to show you, the blues is such a great thing.”

“The reason that jazz was birthed in the South is that you had a new American family birthed on the plantations, and that family was the combination of the Europeans and the Africans, living together. It was one big family, having to figure out how to coexist.” — Delfeayo Marsalis

And the engaging style in which the 13 tracks are delivered is, says Delfeayo:

A celebration of the African ancestry, and the importance of the groove in the music, and the spirit and the soul. These are things that are not being emphasized in our schools, because with our young students, everyone wants to find something which is different and unique. Music is removed from its functionality … In African culture, everything has a function. It’s not in the African tradition to say, ‘hey, let’s just make some paintings to put on our walls.’”

Delfeayo and his siblings enjoyed a musically richer education in the schools of New Orleans in the 1960s and ‘70s, where father Ellis taught at both the high school and university levels. There were lessons after school, too, with Ellis moonlighting at the keyboard in the city’s clubs. “He’d bring us to his jazz gigs that had five or six people in the audience,” Delfeayo remembers.

We went because there were these old men who would tell us dirty stories, and we’d play darts, and they had really good hamburgers. But what really stuck out was that he was there doing that, when he could be doing something else. He had to have a love for what he was doing. And some musicians use the road as an excuse to not have to deal with family matters. But he had a major involvement with us. It wasn’t so much the quantity of the hours, but the quality.

This quality and the love which abides are evident both in the musical exchanges on the album and in the photos of father and son, who in one shot are facing each other across a chessboard. “He showed us how to play chess by beating us,” says Delfeayo.

Though he mostly keeps close to the New Orleans home he shares with Dolores, his wife of five decades, Ellis has recorded with each of his musical sons, and has his own observations about their differing paths to success. “It’s reflected in their learning styles, which are gonna dictate their work habits,” says Ellis. “For example, Wynton is left-brained, which is concrete, and Branford is right-brained, which is random/abstract. For the most part, we live in the kind of world that has more respect for left-brain activity, because it’s more easily documented and evaluated. You could teach totally left-brain, which is what a lot of musical departments do. But I’m right-brain, I don’t know how to teach like that. And Branford [a saxophonist who once led the Tonight Show band], is an improviser, primarily. Delfeayo is a good writer, and he functions from that left-brain side more than the right-brain side.”

“We all have our own thing, but there’s a [common] sound to it, and it comes back to my dad’s Nostalgic Impressions.”

Whatever their hemispheric differences, Delfeayo finds roots for his and his brother’s music in a particular song written by Ellis in the 1970s and recorded with Branford and Wynton on their Fathers and Sons album, for Columbia. “We all have our own thing, but there’s a [common] sound to it, and it comes back to my dad’s Nostalgic Impressions,” says Delfeayo. “It starts off with a bass vamp, and then the horns have a counterpart to the bass. Wynton, for a quintet, would write the trumpet and saxophone voices and voice everything around that, because that’s how he grew up, he heard that sound. And with Branford, on his Jubilo, which is my favorite piece of his, you can hear the same thing.”

Delfeayo also shares with Ellis a respect for classical training for jazz performers, as it’s integrated into the curricula of some New Orleans schools, but not everywhere else. “When I’m thinking about the development of music, many times I’m thinking about what I leaned in classical,” says Delfeayo, “because it takes a longer time to develop than your popular forms. I’m a big fan of opera and the idea of developing the motif, and I did wrote one song, for Branford, based on Beethoven’s Sixth [Symphony], but I haven’t recorded it yet.”

Both Branford and Wynton have performed and recorded classical material with orchestras, though they’ve received much more attention, fame, and financial reward for their jazz output . “There are lots of people who develop skills in both areas,” Ellis points out. “But the problem with their being side-by-side is, the certification of hiring music teachers in major institutions is 90 percent vertical.” He relates the dilemma of a student interested in jazz who wanted to study with a college’s principal classical piano instructor. “Why would you teach him, when he’s not even interested in learning the discipline of the music upon which your tenure and promotion are predicated?”

It’s no surprise that a disproportionate number of successful young jazz artists have come from the Marsalises’ hometown. “I think it’s the best learning town in the world,” boasts Ellis. “It’s still a town where, with a little imagination, you can put something together. And these kids get experiences which go beyond the campus. You got to prove yourself out there. And when they leave here and go to New York — what’s the big deal? It’s only more folks, more expense. But it is a chance to make more money.” Wynton is currently Lincoln Center’s artistic director for jazz and music director of the jazz orchestra.

Ellis and Delfeayo both have regular gigs at Snug Harbor on New Orleans’ Frenchmen Street, which has replaced the more touristy Bourbon Street as a site of vital jazz activity. Jason has been playing drums and vibraphone on gigs showcasing the sort of traditional jazz, popularly called Dixieland, which dates back a century to the era of Buddy Bolden, King Oliver, and the young Louis Armstrong. “If we had grown up in New York, a really fast-paced city and it’s really frantic all the time, I don’t think we would have had enough of a balance,” says Delfeayo.

He and the rest of the Marsalis offspring, and especially those close by, continue to count on their dad as a source of love and wisdom, musical and otherwise. “My dad has always been a real visionary, he always sees ahead of the times,” testifies Delfeayo. “Even with the liner notes for Southern Gentlemen, I could call him and say, ‘I need a word, Dad!’ He always has the great insights that the older people have.”