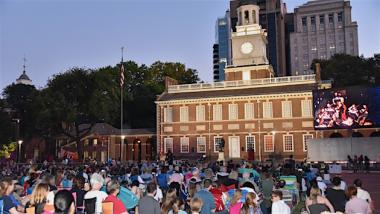 Opera Philadelphia: The HBO of the Opera World?

Ah, the age-old battle between programming operatic warhorses versus creating new repertoire. On the one hand, the former brings in the moolah and the crowds — on the other, new work can bring prestige and the chance for the art form to say something particularly relevant and meaningful in the 21st century.

“One of the problems with a new work is that quite a lot of it isn’t good,” said David B. Devan, general director and president of Opera Philadelphia, which, under Devan’s leadership, has become one of the more adventurous companies in America’s opera landscape. “Some of the new things we’ve produced haven’t been good.”

Devan is being modest. Many of the original works that Opera Philadelphia has commissioned or co-commissioned under his leadership (he took over as director in 2011) have been runaway, smash successes, works like Jennifer Higdon’s Cold Mountain, — which, it’s worth noting, outsold that year’s productions of La Traviata according to Devan — Breaking the Waves, by Missy Mazzoli, and last year’s We Shall Not be Moved, directed by famed dancer and choreographer Bill T. Jones. This is in addition to the successful new opera chamber series that began in 2009 and the new opera festival that began last year, O17. The second iteration of the annual festival, O18, begins Sept. 20.

“Our industry is hanging on by a thread to models that were created in the 50s–70s,” Devan said. “A subscription model focused on excellent performance in the traditional repertoire … This would be like ignoring the streaming movement and sticking to network television. We wanted to be the HBO of opera.”

In 2014, the Pew Charitable Trust awarder Opera Philadelphia a $500,000 grant to conduct market research, later supplemented by an additional $75,000 from the Barra Foundation. The research project is ongoing, but according to Devan, the topline takeaways are as follows:

“We learned that we can’t convert people into the consumers we want them to be,” he said, explaining that patrons interested in old opera typically aren’t excited by new opera and vice versa. “We can’t change their minds.”

So what’s a company to do then? This is clear: Diversify offerings. Cue last year’s critically acclaimed, season-opening festival, O17, which included three world-premieres (“edginess everywhere!” Devan chortled) and sold out many of the 31 performances spaced over 12 days. The festival attracted media attention from around the country as well as international outlets, turning Philadelphia into a destination city for operaphiles for the duration of the festival.

“It was just insane in the best possible way,” said Sarah Williams, Opera Philadelphia’s dedicated new works administrator. “Art is often a reaction to things going on in society and in politics at the time that it’s created. Good new art [has you] leaving the theater questioning what just happened and wanting to think about it more.”

Williams has been instrumental in programming We Shall Not Be Moved for this year’s annual free Opera on the Mall performance, which attracts thousands of viewers to the National Historic Park for an HD screening from the opera’s archives.

“This is the first year that we’ve done a new work on Opera on the Mall,” Williams said. “We typically do a bigger standard opera like Carmen, or Barber of Seville. We’ve had great success in building an audience this way. Now, we want to showcase one of our new works. More than 4,000 tickets have been reserved, and we’re set to go way beyond that number.”

Opera on the Mall was absorbed into the festival last year. This year’s festival, O18, runs from Sept. 20–30 and features two world premieres in addition to other performances: Lembit Beecher’s Sky on Swings and a collage collaboration curated and performed by countertenor Anthony Roth Costanzo, Glass Handel. Glass Handel’s three performances are completely sold out.

“We really look for artists who are visionary, that have something to say,” Williams said. “Anthony is a great example of someone who is visionary. We’ve had a relationship with him for many years.”

Years ago, Costanzo began working on an album that featured the music of both Philip Glass and Handel. “As a countertenor my bread and butter is before 1750 and after 1950,” Costanzo said. “Handel defined me; Glass changed me.” The album will be released a day before the first performance later this month on the Decca Gold label. The live performances will be multi-modal and feature live painting by artist George Condo, dance choreographed by Justin Peck, and videos by filmmakers including James Ivory, Maurizio Cattelan, Mark Romanek and more. As Costanzo sings, the other artists will respond to his performance in real time. Fashion house Calvin Klein has designed more than 500 pieces for the performance, from the artists to the musicians in the chamber orchestra to the extras. The production will go to National Sawdust (co-commissioner) in New York in November.

“I started to see Handel as a proto-minimalist in terms of form and large-scale harmonic structure,” Costanzo said. “They work well together.”

Costanzo described the live performance as a blend of a concert and art installation. The dance will be structured such that there is a 10-minute solo. Three dancers will move in canon; the dance remains the same but the music will shift underneath them, and they have license to interpret the music and respond. George Condo will paint a 16’ by 8’ canvas live in response to the music. And there are nine music videos being made, which will be screened live at the performance and released one-at-a-time weekly online when the album is released.

“We wanted to make music videos like pop videos but for classical music,” Costanzo said. “The whole point of this project is to reach new audiences.”

What about the little guy

While larger opera companies may have the resources to create a festival or separate line of performances for the new music-focused audience, many mid-sized to smaller companies do not. Devan cited Opera Omaha’s new festival (ONE) and Arizona Opera’s new series in alternative spaces as examples of (relatively) smaller companies taking initiative to perform new work.

“Smaller companies can try things like this, just scaled to their level,” Devan said. “Especially if you’re prepared to partner with non-opera folks. Eighteen percent of our audience for the O17 festival last year was age 29 and younger.”

Glass Handel’s menagerie of performance artists is a perfect example of these non-opera folks. Williams pointed to the quality of both new and standard works as remaining an essential factor in the success of a company: “There’s a lot of new work in this country,” she said. “A lot of companies — understandably so — don’t understand how big of a lift it takes to do something like this very, very well.”

“We don’t have it figured out,” Devan said. “We’re constantly trying to figure it out.  We’ve made some big gestures that are meaningful to many people, artists and audiences alike. But by no means is the experiment done. The inquiry continues because it has to.”

SFCV on the Scene at 'Opera in the Park'

The San Francisco Opera’s 9/11 commemorative event, Opera in the Park, was extraordinary, and SFCV is honored to have been a part of the day’s activities.