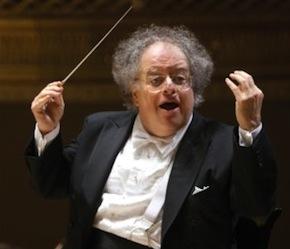 Passing the Baton: The Boston Symphony Enters the Post-Levine Era

As everyone knows, the Boston Symphony Orchestra is in period of transition. On Sept. 1, James Levine’s tenure as music director officially ended, although what turned out to be his final concerts with the orchestra, to date, were in January and the announcement of his resignation came in March. Now the search is on for a new music director.

Of course, every orchestra is always in a state of transition: An orchestra is a living organism that evolves as players retire, new players arrive, the repertory expands and changes, as music directors and guest conductors achieve, or fail to achieve, the mysterious symbiotic relationship with the musicians and with the public.

The hope was that James Levine, the BSO’s 16th (and first American) music director, would achieve a relationship with the BSO as symbiotic as his relationship with the orchestra of the Metropolitan Opera. And to an amazing extent he did, especially in the first two seasons of his six-season tenure. Unfortunately, each subsequent season brought serious medical setbacks, as well as triumphant returns to the podium after convalescence.

It all began when he tripped and fell onstage during the ovations after a concert in 2006, a fall that resulted in rotator cuff surgery and cancellations. 2008 brought the surgical removal of a malignant cyst on a kidney; the first of his several major back surgeries was in 2009. All of this aggravated ongoing neurological issues that resulted in involuntary motions that affected his ability to deliver clear signals of intent to his musicians. In his last two seasons in the post he cancelled more concerts than he conducted.

While [Levine] still stood at the summit of his musical powers, his body betrayed him.

These cancellations were frustrating to the orchestra players, to the management (which had to line up alternative schedules and replacement artists, often on short notice and under difficult conditions), and to the public, both in Boston and in tour cities. For Levine himself, of course, the situation was tragic and it remains so. Before the last five years, he rarely canceled a performance. He venerated the senior conductors of his youth and modeled himself on them, no doubt believing he would enjoy the same kind of long, Indian summer of afterglow achievement that they did. But while he still stood at the summit of his musical powers, his body betrayed him.

The issue of scheduling time between the BSO and the Met was never settled to the satisfaction of either employer, and a year ago the visibly struggling Levine found himself in the position of conducting a matinee performance and HD transmission of Das Rheingold in New York and a performance of Mahler’s mighty Symphony No. 2 in Boston that same evening. He did it, and the results were in both instances spectacular, but it must have come at a physical and psychological cost.

This drama unfolded in a surprisingly adversarial media atmosphere. Few of those who commented freely on the situation seemed to know how often such past BSO music directors as Serge Koussevitzky, Charles Munch, and William Steinberg canceled in their last years, and no one remembered the atmosphere of respect and support that surrounded the late careers of such ailing maestros of the past as Artur Rodzinski, Otto Klemperer, Bruno Walter, and George Szell. The situation became untenable, as everyone realized, so Levine resigned.

Thus, the BSO is currently undertaking its first real music director search in more than 40 years. The appointment of Seiji Ozawa in 1973 was the result of a search process — capped by Ozawa’s blazing performance of the suite from Bartók’s ballet The Miraculous Mandarin. There was no real search for Ozawa’s replacement: The BSO knew that Levine wanted the job and Levine knew the BSO wanted him. But he was two years into a five-year contract with the Munich Philharmonic that he did not want to break. This is why his appointment was announced in 2001 but did not take effect until 2004.

The conductor regretted hat he could not be sure that he could offer what the orchestra and public expected of him, and what he expected of himself. The BSO expressed regret in turn, and left open the possibility that one day he could return for special projects.

From the beginning he achieved a high artistic standard both in programming and in performance, and he did it consistently. Overall, Levine achieved a level of distinction with the orchestra unsurpassed in my half-century of personal experience with the BSO, 33 years of it reporting for The Boston Globe. Yes, there were moments when he counted on the players’ goodwill to carry him over a rough spot, but I never attended a concert that was musically compromised by his state of health. Today’s BSO is still very much the orchestra that Levine built, and guest conductors have often voiced their astonishment at the standard it displays at the first rehearsal.

From the beginning he achieved a high artistic standard both in programming and in performance.

(To say this it is not necessary to add, as so many commentators who were not present night after night routinely do, that Seiji Ozawa had “ruined” the orchestra and Levine saved it. Critics, sometimes including myself, may have carped at Ozawa, but over the years Ozawa grew even better at the things he started out being good at — Berlioz and other French music, 20th-century repertoire, and opera.)

Levine was both meticulous and patient in rehearsal. Earlier in his career, players complained that he talked too much, but in Boston he seldom went beyond observing, “If you do this, that will happen.” I always thought this came from his vast experience. But then a player in the orchestra he created at the Cleveland Institute of Music in the mid-1960s told me, “He was always like that.”

He requested a more flexible rehearsal schedule so that he would have adequate time to rehearse new works. This shift required extensive discussion and negotiation, but it was resolved — and continued to be adjusted after players complained that the workload of rehearsing and performing long, demanding programs was crushing. Levine made concessions.

He saw to it that the orchestra’s repertory had as wide a range as his own. Who else would think to program Varèse’s Amériques alongside Gershwin’s An American in Paris? America’s most famous Berlioz ensemble finally got around to playing the composer’s largest work, the opera Les Troyens, which Levine programmed both in Boston and at the Tanglewood Music Festival. He substantially expanded the BSO’s commissioning program, and friends on the board raised a $40 million fund to support his more expensive artistic initiatives.

He saw to it that the orchestra’s repertory had as wide a range as his own.

Above all, he made a real effort to be true to a promise he had made to himself as a young conductor: that one day he would make a major effort on behalf of music by living American composers, a goal he was unable to achieve in most of his previous posts. Not all of the public shared his taste for the music of Elliott Carter, Charles Wuorinen, Gunther Schuller, and others, and he was often criticized for not pushing for more new pieces from younger composers, but he answered that he wanted to be the one to commission career-crowning works by living older masters.

At Tanglewood, Levine was omnipresent during his first three seasons, not only doing his own things — which were a prodigious amount of work — but also attending just about every class and master class on the grounds when he wasn’t teaching himself. Needless to say, he was the brightest person in the room. Mark Volpe, BSO general director, said at that time his biggest job was to keep Levine from working 24/7. He is the best music teacher I have ever seen, and I have seen Nadia Boulanger and Leonard Bernstein in full flight.

It is unlikely that any of the conductors who have been holding the fort during the transition is a serious candidate for the music directorship. (Bernard Haitink holds the title of BSO conductor emeritus.) Prognosticators are therefore poring over the list of recent and current guest conductors. This season brings the belated and eagerly awaited BSO debut of Riccardo Chailly in two programs, for example. Andris Nelsons, who last March successfully took over a Mahler Ninth in Carnegie Hall on very short notice, makes his Symphony Hall debut this season.

There are also some interesting artists whose returns after long absences may be significant — Esa-Pekka Salonen, after an absence of more than two decades; Myung-Whun Chung, after 15 years; and Christoph Eschenbach, after 11. Stéphane Denève, who made his debut last season, is already back, an indication that the players must have found him interesting; he is also scheduled for Tanglewood next summer.

Next season’s programs, which have not yet been announced, will almost certainly add some other names to inspire speculation — after all, it has only been eight and a half months since Levine’s resignation, and many of these engagements must have been contracted before anyone knew for certain that the orchestra would be looking for a new music director.

Ludovic Morlot, who leads the orchestra in the programs in San Francisco, has joined the short list of BSO assistant conductors who have been invited to return after they have completed their tour of duty. And at 37 years old, he has an impressive list of assignments. Just this season, he began his tenure as music director at the Seattle Symphony. And next year he takes over as music director at Brussels’ famed La Monnaie Opera. He’s definitely a hot property, but at this point is not known to be a candidate for the job.

Whoever finally inherits Levine’s job will face an orchestra that has always been able to deliver anything a conductor asks of it. The orchestra is in great shape and the current interim period is in good hands. And in his performances with the orchestra, Ludovic Morlot will know what to ask.

Richard M. Dyer wrote about music for The Boston Globe for 33 years, 1973-2006, most of them as chief music critic. He has won the Deems Taylor/ ASCAP Award for Distinguished Music Criticism twice. He is now a lecturer and program annotator, and has served on the Van Cliburn Piano Competition jury three times