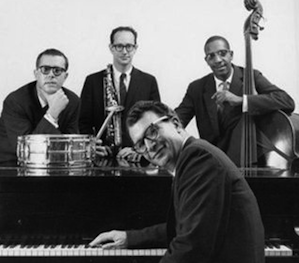 After more than six decades of generously sharing his unique performing and compositional talent, and a bright and ingenuous spirit, Dave Brubeck passed away on Dec. 5, 2012, after his heart failed. He was a day shy of his 92nd birthday.

He’s easily remembered as one of the first modern jazz artists to achieve popular fame (he made the cover of Time magazine in 1954) and to score on radio’s Top 40 charts (with his Quartet’s Take Five, in 1959). But Brubeck’s approach to jazz, including his early experimentation with alternate time signatures and polytonality, was informed by his training in, and affection for, classical music, and he continued to compose for the concert hall long after his crossover popularity had peaked. His keyboard technique was both commanding and tasteful.

Young Dave was raised in the Sierra foothills by Peter Brubeck, a rancher and rodeo-rider, and Elizabeth Ivey Brubeck, a pianist and music teacher who’d studied with Myra Hess and Henry Cowell. Three of their sons pursued music, with Dave, the youngest, graduating from the College of the Pacific, in Stockton, before being drafted and leading General George S. Patton’s army service band during World War II.

Following his discharge, Brubeck enrolled at Oakland’s Mills College, where Darius Milhaud taught him composition and gave him private lessons for free. “Milhaud demanded that you know what he called The Basic Rules of Bach,” Brubeck told me in an interview six years ago, during a visit to San Francisco. “But if you broke them, and it still made good sense, that was great.” In that spirit, Brubeck wrote a Fugue On Bach Themes, as a class exercise, and later recorded it with his Octet, comprised mostly of Milhaud students with a like-minded love of jazz.

Jimmy Lyons, one of the fans coming to Bay Area clubs to witness Brubeck’s group’s visionary originals and reimaginings of jazz and pop standards, started featuring the young pianist on his radio show. Architect Dave Thorne, another early fan, built a mid-century modern home for Brubeck and his wife Iola in the hills of Oakland’s Montclair District, where the couple started their family, and the Dave Brubeck Quartet, featuring alto saxophonist Paul Desmond, formulated their ground-breaking but popular recordings.

“With small children, it was a bit of a challenge keeping it quiet for Dave to work,” wife and mother Iola remembered. “But I think the fact that the music was there and around them all the time, as they got older and more interested in rehearsals, [the children] would hang around, and they saw people having fun playing.” Brubeck, who despite his powerful approach to the keyboard came to be associated with the so-called West Coast Cool Jazz movement, recalled shooting hoops behind his Montclair homestead with visiting trumpeter Miles Davis, whose Birth of the Cool had preceded his host’s hit album by a couple of years.

In 1960, the family relocated to southern Connecticut, to be nearer to the center of musical activity in New York, and engaged Thorne to create another bucolic place to live and work. The mathematics of architectural design had musician and architect conversing about blues forms, improvisation, and Bach. “People don’t understand, now, how related to Bach jazz was, up until free jazz,” Brubeck observed. “When you play like Art Tatum or Charlie Parker, within the 12-bar blues, you realize how great the gifted person can be within the most limiting kind of form.” As four of the six Brubeck children began mastering different instruments and forming bands, “the place sounded like a conservatory.” Visitors were invited to perform chamber music.

Over the next five decades, Brubeck made repeated returns (more than any other artist) to the Monterey Jazz Festival, which his fan and friend Jimmy Lyons had founded in 1958. The Quartet enjoyed world tours and a prolific contract with Columbia Records until 1967, at which time Brubeck formed another successful group with baritone saxophonist Gerry Mulligan. The pianist also recorded with the New York Philharmonic and began to compose concert works for chorus and orchestra, with Iola providing artful and lovely lyrics. In the 1970s, Brubeck started performing and recording with his four multi-instrumental sons, one of whom (Chris) has recently served as composer-in-residence with the Stockton Symphony Orchestra.

Throughout the rest of the 20th century and on into the next, Brubeck was practically unique among jazz-based artists at sustaining his performance and popularity, without hiatus. At the conclusion of our last interview, he and Iola revealed their intention to be buried on the road leading to Charles Ives’s farmhouse in Danbury, not far from their own home. “How did we make it, Oly?”, Brubeck asked his wife, reflecting on their prolonged partnered productivity. “I don’t know,” Iola responded, smiling. “Tenacity, I guess.”