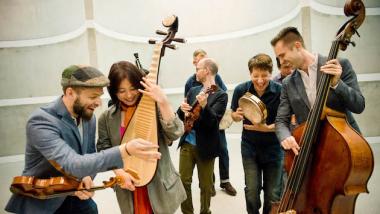 In a world filled with a legion of seemingly endless cultural and religious divisions and conflicts fueled by the ever-expanding networks of both real and fake news, it’s hard to remember the commonality that we do share. Artists have always sought new sources for inspiration, and the Silkroad Ensemble has been blurring and blending cultural boundaries successfully for two decades, driven by its maxim, “Music, radical cultural collaboration, and passion-driven learning for a more hopeful world.”

To celebrate its 20th year, Silkroad has created a major new multimedia work, “Heroes Take Their Stands,” comprising five original compositions based on heroic tales from different traditions, and created by a collaboration between pairs of culturally disparate artists: Pauchi Sasaki and Nomi Sasaki on Elektra; Kaoru Watanabe and Wu Man on June Snow; Colin Jacobsen and Aparna Ramaswamy on Ajruna’s Revelation; Jason Moran and Lucy Raven on Moderato 400; and Kayhan Kalhor and Hamid Rahmanian on The Price of Sorrows. The world premiere is on April 26 at the Granada Theater at UC Santa Barbara, and they will be bringing the piece, which was co-commissioned by Cal Performances, to Zellerbach Hall in Berkeley on Friday, May 3.

Silkroad was conceived in 1998 by cellist Yo-Yo Ma, who had the vision back then to see that cultural intercommunication and collaboration through music had endless possibilities. He boldly brought together a select group of musicians from the diverse cultures and traditions of the ancient Silk Road to create a revolutionary new musical and cross-cultural organization.Yo-Yo Ma stepped down as artistic director in 2017, and although he is still involved with the group, several co-artistic directors are now overseeing the organization. Forged by Yo-Yo Ma’s infectious spirit of collaboration, his enthusiasm continues to fuel the group.

“Yo-Yo is forever involved in a way, because a lot of his artistic DNA was seeded into our road and our mission,” says violist Nicholas Cords by telephone from Boston. He is one of the founding members and a current co-artistic director. “He led Silkroad down this path to be curious and engaged in cross-cultures in a sort of radical experiment of collaboration and listening.”

Another original member, violinist and composer Colin Jacobsen, agrees. “I think the overriding thing that drew us together and to Yo-Yo is the abiding sense of curiosity,” says Jacobsen by phone from New York. “He is very much the reason it exists and from early on he was so invested in giving us a push to find our voice within the group, and even more, within the world.”

Cords says that these days, they define it more as an artistic collective, rather than a member-based group; most of the musicians are busy with multiple projects and performances of their own. “We are trying to create a situation where artists of different experiences in the group can feel like they have agency within the creative collective.”

Bharatanatyam dancer Aparna Ramaswamy will be performing with Silkroad for the first time in “Heroes.” She believes one of the reasons Silkroad has flourished is due to mutual respect, both personally and culturally. “As a guest artist coming in, I feel so heard in every aspect that I’m involved in,” says Ramaswamy from Minneapolis where she co-directs the Ragamala Dance Company with her mother, Ranee. “It’s that respect for the cultures coming together and each distinct culture needing to be properly represented that is very important, and Silkroad does such a beautiful job of that.”

Ramaswamy collaborated with Jacobsen to create “Arjuna’s Revelation,” based on text from the ancient Sanskrit scripture, the Bhagavad Gita. They had known each other for years, and had been looking for a project to work on together. Jacobsen says he was very drawn to the story of Arjuna and Krishna. “That is an endless devotion, so I don’t claim to have more than nibbled on the root of the tradition,” says Jacobsen, “but I found things in this idea of rhythmic cycle and mode that spoke to me.” He explains that the scales he is using are related to the Indian Bhairavi mode, which he was told denotes heroism.

“It was a wonderful collaboration. Colin is so generous and so flexible and so prepared, it made it very easy,” says Ramaswamy. “He had certain parts of the music ready before our first meeting, so I could prepare choreography and lyrics and really work on the motions from that music. I am not just a choreographer, I’m a dancer, so I have to feel completely comfortable within the music. The melodies are very beautiful and powerful and the rhythmic structures are interesting. When I first listened to it, I liked it very much, and as I started to construct my own work within it, I became more and more at ease with it — it didn’t feel like I was working on Indian dance to western classical music, so I found it very easy for me to access as an artist.”

Jacobsen credits Silkroad with his desire to compose, perform, and collaborate cross-culturally. “I was very focused and in my tunnel-vision conservatory land of Julliard,” says Jacobsen, “but right after school I started working with Silkroad, and it was literally that sense of, ‘Oh my goodness, my ears are experiencing so much, I need to internalize this, and then I need to spit it out in a different way.’” He says that is still his operating principle today.

Cords has a similar background, and talked about his own process integrating himself into the diversity of Silkroad. “I was uniquely unprepared to do a lot of this work,” says Cords. “I went to Julliard and Curtis, two of the premier institutions for Western classical music in this country. Then I was thrust into this work with masters of traditions that I had never heard before. I spent a lot of years feeling like I was really outside of my comfort zone, and the feeling that I didn’t own a tradition, like Kayhan Kalhor from Iran or Wu Man from China. And one of the things that I learned was to have greater trust in owning my own tradition.”

Cords says he has come to reclaim his own tradition, and to more clearly be able to see the many links that do exist across borders. “Traditions are not something that develop in a vacuum or a silo,” says Cords. “European classical tradition was influenced by world traditions. It’s an incredibly porous world, and I am grateful that I’ve been able to redefine the tradition in a much broader sense.”

Although Silkroad has developed a strong following over these 20 years, Cords says there were some challenges in the beginning. “From a musical point of view, one of the things we faced from the beginning was skepticism,” says Cords, explaining that many people saw it as just another east-meets-west kind of gimmick. “We had a lot of growth we needed to do as a group,” he continues. “Silkroad is not about cultural appropriation, it is about creating a shared language together, and that actually took a while for us to discover for ourselves. If you dig down into the roots of cultures, you always find an incredible amount of influences from other cultures, and once you start peeling away the layers, you discover so many other things that you didn’t know. Those were realizations that happened along the way that I think kind of helped."

In addition to performing, in the past two years, Silkroad has been doing a “dizzying amount of work,” and spreading its gospel in a number of other ways. They have developed in-depth relationships with major educational institutions, including Harvard University and Rice University, where they gather to rehearse, and where they present arts and passion-driven learning and global musician workshops.

“That’s something that we keep plugging away at,” says Cords. “Doing more and more work, and not just being in the concert halls of the world, but going deep into residency work in different places. There’s a variety of ways that we are trying to reach more and more people.”

“We are in a world where there are so many conflicts in the world, like immigration and the refugee crisis,” he continues. “We live in a very fractured society, politically, and I think audiences are hungry, in a way, for this kind of work because it is an antidote to the news cycle.

I think there is incredible power to seeing two or more people working together in the realm of music or the arts, getting across the difference. It is a radical idea, and that can be a really powerful model.”

“There’s a visceral feeling that you get from art that you don’t get with other things,” says Ramaswamy, “and I think it’s so important for each of us, especially in this day, to be moved.”

Silkroad is still evolving. At the moment, they are seeking a new executive director, which will surely have an impact on the direction of the group going forward. But being on the cutting edge will always be the driving engine for this ever-expanding group of musicians, as well as trying to set an example and make a difference in the world.

“We want to create a more hopeful world in the process of what we do,” says Cords. “I think that is enormously inspiring, and even though it’s a daunting challenge, it’s one worth engaging in.”