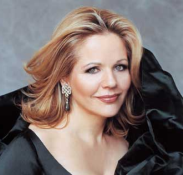 We should all follow Katharine Hepburn's advice:
"Life is to be lived. You had bloody well better find some way that is going to be interesting."
So for those of you whose existence is enhanced by live concerts, it's time to pass on to you some of the best offerings for the second half of the season, month by month.

The unavoidable, heavyweight event of the new year in Peninsula and South Bay concert-going is the opening of Stanford’s new, intimately-sized, acoustically cutting-edge Bing Concert Hall. The Jan. 11 gala features the San Francisco Symphony with Frederica von Stade and a host of Stanford groups, and an open house. Following concerts by the roots-rock group Los Lobos on the 12th, the hall’s first regular classical concert follows on the 13th. The St. Lawrence Quartet, Stanford resident artists, will play an unusual program including a quartet by their distinguished Canadian compatriot Murray Schafer, and will be joined by pianist Stephen Prutsman for a quintet by the late Romantic Austria Ludwig Thuille, friend and colleague of Richard Strauss. (David Bratman)

Symphony Silicon Valley is returning once more to the historical theatrical roots of its venue, the California Theatre in San Jose, with an all-Kurt Weill program on January 12-13. The orchestra, with James Holmes conducting, and Lisa Vroman as soprano soloist, will perform suites and medleys from Weill theatrical works from The Threepenny Opera of his Berlin days, through further works from his Paris years and his time on Broadway. (David Bratman)

Last year’s performance of J.S. Bach’s St. Matthew Passion by the American Bach Soloists was predictably one of the highlights of the spring season. Expect no less from Jeffrey Thomas’ brilliant forces in the St. John Passion this year, the shorter, gutsier telling of the Easter story. (Michael Zwiebach)

If you think the end of the 1812 Overture is grandiose, wait till you hear Hector Berlioz’s Te Deum. The composer himself exclaimed “The final movement surpasses all the enormities of which I have been guilty of up to now.” The San Francisco Symphony and Chorus, conducted by Charles Dutoit, perform in colossal mode, along with the Pacific Boychoir. Watch out for the trombones! (Jeff Dunn)

The parade of great violinists through the Bay Area this spring is longer than anyone but a dedicated (and wealthy) fan could compass entirely. But you won’t want to miss Hilary Hahn, who sails into San Francisco Performances with a couple of repertory warhorses and selections from her inspirational “encores” project. (Michael Zwiebach)

For something completely different, the Hamburg Ballet takes over Program 2 at the opera house with John Neumeier’s Nijinsky. From the home team’s season, the premiere of Christopher Wheeldon’s much-anticipated full-length Cinderella follows new ballets by Wayne McGregor and Alexei Ratmansky. (Janice Berman)

Pablo Heras-Casado’s mastery of contemporary-music idioms is perfect for the S.F. Symphony’s West Coast premiere of Magnus Lindberg's EXPO, which has been described as “a brash yet amiable mix of steely brass chorales, sparkling woodwind flurries, lush thickets of strings and eruptive percussion.” Stephen Hough will preside over the “other” Liszt piano concerto, no. 2, and Prokofiev’s Fifth Symphony concludes the evening.

San Jose’s biggest chamber music event of the season is a two-concert Beethoven quartet cycle by the Auryn Quartet, sponsored by the San Jose Chamber Music Society. The Auryn Quartet, from Germany, has won plaudits for its performances and recordings, including Beethoven and Haydn. (David Bratman)

Polish guitarist Marcin Dylla gave a brilliant and deeply poetic recital in April 2011 and his return to San Francisco is highly anticipated. Dylla's playing is characterized by sensuous tone, rhythmic flexibility, and deeply felt emotion and his programming is interesting, intelligent and original. (Scott Cmiel)

To her recital with pianist Vlad Iftinca, mezzo-soprano Leonard brings a voice I called “drop-dead gorgeous… ravishing” at her first SF Performances recital, in May 2008. Leonard was stronger on voice and technique than on interpretation the first time around; let’s see how she has matured in her five years of singing leading roles at the Met and other major houses. (Jason Victor Serinus)

Lara Downes and Build at the Mondavi Center

Lara Downes, artist-in-residence at the Mondavi Center for the Performing Arts, collaborates with the indie-classical/ indie rock band Build in a concert that blends some of their original instrumental pieces (created by composer Matt McBane) with classics by Chopin, Debussy, Bartok, and John Adams. Build also shows up, two days after, at the stonking fun Switchboard Festival (where the classics will be in shorter supply). (Michael Zwiebach)

March 23, Lara Downes and Build at the Mondavi Center

March is a good month for Anton Bruckner. Weeks after the San Francisco Symphony plays his gorgeous Seventh Symphony, the Berkeley Symphony, under the guiding hand of Joana Carneiro, will play his Fourth Symphony. Of more interest may be the other work on the program, Steven Stucky's The Stars and the Roses a song cycle sung by tenor Noah Stewart to the poetry of Nobel-prize winner Czesław Miłosz. (Jeff Dunn)

Meng Su and Yameng Wang are rapidly becoming California celebrities. Now in their second year as artists-in -residence for San Francisco Performances they have been building new audiences for the guitar with regular performances and classes in public schools and community centers throughout the Bay area. Their repertoire has an exciting world music flavor featuring composers like Brazil’s Sergio Assad and China’s Tan Dun as well as sensitive interpretations of Spanish classics and the music of J.S. Bach. The Duo repeats this concert a week later for the Sacramento Guitar Society. (Scott Cmiel)