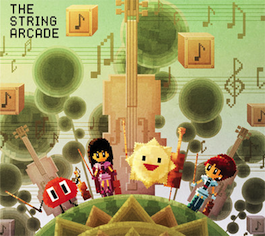 Think back to when you were a kid, and try to remember a melody that inspired you. If you’re old enough, you’ll remember how you or some kid you knew was learning to play the theme to Bonanza on the piano, or if you’re a bit younger than that, learning to play the Star Wars theme on synthesizer, or, more recently, picking out the notes of the Harry Potter movie theme. Melodies that are familiar to kids and all their friends offer a kind of instant celebrity by association, and children are drawn to re-creating them. At least that’s what Dren McDonald hopes is the case.

McDonald, the composer behind the “The String Arcade,” has brought together violinists Philip Brezina, Celia Harris, and Alisa Rose with violist Emily Onderdonk and cellist Robin Reynolds in his own arrangements of songs from video games dating from the 1980s to the present day, in a way that he hopes sheds new light on the music.

“I didn’t want to do just straight transcriptions,” said McDonald, who works in the games industry. “I wanted to do interpretations, so I chose some songs I could play with a little, some made [completely] with synthesizers. I knew by choosing to do them with string instruments we’d have to find a way to make it interesting without doing what a synthesizer could do. It left a lot of room to open up the arrangements and have our own personality in there. Including songs that we’re used to hearing come out of a tiny chip, so it changes the context.”

The Alameda Music Project will be the recipient of 100% of the project’s proceeds, making use of the funds to support a music project for children, which was launched this month with the founding of a choir at Maya Lin School on Feb. 3. The K–5 after-school project will begin in autumn 2014 with the mission “to provide an opportunity where all children — regardless of circumstances — can thrive socially and academically through music education that promotes creative expression, teamwork, discipline, and social responsibility.” The program will be tuition-free.

His intention also was that the project could and would stand on its own musical merits, whether or not a potential listener is familiar with the music from other sources.

McDonald, whose compositions for video games include work for Ghost Recon Commander and Ravenwood Fair, is also a parent in Alameda. He says that he “knew that we’d get support from the game industry because the gaming industry is very supportive, and that turned out to be the case. So far we’ve had really nice support from the gaming community. We also chose game music because my kids are really into Minecraft and Plants vs. Zombies and we thought by including music from these games [played on real instruments] it would help inspire the kids to play music.” He adds that his intention also was that the project could and would stand on its own musical merits, whether or not a potential listener is familiar with the music from other sources. The string players involved have performed with various ensembles over the years, being de facto members of what’s known as the Freeway Philharmonic, playing for Clubfoot Orchestra, The Real Vocal String Quartet, Quartet San Francisco, Shotgun Wedding Hip Hop Orchestra, and the San Francisco Opera and San Francisco Symphony. 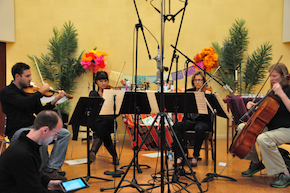 McDonald is joined on the project by another composer, Jason Poss, whose credits include editing work on the Lord of the Rings film trilogy and orchestration for World of Warcraft: Wrath of the Lich King.

After the success of Venezuela’s Youth Orchestra program, there’s nothing farfetched about inspiring kids to pick up classical instruments by unusual means.

The repertoire for the CD runs the gamut from video games’ early days, such as Tron, to more recent blockbusters including Portal 2 and Minecraft. The CD is available now.

And, in addition to the CD, a performance event will take place on March 7 at Rhythmix Cultural Works in Alameda. The evening will include a live performance by String Arcade, while the event itself will provide two rooms of video games from old-timers like Sega Genesis to “several indie game studios bringing their brand-new games to share with you,” says Rhythmix Cultural Works. All proceeds from this event will benefit AMP, as well.

After the success of Venezuela’s Youth Orchestra program, there’s nothing farfetched about inspiring kids to pick up classical instruments by unusual means. As the saying goes in the theater, “You need to get the butts in the seats!” Perhaps the next Gustavo Dudamel is waiting to begin his path to musical greatness, all because he wants to go over to Rythmix Cultural Works on March 7 and play a round of Scurvy Scallywags. Dren McDonald, and music lovers of tomorrow, can certainly hope so.

Amina Edris Comes Into Her Own With Cleopatra