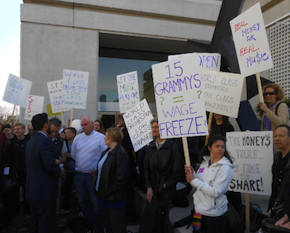 After a 12-hour negotiating session that ended at 4 a.m. on Friday, the strike called by musicians of the San Francisco Symphony on Wednesday, continues.

Tonight's SFS concert is cancelled by management, but there are some signs of hope that a resolution may be on the horizon. Both Dave Gaudry, spokesman for the Players' Committe, and Oliver Theil, SFS communications director, said on the Friday morning KQED radio program Forum that negotiations will continue today, and both expressed cautious optimism.

Theil disclosed after the radio interview that management has made changes in its offer both for compensation and health care. "Things are moving forward," Theil said. "Progress is being made."

Robert Mnookin, chair of the Harvard Negotiation Research Project, and a participant in the 1996-1997 SFS strike settlement, compared the situation to deadlocks in Washington, and warned against "playing chicken," while courting disaster.

Most responses on radio and the internet express surprise and disgruntlement as to why the Symphony at its zenith and the well-compensated musicians are going to the brink, unable or unwilling to settle issues in negotiations, which have lasted eight months.

Calling the situation a conflict among "a bunch of deserving winners," arts consultant Drew McManus, of the orchestra business blog Adaptristation, reports on the strike in terms of everything going well in San Francisco, everybody benefitting. But then it's all going to the brink (or, in today's parlance, the cliff, financial or otherwise):

There’s no good way to begin a work stoppage but the recent one at the San Francisco Symphony is starting off as a text book example for how stakeholders should never approach something like this ... Why on earth did all of these stakeholders decide to snatch defeat from the jaws of victory and end up at a point where the best course of action was to take public a fight over who among them gets a larger fork-full of a growing pie amidst an economic downturn? Tell me ladies and gentlemen of the SFS (and to be clear here I mean the Board, executive leadership, and musicians), how exactly do you think this will work out for you?

Here are some of the main issues, as far as information can be found in the always-secretive business of contract negotiations: 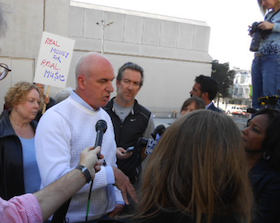 Until last night, there was no change in the standing Symphony offer, which the musicians have declared unacceptable: a wage freeze in the first year, and 1% increase of base salary in each of the following two years. That would raise today's $141,700 base salary to $144,560 by the end of the three-year contract.

Friday afternoon, Theil told SFCV that "the most recent negotiation yesterday did reflect changes in our offer, both on issues of compensation and health care."

The musicians originally asked for a 5% increase per year, dropping the demand down to 4% per year. The total cost of the payraise for 103 orchestra members would be $1.75 million for the life of the contract which, in turn, management is unlikely to accept.

Taking into consideration media fees, overtime, and bonus payments for principal chairs above base pay, the current average (not median) compensation is $165,000, as reported by management. 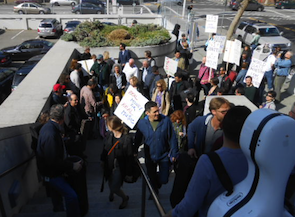 One of the musicians' main complaints is that management withholds fiscal information, which could support their claim that the Symphony has sufficient resources to provide higher pay: "Management continues to stall negotiations and refuses to open its financial books so that we can reach a fair deal that will allow us to remain one of the best orchestras in the world."

Management counters with the claim that it "responded to all of the union’s specific requests for information in a timely manner throughout the negotiations. Since September, this has included over 50 formal requests for which were delivered over 500 pages of documentation."

The knob of the problem is that the musicians want current information and they get only figures relating to the past because no unaudited information can be released — a general standard. Still, when the question is how to share slices of a pie, the size of the pie is important, so the dispute about disclosure continues.

Concerning the key issue of deficit, the Symphony has stated only that the past four seasons all had a deficit. Also about the past four years: "While concert and related revenues have increased 2.4% compounded annually, concert production expenses have increased 8.1% compounded annually." There are unconfirmed signs that the current operating budget also includes a deficit, but that's just speculation.

An undisputed item is that musicians have 10 weeks of paid vacation per year, and paid sick leave. The issue is over health care.

The Symphony states that "With the rising cost of health care, SFS administration proposed health care plan changes, but still offered a health care plan option with no monthly contribution for individual musicians. The latest proposal also maintained a maximum $74,000 annual pension for retiring musicians, with a slight increase in retirement age to draw full pensions."

The musicians claim that changes would cost them $2 million under changed rules. There are no specifics from either side.

The musicians object that despite the complainte management has received "salary increases substantially greater than provided for musicians; has developed plans to embark on a major redesign and renovation of the Davies Symphony Hall at a cost of up to a half billion dollars; and has increased the budget $11 million over last year for a Centennial Celebration party — while demanding a wage freeze and calling for increasing the costs to be borne by the musicians, including pension reductions."

With an endowment that has increased in value by 83% over the last ten years and currently — with stock market records — approaching $300 million, the San Francisco Symphony has the second largest endowment of any symphony in the country. 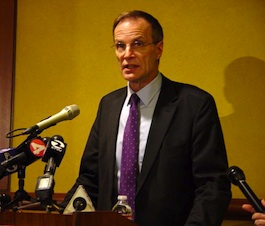 On Thursday, more than a year in advance of the San Francisco Opera Orchestra contract's expiration, the company released audited financial results for the 2011–2012 season (FY12), showing a deficit of $1.56 million on an operating budget of $70 million. The company began FY12 with a Board-approved budget deficit of $3.2 million, but during the course of the season improved upon the authorized financial shortfall.

Despite the company’s best attempts, says the announcement," at implementing stringent and difficult cost-savings reductions that totaled more than $1.7 million, combined with robust fund raising and ticket sales campaigns, San Francisco Opera ended the season with a deficit," for the third consecutive season.

It’s never pleasant to report a deficit, especially after so much hard work reducing expenses and monitoring every line item in the Company budget while at the same time making record strides in our fundraising campaign and selling a great deal of tickets.

Steps will continue to be taken over the next three seasons to continue to reduce expenses across all Company departments, increase our ticket sales and annual contributions and augment the endowment. There is no question that in order to achieve a sustainable balance, it will require the active participation of all sectors of the organization.

Herbert, who came from MTT's New World Symphony training orchestra, acknowledges "the incredible opportunity and privilege" to serve as principal timpani of SFS, but goes on to say:

Herbert complained about the lack of practice space to accommodate his instruments. He detailed how he was forced to rent his own practice area and furnish it with extra instruments. Both Herbert and management agreed that negotiations with him have gone on for about seven months.

In press releases and prominently featured on the musicians' website, Herbert writes:

I will always admire and respect the musicians of the San Francisco Symphony and our music director, Michael Tilson Thomas, but as an artist and as an employee I want to be in a workplace where I am valued and supported by management, and where I am considered an asset rather than an inconvenience.

It's unfortunate that David feels that he was not valued and supported as an artist at the SFS. He is very talented member of the orchestra and when he showed interest in the CSO [Chicago Symphony] position was offered sizeable additional salary and longevity bonus to stay in San Francisco, on top of his current salary of $214,000. To underscore our support for David, he also receives 16 weeks paid vacation a year, six more than most musicians, to pursue personal artistic projects important to him as we greatly value our musicians' varied artistic interests outside of Davies Symphony Hall as members of our vibrant arts community.

In an analysis of the ongoing management-orchestra wars around the country, Adaptistration's Drew McManus wrote about musicians' concern about matters other than money by quoting from a study: "... orchestra musicians’ internal motivation is higher than any of the other groups studied, but their level of general job satisfaction is quite low, below that of federal prison guards ..."

Feeling lack of control is a major contributor to stress: "Although it’s a bit of an oversimplification, [the study's authors] contribute a lack of control in the musician’s workplace, both artistic and not, as the primary source for this problem ... So what’s one consequence for when musicians don’t have the amount of control they need? They find other avenues to subsidize this dissatisfaction, such as demanding higher compensation."

At the musicians' request, SFS has established a chamber music series, being programmed by and featuring the musicians individually. In addition, the next season will have numerous orchestra musicians in solo assignments.