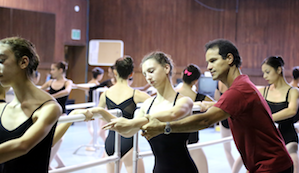 The all-expenses-paid tour was brokered by Ardani Artists Management with BSJ Artistic Director José Manuel Carreño, friend and sometime colleague of the Russian stars. Publications including this one trumpeted the tour.

But it never happened. The press was not informed of the cancellation, perhaps because there was no one around to tell them.

It was a sorry conclusion to a 2013-2014 Ballet San Jose season full of artistic success and money woes, illuminated by the company’s decision to cancel live music for the 2013 season opener and also eliminate Saturday matinees, the worst box-office draw.

Then last May, Stephanie Ziesel, who as executive director was tasked with fund-raising, departed with the company’s thanks but without explanation, followed in short order by the publicist, Scott Horton. The two job vacancies were filled during the summer, but neither Greg Parry, the new director of marketing and public relations, nor Alan Hineline, succeeding Ziesel with the title of CEO, assumed their duties until late August.

Last week, Parry offered an explanation for the grand tour’s cancellation. “There was a falling-out over where Carmen was going to appear on the program,” Parry said last Thursday, explaining that the presenter insisted that it should close the show, which didn’t work for the artists. Parry added that there is no quarrel between BSJ and Ardani. “We’re hoping it might happen next summer.”

Between now and then, it’s obvious that a lot more has to happen. Much of it centers around getting Ballet San Jose’s financial house in order by cutting this year’s budget. It’s just shy of $5 million, 20 percent lower than last year’s, and to achieve the reduction, stern measures are in the works.

The Nutcracker, the December cash cow of ballet companies everywhere, will be performed without live music, a blow to Symphony Silicon Valley, which has played for BSJ for many years, as well as to audiences. In fact, post-Nutcracker, the new season will include that orchestra for just one of the season’s three productions, the first. The SSV is to play for Jerome Robbins’ Fancy Free (a company premiere) as well as George Balanchine’s Theme and Variations. The second show, Bodies of Technology, centers on the interplay of technology and art, with world premieres by choreographers Yuri Zhukov and Amy Siewert. For those, the company is trying to get grants to hire a few musicians, including a theramin player. The third piece, Jessica Lang’s Eighty One, is recorded. The final progam of the season is Ben Stevenson’s Cinderella, also on recording, which premiered at Ballet San Jose in 2012. It’s a net loss of one program compared to last year.

The company is also seeking an extension for this season only from the dancers’ union, the American Guild of Musical Artists (AGMA), to allow Ballet San Jose not to hire replacements for three dancers who have already left the company. E-mail ballots on the matter have been sent to the 30 dancers and two apprentices. Whether the dancers pass the extension or not, they will come back to work Sept. 16, beginning the second and final year of their current contract.

“It’s a one-time thing, to support the company until they get back on their feet in addressing the financial challenge,” said Nora Heiber, AGMA’s national dance representative. Heiber sounded optimistic that the arrival of Hineline as CEO spells an end to the “bad blood” that she said had existed during the shift from Ballet San Jose Co-Founder and Artistic Director Dennis Nahat, dismissed by the company in 2011, to and through Ziesel’s tenure. “There’s been a big effort ... and the feeling has been positive so far,” Heiber said. “It feels as if now grownups are in charge of the ship. I’m hoping it lasts.”

What will stay in place is the American Ballet Theatre National Training Curriculum at Ballet San Jose School, the feeder for the company as well as for other companies and university dance departments. Dalia Rawson, Ballet San Jose School director, praised the program for its cohesiveness and high standards, and noted that in 2013 and 2014 the 200 students had a 99 percent pass rate with ABT’s board of examiners. Broadening the school’s reach, this summer’s intensive program offered dorm housing for students for the first time, and Ballet San Jose Artistic Director José Manuel Carreño, a former ABT superstar, taught and coached for much of the summer. There is also a male dancer training initiative in Carreño’s name. The value of the curriculum and coaching is self-evident in the company, which has improved across the board since his arrival.

Alan Hineline has taken the title Chief Executive Officer with a purpose, he said last week: To remind everyone that an arts organization that doesn’t take itself seriously as a business is doomed to failure. “You have to meet a bottom line to be sustaining and vital,” he said.

A former dancer, choreographer and dance teacher, Hineline spent five years as CEO at the nationally known Central Pennsylvania Youth Ballet, where he significantly broadened the school’s scope and budget. His hiring was part of a three-year strategic plan laid out by arts consultant Michael Kaiser. Kaiser spent nine years as president of the John F. Kennedy Center for the Performing Arts and is well known as a savior of arts organizations, the Alvin Ailey American Dance Theater among them. Hineline said he didn’t know what Kaiser charged Ballet San Jose, but said he was always “generous.”

Hineline hopes to engage the tech community and the younger community “on a personal level, with our organization and our dancers ... It’s such a powerful tool. You have them see the real humanity of our art form. I’ve rarely seen that not work.”

Key to saving the company is widening its list of major supporters. Electronics tycoon John Fry, who for years gave millions — one report pegged the total at $14 million — to the company, has stepped back, although he continues to provide a building he owns to Ballet San Jose in downtown San Jose for its offices and studios at a vastly reduced rental. “He is not currently scheduled to give money in this season. I can’t tell you if that will or will not change,” said Hineline.

“We have laid out development initiatives with specific goals to be able to end the season in a positive way financially. We are working day and night to put those foundations in place.” There are two specific ones, he said. “One is a match, and one is a one-year development campaign that is going to be led by a prominent figure here in San Jose.”

These are in accord with Kaiser’s plan, he said, which includes steps to make the company more relevant to the community. Thus the Bodies of Technology show. “I see it as a program that uses dance to answer some of the questions about technology, and technology to answer some of the questions about dance.” He hopes to engage the tech community and the younger community “on a personal level, with our organization and our dancers,” building audiences by getting them into the studio to watch the process of class and rehearsal. “It’s such a powerful tool. You have them see the real humanity of our art form. I’ve rarely seen that not work,” Hineline said.

He also believes in tailoring the benefits of sponsorship to match the donor, he said. “To build stronger relationships with a corporation, you have to align yourself with their interests,” he said, asking them, “What interests you about the ballet? If it’s fulfilling corporate responsibility requirements, or marketing, that’s what we’ll do.”

Hineline said he’s not happy about canceling the live music. “We’re just looking at the numbers, and that’s what we have to do this year. It pains me greatly. We’ll miss the musicians. I don’t want to imply, in any way, that we don’t regard live music as an important component of dance.” He sees the moneysaving moves as a short-term strategy lasting two years, which jibes with Michael Kaiser’s master plan.

“We’re becoming as careful as we can,” he said, “so we don’t become another sad story about the arts in Silicon Valley.”