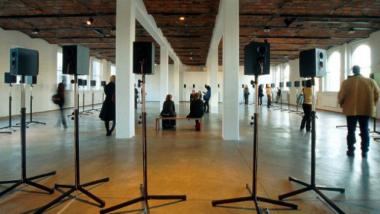 Thomas Tallis's 16th-century motet "Spem in alium nunquam habui" (I have never placed my hope in any other [but you]) is the basis for Janet Cardiff’s immersive sound installation, The Forty-Part Motet, by the San Francisco Museum of Modern Art, opening on Nov. 14 for a two-month run.

The venue is the newly renovated Gallery 308 of the Fort Mason Center for Arts + Culture; admission is free, but reservations are recommended because of the anticipated demand and the gallery's limited capacity. The presentation also marks the final SFMOMA On the Go exhibition series before programming resumes in the expanded museum next spring.

Tallis' masterpiece, a 40-part Renaissance motet for eight choirs of five voices each, has been recorded by a choir in Salisbury Cathedral, close-miking each singer to isolate distinct musical lines and individual voice coloration, and Cardiff produced a 14-minute loop that includes 11 minutes of singing and three minutes of intermission.

Individually recorded parts are projected through 40 speakers arranged inward in an oval formation, allowing visitors to walk throughout the installation, listening to individual voices along with the whole. Cardiff’s layering of voices creates an emotionally evocative sound sculpture, described as intimate, even within a public space.

During a three-minute intermission, the audience’s own voices and other noises in the environment of the installation mingle with pre-recorded sounds of the choir’s banter among themselves. "Cardiff’s address of the audience as a single person, free to move on stage, is part of what makes her work so emotionally intense,” says Rudolf Frieling, SFMOMA's curator of media arts.

Edited in a complex process and played back in unison as a 14-minute loop, Cardiff’s reworking of Tallis’ music is transporting. As viewers wend through the soundscape, each individual path brings out one voice more clearly than another. When listening to a concert in a traditional theater setting, we normally experience music as a frontal wall of sound. But imagine being an invisible presence amid the live performers, able to wander among them and eavesdrop on each one individually or bask in the center of the stage, completely enveloped by the performance in real time.

Janet Cardiff shapes space acoustically in order to create a sculptural rendering of sound that allows viewers to climb inside one of the most sublime pieces of music ever written, lauded as "achingly beautiful" in the New Yorker and "transcendent" in the New York Times.

Press up close to a single speaker for an intimate experience. Stand in the center of the installation and be encircled by voices, with volleys between the soprano, alto, tenor, and bass sections of the choir surging on all sides.