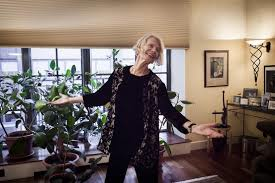 Given a lifetime admiration for George Balanchine — which started in New York and at the world premieres of Agon, Gounod Symphony, Stars and Stripes, and literally dozens of his other masterpieces, seen from the very top of the bane-of-acrophobics City Center — I was vaguely aware of Balanchine's quaint preference for the humble and durable rubber plant.

Memories came rushing back on Monday when the story hit the front page of The Wall Street Journal:

It is tradition for ballerinas to be handed bouquets of roses after a big night, but for some dancers, the most meaningful flora is the Ficus elastica, aka rubber plant.

Neither rare nor fancy, rubber plants produce no colorful blossoms. They require no meticulous attention or lighting. A sizable one costs only about $15. But the humble foliage can signify a hard-earned connection to an elite coterie if it comes from “the Balanchine plant.”

George Balanchine, the choreographer who co-founded New York City Ballet and the School of American Ballet, is considered by many to be one of the 20th century’s most influential artists, transforming the centuries-old art form by infusing it with faster, more athletic motion.

The story of the original Balanchine plant sparks debate, but what is certain is that the guardian of the greenery is Karin von Aroldingen, a City Ballet dancer from 1962 to 1984 and a glamorous star of her day.

Regardless of ballet memories, the easiest plants — and even better-looking than rubber plants — in apartment living are Pothos (can't kill it, except with overwatering), jade and ice plants, Diffenbachia, and all kinds of ficus.