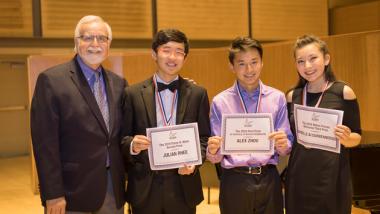 For the second year in a row, first prize in the Irving M. Klein International String Competition has gone to a Bay Area native. Alex Zhou, a 16-year-old violinist studying under Zhao Wei in the San Francisco Conservatory of Music’s Pre-College Division, took home the gold this past Sunday, with a program of Bach, Mozart, and Tchaikovsky. Violinists Julian Rhee (17, student of Almita Vamos, Music Institute of Chicago) and Isabelle Ai Durrenberger (19, student of Jaime Laredo, Cleveland Institute of Music) took second and third prizes, respectively.

Now in its 33rd year, the Klein Competition is held annually in San Francisco and is open to young string musicians age 15 to 23. Past winners include Tessa Lark, Jennifer Koh, Frank Huang, and Mark Kosower. The eight-man jury for this year’s competition comprised — among others — Glenn Dicterow, Karen Dreyfus, Ian Swensen, and composer David Froom, whose commissioned work was a required piece for competitors.

In addition to a substantial cash prize of $13,000, Zhou takes home two local concerto engagements with the Peninsula and Santa Cruz Symphonies. Rhee’s second prize consists of $6,300 and a solo performance with the San Jose Chamber Orchestra, though he was awarded the Best Performance of the Commissioned Work, as well as the Pablo Casals Prize for the best performance of a solo Bach work. Durrenberger’s cash prize comes in at $2,500 and is given by David and Judy Anderson in memory of Judy’s father, Milton Preves, former principal violist of the Chicago Symphony.

Reflecting on this year’s batch of competitors, Competition Co-Founder and Artistic Director Mitchell Sardou Klein said, “The level of performance, poise, and deeply expressive artistry was beyond impressive. My father, Irving M. Klein, would be proud to see the continuously extraordinary performances [given] by such remarkable young people throughout the past 33 years.”

Verdi Chorus Comes Together as a Community

Wild Up Brings It Home