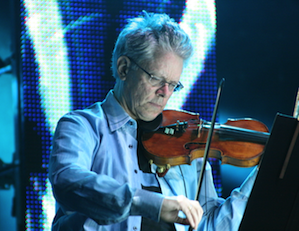 An extreme example, but indicative of the perils musicians face: Years ago, David Harrington was in rehearsals with the Kronos Quartet, preparing to play Morton Feldman's String Quartet No. 2 at Lincoln Center. The work runs six hours without intermission, and the Kronos had performed it eight times already, but something was different this time:

Pain started shooting up and down his arm 40 minutes into rehearsal. It grew more and more alarming. "Finally, after several hours of rehearsal, the pain was excruciating," Harrington said. "We ended up canceling this last and most famous venue for the work."

The story — one among many about torn rotator cuffs, hernias, hearing problems, exploded neck vertebrae, and lower spine problems — is part of Donna Perlmutter's Los Angeles Times account of the many hardships professional musicians face:

So you think classical music is purely a rarefied pursuit, where all that matters is creativity, spirit and soul? The musician's body does not agree. Not midway through a high-powered symphony. Not sitting near the crashing cymbals in Tchaikovsky's 1812 Overture. Not during the long haul of Wagner's Ring cycle.

As with so many other musicians, Harrington found himself afflicted with a literally show-stopping physical handicap. Luckily for him, the condition was temporary. He could go back to his calling: playing music that demands the utmost precision, fluency, coordination, and endurance and doing so with an Olympian level of artistry.

Not everyone is so fortunate. A trumpeter in Los Angeles once ended up with lockjaw and had to withdraw from the Philharmonic. A number of pianists have developed carpal tunnel syndrome that has severely interrupted their careers.

"Elite athletes of the small muscles" is how cellist Janet Horvath refers to her fellow musicians. Unlike athletes who are likely to work 10 to 15 years, musicians boast long careers, so their bodies must toil for decades, with a regimen of practice, rehearsals and performances, often for more than 10 hours a day. As with cars, human parts wear out. And repetitive motion with tensed muscles and held positions takes a huge toll on the body.

Even a young pro such as L.A. Phil music director Gustavo Dudamel is not immune, sustaining, in a wildly exuberant flourish, a neck/shoulder injury a few years ago. Famous pianists such as Leon Fleisher and Gary Graffman have grabbed headlines with their agonizing hand disabilities, their attempted surgical repairs and eventual recoveries.