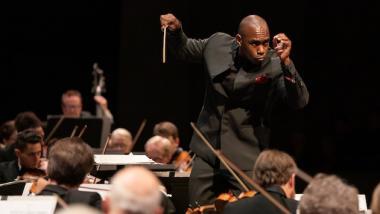 True to its path-breaking history, Berkeley Symphony’s 2019-2020 season, the orchestra’s 49th, will feature two world premieres and five works heard for the first time in the Bay Area.

Joseph Young will lead his first season as music director, conducting world premieres by Chinese composer Xi Wang and Los Angeles-based composer Derrick Spiva Jr. and the Bay Area premieres of Bryce Dessner’s Voy a Dormir, featuring the return of mezzo soprano Kelley O’Connor, and Mary Kouyoumdjian’s Become Who I Am, in collaboration with the San Francisco Girls Chorus.

Even with a matter of weeks between Young’s appointment and the announcement of the season, the new music director had a major role in programming.

As he told SFCV, “It was very much a collaborative process between myself and René Mandel who serves as both executive and artistic director. The canvas for the season had plenty of room for me to place repertoire and ideas that I believe in."

“It gives me enormous pleasure to lead Berkeley Symphony into a new era, beginning with an exciting season that builds upon a storied history of adventurous and unique programming. This season celebrates the work of diverse living composers of our time, many with close connections to the Bay Area.”

The season opens on Oct. 24, with former UC Berkeley Professor Olly Wilson’s Shango Memory; the return of Conrad Tao as soloist in Ravel’s Piano Concerto in G Major; and as part of the upcoming global celebrations of Beethoven’s 250th birthday, his Symphony No. 5 in C Minor.

“I wanted to ensure that every program had a connection with Berkeley,” says Young. “The example here is Olly Wilson’s Shango Memory. I wish I had the opportunity to meet a few African American composers during their lifetime, such as George Walker, Julius Eastman, and Olly Wilson. With Olly’s connection to Berkeley, this serves as a fitting celebration.”

Wilson’s work is inspired by the Yoruban god of thunder and lightning. With a rich musical background that included jazz and orchestral performance, electronic media, and academic studies of African music, Wilson wrote a large body of works performed by orchestras all over the world including the New York Philharmonic, Royal Concertgebouw Orchestra, and Moscow Philharmonic. He served as professor of music at UC Berkeley from 1970 until his retirement in 2002.

The season’s second concert in UC Berkeley’s Zellerbach Hall, UC Berkeley will offer the introductory performance of Xi Wang’s yet-unnamed work. It is a League of American Orchestras Women Composers Commission, supported by the Virginia B. Toulmin Foundation.

Bryce Dessner’s 2018 Voy a Dormir is based on texts from the poetry of Argentinian feminist author Alfonsina Storni (1892-1938). Dessner’s score for The Revenant was nominated for a Golden Globe. The other Bay Area premiere on the program features the return of the San Francisco Girls Chorus in a performance of Kouyoumdjian’s Become Who I Am. The work by the Armenian-American composer commemorates the 19th Amendment and Voting Rights Act. Concluding the evening is Brahms’s Symphony No. 1 in C Minor, Op. 68.

On the March 26 program, Schuller’s Journey into Jazz and Zimmermann’s Trumpet Concerto are both steeped in jazz tradition and compositional style. The soloist is Sean Jones, of the SFJAZZ collective, formerly with Jazz at Lincoln Center Orchestra and lead trumpet with Wynton Marsalis.

Gershwin’s An American in Paris rounds out the program, prompting this comment from Young: “The work has become synonymous with the 1951 film, but I focus on Gershwin’s attempt to be taken seriously as an orchestral composer besides his works for piano.

“By making the most of the full range of the orchestra’s palette, he set out to show everyone what he could do with a new set of ears and a fresh, new perspective.”

The Berkeley Symphony season concludes on May 14, 2020, with a program BSO says is “in support of celebrating the human spirit and the pursuit of mutual understanding as a pathway to peace.”

Spiva’s world premiere work uses a diverse combination of musical styles and influences, exploring “the layers of intersecting identities as individuals and collective groups, and illustrating the celebration of these differences while still finding common ground.”

British composer Roxanna Panufnik’s Three Paths to Peace combines Christian, Jewish, and Islamic music traditions to tell the story of Abraham and Isaac. The final work on the program is Prokofiev’s Symphony No. 5 in B-Flat Major, of which the composer wrote, “I conceived of it as glorifying the grandeur of the human spirit ... praising the free and happy man --- his strength, generosity, and the purity of his soul.”

“The season ends with the same energy and connection that I had with the musicians during my debut,” says Young. “Prokofiev’s Symphony is a showpiece for orchestra and embodies the complete human condition.”

Berkeley Symphony Chamber Series continues with five intimate concerts presented on Sunday afternoons at the Piedmont Center on Sept. 22, Nov. 3, Jan. 19, 2020, March 15, and April 19. These concerts showcase members of the orchestra alongside guest artists from the Bay Area in a selection of works for small ensemble from classical and contemporary repertoire. Full repertoire will be announced at a later date.

Subscriptions to the Symphonic Series are on sale now. Four concert subscriptions range from $49 to $288 and can be purchased by calling the box office at (510) 841-2800 or at the BSO website. Single tickets range in price from $15 to $96 and will go on sale Aug. 1. Discounted $10 single tickets are available for students with a valid ID.

Subscriptions to the Chamber Series are also on sale now. Five-concert subscriptions are available for $125. All Family Concerts are offered free of charge. (Suggested donation: $10 adults/$5 students).