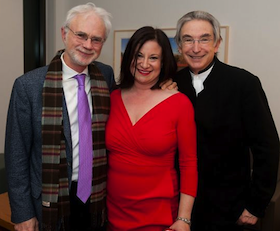 The new pride of Stanford Live, Bing Hall opened just over two weeks ago, and news comes today that Stanford Live Artistic Director Jenny Bilfield is leaving the position she assumed in 2006 to become president and CEO of the Washington Performing Arts Society. She will take the position on April 1 to lead the organization "presenting the finest artists for classical, jazz, dance, and world music performances."

Pulitzer Prize-winning composer and trumpeter Wynton Marsalis, a member of the WPAS search committee, praised the unanimous choice from a large list of candidates, saying that "This is an important moment in the performing arts in America, and under this new leadership, WPAS is in a great position to take advantage of it."

Before joining Stanford, Bilfield held numerous leadership roles in the arts throughout her 21 years in New York City. Best known for her specialized work in the strategic management, promotion, and presentation of contemporary music and cutting edge artists, Bilfield spent 12 years at music publisher Boosey & Hawkes where, as president, she was part of the international management team that led the company’s public-to-private transition.

As Executive Director of the National Orchestral Association and Founder of the New Music Orchestral Project, Bilfield launched new American orchestral works through readings and premieres at Carnegie Hall and Manhattan School of Music. For this work she received an Adventuresome Programming award from ASCAP, and an orchestra leadership award from the League of American Orchestras.

Bilfield will succeed Neale Perl, who has led WPAS since 2002 and will become President Emeritus. During Perl's tenure, WPAS presented some 600 performances (including 100 artist debuts), grew its endowment, tripled its education programs budget, created the Capital Arts Initiative in collaboration with DC Public Schools and Jazz at Lincoln Center, launched a series of free summer camps for underserved students, and expanded WPAS's programming to new venues including: The Music Center at Strathmore, the Atlas, Sidney Harman Hall, and Sixth & I Historic Synagogue.