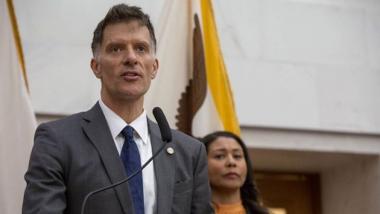 On the Brink With the SF Symphony and Merola Opera Program

With the big summer music festivals around the world canceled by the coronavirus, Summer Olympics postponed by a year, and more recently even Wimbledon and Munich’s Oktoberfest falling victim to long-range cancellations, San Francisco — already left bereft without the Opera Summer Season — now has word on one of the major music events that, as of April 28, was still on the books.

The SF Symphony has bitten the bullet and officially canceled the remainder of its 2019–2020 season. There will be no summer season either; announced April 29, the cancellations go through the end of August.

What made the delayed decision all the more difficult for the Symphony was the significance and grandeur of the concert series marking the final season of Michael Tilson Thomas, 75, as the orchestra’s music director for 25 years.

Agony over the decision had intensified over the past two months as SFS canceled a week or two at a time, with the latest round of cancellations before now through May 10. But with Monday’s announcement of SF Bay Area shelter-in-place orders being extended through the month of May, a big cancellation from SFS was only inevitable.

The fate of one of the last remaining music events of the summer — the Merola Opera Program — is still up in the air. San Francisco’s extended shelter-in-place order affects the city’s Performing Arts Center, which includes facilities used by Merola (and the Symphony’s Davies Hall).

For Merola’s 29 rising opera stars, staff, and faculty, the June–August season is already scheduled a week later than usual because of the way both Memorial Day and Labor Day land in the calendar. Merolini are scheduled to arrive in the city on June 2 — the day after the best-case “reopening” of the city, with public performances slated to start July 9 and conclude on Aug. 22 with the traditional and long-treasured grand finale.

The decision is still pending. Merola Executive Director Jean Kellogg told SFCV on April 27 that the staff has been “monitoring the situation very closely and considering all possible options.” The Merola board of trustees, Kellogg said, will be “meeting (virtually) in the near future to make a final determination.”

At the time of announcing the Class of 2020, Kellogg spoke of “eagerly anticipating another group of outstanding young artists this summer at Merola, and we look forward to providing them with intensive training from some of the finest master teachers in the country to further their careers.”

She also assured everyone that “we will heed all safety measures and government mandates to prevent the spread of the coronavirus. Should it become necessary to truncate or postpone the Merola 2020 Summer Festival, we will immediately contact our patrons and all tickets purchased will be transferable/refundable as requested.”

For the Symphony, in addition to many other considerations, there is the matter of finances. The organization has huge ongoing expenses and, for the time being, no income. The current SFS contract runs through Nov. 26, 2022. It provides for a weekly base minimum salary per musician of $3,263, increasing to $3,570 in the final six months of the contract.

On April 29, the Symphony announced that, with the cancellation of performances through August 31, the orchestra, stagehands, and SFS Chorus have signed on to salary reductions averaging 25 percent. SFS staff are looking at similar salary reductions, and Michael Tilson Thomas won’t be paid for canceled concerts. Everyone will keep healthcare and insurance benefits. These arrangements are for April 19 through Sept. 5.

These “shared-sacrifice” reductions have been made as the Symphony faces more than $13 million in lost revenue and $5.4 million in net losses due to the cancellation of 64 performances, including the remainder of the 2019–2020 season, summer performances and film concerts, and the cancellation of the group’s three-week tour to Carnegie Hall and Europe, scrapped back in March.

These financial moves are consistent with the situation for orchestras across the country. In the last available report, in 2018, SF Symphony was at the top of the charts for musician pay, along with the Los Angeles Philharmonic and the Chicago and Boston Symphonies. Drew McManus’s Adaptistration, a blog dedicated to the orchestra business, put San Francisco in the first place for orchestral salaries, using figures from the current contract.

Based on the most recently available figures, among music directors of major American orchestras, MTT’s $2.6 million salary (on S.F. Symphony’s $75.6 million operating budget) placed him among the three top compensated conductors in the country. The others are Jaap van Zweden’s $5 million salary (bonus-included) with the Dallas Symphony, on a far lower $37.4 million operating budget (he later became music director of the New York Philharmonic at a still-unreported salary), and Riccardo Muti’s $3 million salary at the Chicago Symphony, where the budget is at $79.9 million.

Responding to COVID-19, the New York Philharmonic reached an agreement with the musicians to reduce salaries. Beginning April 1, all musicians, regardless of seniority, are paid the basic minimum salary of $2,952 per week ($153,504 per year).

Although newly hired rank-and-file orchestra members don’t see their pay decrease, that represents a big cut for senior players, whose compensation can be much more. The most recent available figures show that the Philharmonic’s concertmaster Frank Huang earned $622,421. SF Symphony’s Alexander Barantschik, according to an Adaptistration report, received annual compensation of about $600,000.

At the Los Angeles Philharmonic, COVID-response payroll reductions of 35 percent in the aggregate include the layoffs of 94 part-time employees and pay cuts of more than 35 percent for the leadership team. Orchestra members are receiving 65 percent of their weekly minimum scale beginning April 20, and Music Director Gustavo Dudamel stopped taking salary, estimated at $1.5 million. The Philharmonic maintains health insurance for all full-time employees.

The SFS programs for June that have been axed include:

Let’s hope the fall season, Esa-Pekka Salonen’s first at the helm, will be intact. At this point, nothing is certain.

Fate of this summer’s Merola Opera Program is still up in the air.

In a finely balanced season, the orchestra will feature a few crowd-pleasers from unexpected sources.

The Art of the Pivot: Local Music Organizations Cope With COVID-19

Administrators from the Vallejo Symphony, Voices of Music, and Fremont Symphony talk about quick decisions and hard calls in a time of crisis.