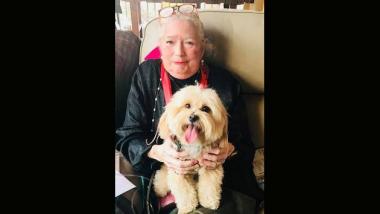 The City and Opera World Say Farewell to “OperaSuzy”

As torrents of email, Tweets, and Facebook posts indicate, in San Francisco and in the global village of opera, the best-known and most-loved person who is not a performer was Suzanne Turley, with the email address of “OperaSuzy.”

The outpouring of grief was palpable in reaction to the news that she died on Friday in her Dolores Heights home, at age 81. The common expression “died at home” is especially poignant in her case because for years now, Turley has been shut in her house, surviving with oxygen as her COPD (chronic obstructive pulmonary disease) progressed.

It was with portable oxygen tanks that she last attended SF Opera and Merola performances, unhappy, in 2018, that she couldn’t repeat her many experiences of being at all cycles of the 16-hour Wagner Ring. Her love of opera and artists began in 1950 and permeated her life to the very end.

Besides supporting generations of Merolini, Adler Fellows, and other young artists, sponsoring and even hosting many in her home, Turley’s large and yet intimate circle grew through time. A close friend, Joanie Juster, writes:

To generations of musicians and music lovers she was a mentor, a counselor, a fairy godmother, and the best possible friend. She elevated friendship to an art form.

Even as her physical world shrank to just her favorite chair, she spent all day every day keeping up with an enormous circle of friends around the world: calling, texting, Facebooking, sending cards, letters, and little gifts.

She never missed a birthday, an anniversary, a debut, a performance. She delighted in everyone’s triumphs, cherished the photos of their children, and adored their pets.”

Turley was born in Oakland’s Peralta Hospital on June 12, 1939. Her father was Thomas Francis Turley Jr., her mother Constance Eleanor Turley (née Ramacciotti). She grew up in Kensington, went to Anna Head School for Girls, and attended UC Berkeley, where she studied art history. She worked in a variety of positions, briefly for SF Opera, and volunteered for many organizations, including SF Symphony. Turley’s husband, Bill Jackson, died in 2007.

Turley’s passion and enthusiasm were legendary not only for opera but for many causes, not least about politics. “At least I voted before I’ll go,” she told me last week. Through the years, she has gone into battle for young artists, at times even against big organizations if they “did wrong.”

Even though her love for opera was born at a Stern Grove Festival performance, when the festival dropped its annual Merola Program and then put opera and classical music on the back burner, Turley made her disapproval known. And yet, being the kindest of souls, she also acknowledged: “After all my kvetching about the Grove management, once there, I had to put that aside because it was a really Grand Opera afternoon. It was an event that could — should — have gone on forever, as it was on such a high and wonderful level from everyone.”

The Grove was the venue for her first experience with staged opera, when her parents took her to a Pacific Opera Rigoletto in 1950. Seven decades later she remembered it all (except who sang the title role):

“The Duke was Cesare Curzi who sang with SF Opera on the advanced Adler Fellow level. Arturo Casiglia was in the pit. Peggy Overshiner was Gilda and John Lombardi was the Assassino. Dang, the hunchback’s name fails me. The Grove was less chopped up than it is now.

“No amplification, natch. Old flats and potted bushes for sets. Sitting on the wall at the rear I heard every note well, if not loudly. I went backstage — easy then — totally star-struck by the young tenor who became a mentor of a kind. Between him and the music teacher at my school, I got to super in a couple of shows at the original Berkeley Opera and Woodminster in Oakland. And I was a goner for opera both on the radio and that first foggy day in the Grove.”

Starring in the title role of Rigoletto in that postwar period of flowering at SF Opera were Leonard Warren, Lawrence Tibbett, Enzo Mascherini, Robert Weede, and Giuseppe Valdengo, but there is no record of the cast in the Grove. Arturo Casiglia was SF Opera Chorus Master a quarter century before the event recalled by Turley, and he died in 1954.

Correction: The indented quote is from Joanie Juster, not Eric Stevens as stated in the article as originally published.

SF Opera to Resume Streaming Productions From Past Seasons

Classic performances of Tosca, Attila, and The Marriage of Figaro are slated for October.