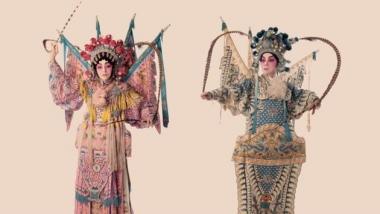 Cultural Interplay in Music and Dance at CAAMFest 2018

Going beyond its already huge range of Asian and Asian American subjects, San Francisco’s Center for Asian American Media ranges even further with its 36th annual festival, called — rather densely — CAAMFest36, held May 10-24 in San Francisco and Oakland.

A prime and fascinating example of that geographic/cultural expansion is the documentary Havana Divas, screened on May 20 in the Roxie Theater.

S. Louisa Wei’s film follows Caridad Amaran and Georgina Wong, who learned the art of Cantonese opera in 1930s Havana. The city’s Chinatown back then was a thriving cultural center for the estimated 200,000 Chinese immigrants living in Cuba, supporting a Cantonese opera company, three newspapers, and a cinema.

Throughout the 1940s, Caridad toured cities in Cuba with Chinese communities, as one of the leading actresses of the opera troupe. Georgina quit opera to attend college, but her study was interrupted by Castro’s 1959 revolution and her required military service. Eventually, she went on to become a diplomat. After retirement and well-advanced in age, the two are trying to perform Cantonese opera again in a country that changed greatly over the years.

The 2018 festival, entitled “Culture, in Every Sense,” follows CAAM’s programming of recent years, incorporating food and music programs with films. This year, “we wanted to really elevate the immersive experience between culture and community,” says Festival Director Masashi Niwano.

In addition to including four extra days of programming during its move to May that coincides with Asian Pacific American Heritage Month, CAAMFest36 broadens the festival to include even more ways to convey cultural experience through Asian and Asian American artists around the world.

The festival celebrates martial artist Pei-Pei Cheng, known as the Queen of Swords, with an ongoing career of over 50 years, currently starring in Mina Shum’s Meditation Park, which will have its Bay Area premiere on May 15 at the AMC Kabuki 8.

Known for her performances in Come Drink with Me; Crouching Tiger, Hidden Dragon; and many more films, Cheng will also be seen at CAAMFest in screenings and in conversation on May 14 at Chef George Chen’s Chinese food and retail emporium, China Live.

Brenda Wong Aoki, the prominent storyteller and activist, will perform Aunt Lily’s Flower Book, dealing with “100 years of legalized racism,” on May 24 in Herbst Theater. The performance is set to music by Emmy Award-winning composer Mark Izu and koto master Shoko Hikage. A “Power of Personal Story” talk before the show is led by psychologist and filmmaker Satsuki Ina and CAAM Executive Director Stephen Gong.

A round-the-world tour in dance celebrates its anniversary.

A new film celebrates the choreographic artistry of the legendary film director.