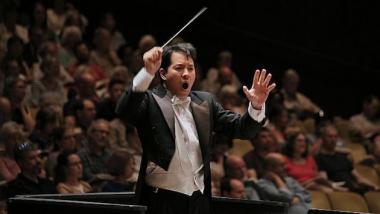 The shifts of mood from grief and near despair to hope and faith ... culminate in the ecstasy of the final “Quando corpus morietur,” with its overwhelming confidence. In the dying minutes of the Stabat Mater, the orchestra goes silent and the choir breaks out unaccompanied into an amazing hymn of praise: “When my body dies, grant that to my soul be given the glory of paradise.

As the title of David Vaughan’s essay says, Antonín Dvořák’s Stabat Mater is “One of the Most Powerful Declarations of Faith in Musical History.” It is on the next program of the Berkeley Community Chorus & Orchestra (BCCO), June 2–4 in UC Berkeley’s Hertz Hall. As is usual for BCCO, admission is free, donations are accepted.

Vaughan describes the dramatic circumstances of the cantata’s birth: “Dvořák began work on the piece in 1875, when his joy at his first successes as a composer, and his happy family life, were shattered by personal tragedy. His daughter Josefa died at just two days old, and as a man with deep religious beliefs, Dvořák began work on the Stabat Mater as a way of coping with his grief.” Then in 1877, his two other young children died, and Dvořák immersed himself in the work and soon completed it.

BCCO’s Luke says that although some of the piece is sad and poignant, the ending feels exuberant and triumphant. Lawrence DiConstanzo, a bass in the chorus, says “If you’ve ever had a sick child and wished you were sick instead — well, that’s the Stabat Mater. It asks us to come in and share. It makes us realize this sharing, this empathy, is in our blood. The Stabat Mater is threaded together with love.”

Among all the busy, creative, struggling, happy community music groups, Berkeley Community Chorus & Orchestra has a special place with its long history (founded in 1966), size, dedication, and work ethic. Just as with the Dvořák, the chorus takes on big, demanding works, recently the Mozart and Cherubini Requiems.

The singers’ hard work includes attention to the technical details of making music, such as warming up the TMJ (temporomandibular joint), the hinge that connects the jaw to the temporal bones of the skull, in front of each ear (see photo), and the matter of some pesky consonants.

“When I open a new score,” says veteran chorus member Janice Murota, “one of the first things I do is cross out all the ending r’s as Ming Luke always instructs us to do since the r will be heard even if we don’t sing it. If the entire chorus is saying ‘r’ aloud it spoils the lyrics. Ming always says ‘It’s not what we say, it’s what the audience hears that matters.’ When 230 people sing ‘r’ you lose the vowel sound and can’t tell what the word is.”

On the other hand, when there is an r to be rolled, Murota has a different problem: “I’ve spent literally decades trying to learn how to roll my r’s. I’ve gone from lip trills to vibrating the posterior pharynx to now a coarse tongue roll which I can’t control enough to sing. My kids used to protest vehemently as I practiced this while driving. I needed a box of Kleenex in the car.”