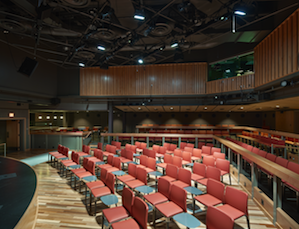 Last weekend the San Francisco Exploratorium unveiled what its principal creator calls "a ground-breaking project in theater design." That's the verdict of Adam Shalleck, whose company led a collaborative effort to set up a 3,600-square-foot multidisciplinary theater space.

Shalleck Collaborative, Inc., Meyer Sound Labs, and the architecture firm EHDD have worked together on the facility, which is described — perhaps with a bit of exaggeration — as "the beginning of a new era in how presentation auditoria will be conceived." Shalleck's description:

It’s a departure from the traditional ranks of rows of seats, facing a "sage on stage." The room has three seating levels: the flat floor in the front of the elevated stage is surrounded with wide, elevated terraces, all provided with movable chairs of varying heights for sightlines, space for tables, and drink and gadget rails. Its casual configuration puts the audience at ease. Between its configuration and the sound system, audience interaction happens naturally. There is a bar in the room which gives it a relaxed feel, and the window to the bay connects you back to San Francisco.

The Kanbar Forum will be used for talks, film screenings, live music, training sessions, and a variety of special events, including an upcoming series called Resonance, which explores the technology, culture, and perception of sound.

Over the past 25 years, I’ve studied what timeless aspects make a great theater space — this project had us looking at the direction of culture, teaching, and presenting. We started by conceiving a space with the relaxed feeling the Exploratorium wanted to give their visitors, and then applied new technological tools that allowed us to achieve excellent conditions in the room for a wide variety of uses. The approach is scalable and can find a place in theatre and education.

Ian Hunter, Shalleck Collaborative's AV Designer for the Kanbar Forum, describes the Constellation system for the venue as "providing different acoustic conditions based on the intended use. In basic modes it can support amplified lectures and media and then stretch the sense of sound reverberating through the room. It can also take surround sound to a new level. Sound artists can create soundscapes, and one venue can share and mimic an acoustic experience with other facilities that have the same system.

The "audio toolbox" also includes SpaceMap multichannel panning, a technology that allows sound designers to fly sounds through space. SpaceMap is used in Fathom, a sound installation by Shane Myrbeck and Emily Shisko as part of the series Soundscapes. A sound reinforcement loudspeaker system in the venue features UPQ-2P and MM-4XP loudspeakers, UPJ-1P and UPJunior™ VariO™ loudspeakers, and 600-HP subwoofers with a Galileo® loudspeaker management system.

More than 120 additional Meyer Sound loudspeakers are installed in 11 other locations around the Exploratorium, including the Webcast Studio, the Bay Observatory Gallery, the outdoor Exploratorium plaza, the retail store, conference rooms, and classrooms.